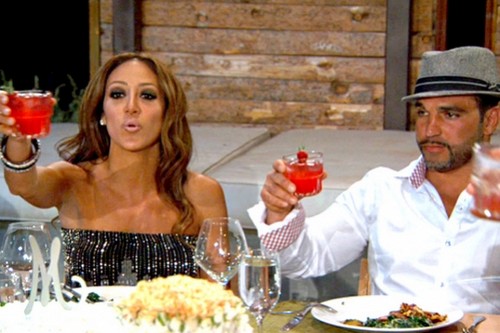 Tonight on BRAVO our favorite Housewife show THE REAL HOUSEWIVES OF NEW JERSEY returns with and all new episode called, “Zen Things I Hate About You.”  On tonight’s show the Housewives are on shaky ground during their final day in the Arizona desert. To get caught up for tonight’s crazy episode if you missed last’s week, you can read our full and detailed recap, right here.

On last week’s show an unorthodox therapy brought the Housewives up close and personal with a horse’s hoof, opening old wounds and leaving Caroline in tears over an admission from her husband. A traditional Native American drummed circle plays backdrop as Melissa and Jacqueline faced their trust issues and Kathy finally took a stand. In a shocking moment of truth, Teresa’s husband, Joe, made a revelation about his current legal issues that leaves everyone speechless.

On tonight’s show the Housewives are on shaky ground during their final day in the Arizona desert as a high-wire course 30 feet in the air proves to be the ultimate trust test between sister-in-laws Teresa and Melissa. As alliances grow stronger between Teresa and Jacqueline, tensions between Teresa and her brother Joe boil over, forcing Caroline and Kathy to intervene during a heated showdown.

Tonight’s episode is going to be filled with more crazy Housewife drama that you won’t want to miss, so be sure to tune in for our live coverage of the show tonight at 8 PM EST! While you wait for our recap hit the comments and let us know how excited you are about the new season of The Real Housewives of New Jersey! Also we have a sneak peek video of tonight’s season 5 episode 15 below!

RECAP: The resort lodge is for rest and relaxation but these guys are getting really bored. The guys have a moment to themselves and all they can do is cause embarrassment. They’re too loud. Everything from their farts to their belches. The other patrons just had to give them the evil eye.

Meanwhile Teresa and Melissa are “friends” for now. So much so that she can tease Melissa and Joe for being a little bit too intimate in front of company. There’s nothing like seeing you baby brother suck his wife toes. That’s a new way of bonding.

However Carole feels that two women are just playing it out without any commitment to honestly work through things. Everything goes back to the horse therapy. They couldn’t work with the horse because neither could open themselves up.

Later as a full group they enjoy a new activity. They have to walk across a tight rope in pairs. It’s a mechanism to help people to lean on and trust each other. The first group to go up is Teresa and her brother. They’re able to laugh and Jo is really good and trying to get Teresa to overcome her fear. They don’t make it across but they did at least bond.

Still what comes up must come down. Teresa goes up again this time with Melissa. The two actually made it further than everybody else. Just as their relationship is starting to good though Melissa’s Joe got tweets from enemies of his wife. They restarted the cheating rumors.

Getting ready for dinner Joe tells Melissa about the tweets and the two get talking they open up the Pandora box of whether Teresa was involved. Melissa swears she won’t believe Teresa started things again for now. She says she wants to keep an open mind but then when it came to her dinner toast she went out of her way to snub Teresa.

Caroline picked up on that. Caroline being the busybody she is decides to tell everyone to hash it out. She asks them to finally clear the air. In a matter of seconds the zen like quality everyone had been experiencing suddenly evaporates.

Joe Gorga wants and in desperate needs his sister to apologize for the cheating rumors. Despite her many denials he always believed it was her filtering out information. So he confronts her. Teresa says she never told anyone Melissa cheated on her brother and she sticks to that story. Melissa doesn’t trust her and you can see why Joe still have suspicions.

They only way Joe will trust his sister is if she goes with him and his wife to confront Penny. Penny started all of this to hurt his family and Teresa should be with him. Teresa doesn’t think its any of her business and doesn’t want to go. She says it would give Penny more attention than she deserved. Well her brother can’t take that response and loses his infamous temper.

After Melissa demand he cools off he returns and through the help of everyone else Teresa and Joe forgive each other. Teresa will go with Joe to confront the rumors. But will he find out his sister was never a apart of it or was she the instigator?