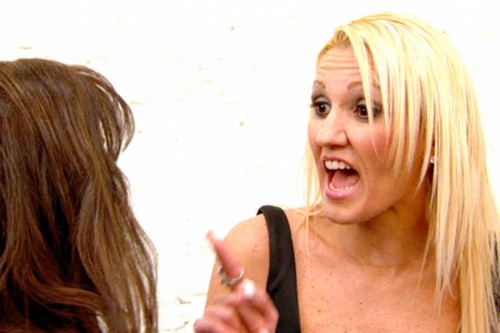 Tonight on BRAVO our favorite Housewife show THE REAL HOUSEWIVES OF NEW JERSEY returns with and all new episode called, “Hair We Go Again.”  On tonight’s show Teresa and Jacqueline face attacks on their integrity as the opening of a new boutique brings them face to face with their enemies. To get caught up for tonight’s crazy episode if you missed last’s week, you can read our full and detailed recap, right here.

On last week’s show Jacqueline and Teresa’s relationship takes a surprising turn as Jacqueline faces her paralyzing fear of public speaking. While Caroline weighs the pros and cons of selling her family home, Kathy’s cannolis score a sweet promotion and Melissa’s singing career attracts a new audience. But when a gossip queen resurfaces with an unsettling secret, the Gorga-Giudice pact is put to the test.

On tonight’s show The heat is on for Caroline’s boys as they open their new restaurant and face their harshest critic yet. Meanwhile, Melissa travels to Orlando for a test of her own: a live radio performance that could reignite her music career. Back in NJ, both Teresa and Jacqueline face attacks on their integrity as the opening of a new boutique brings them face to face with their enemies.

Tonight’s episode is going to be filled with more crazy Housewife drama that you won’t want to miss, so be sure to tune in for our live coverage of the show tonight at 8 PM EST! While you wait for our recap hit the comments and let us know how excited you are about the new season of The Real Housewives of New Jersey! Also we have a sneak peek video of tonight’s season 5 episode 17 below!

Season 5 of Real Housewives of New Jersey is almost over. This week’s episode “Hair We Go Again” takes us one step closer to finding out who started the cheating rumors about Poison Joe and J-Lo wannabe but she sucks Melissa Gorga. They have been plagued by Twitter attacks for the last two years, as well as whispers in their community. Poison and Mel are have had enough and quite frankly so have I. The show has become boring. Hopefully this story line will be done for good after next week’s season finale.

This week’s episode centers mostly on Melissa. First we see Mel and Poison head to Orlando, Florida. J-Lo Light was invited by music manager Johnny Wright to his compound. She will go through a boot camp to get her ready for an audition the next day. Mel’s singing will be put to the test when she auditions for radio station XL 106.7. She will sing live the song Justin Lange wrote for her “Never Let Me Go”. If the radio station likes her performance they will play the song on their radio station, and Johnny will become her manager. Mel’s work with the vocal coach is cringe worthy. She messes up several times and nervously laughs. The vocal coach is visibly annoyed and frustrated as he tries to work with her. J-Lo Light says in her talking head “I’m not feeling it. It doesn’t sound right.” Well, all her hard work paid off. Mel’s awful performance won over the radio station and the studio audience. She will now sing live for a show sponsored by the radio station for 150,000 people and be signed to Johnny’s WEG Music.

Mel is now in the company of Justin Timberlake, Britney Spears and the Jonas Brothers. The home page for WEG Music is a collage of pictures of the label’s artists, including Melissa. Her picture looks out of place with the others. The label’s artists are award winning singers and song writers, and now they have a housewife in the mix. J-Lo wannabe is an amateur with a horrible voice and awkward dance moves. Reviews of her song on iTunes are vicious. What did Johnny see in Mel that made him want to get to know her? The music she put out independently was a very, very modest success. Last week Johnny gave Melissa and Poison the hard truth about working in the music business. Poison was on board but Melissa was hesitant about the work she had ahead of her. Why would Johnny sign an artist to his label who is wishy washy?

Also in this episode the Gorgas have a second chance to confront Penny Drosos at Kim De Paola’s Posche 2 grand opening party. Melissa asks Penny to speak with her and her sister-in-law Teresa Giudice. Penny is asked again who put her up to spreading the cheating rumors. She points her finger at Teresa. Of course Tre goes on the defensive and denies involvement in hurting Mel. Penny goes on to say Teresa knew about Strippergate and wanted to destroy Melissa. The women get into a huge shouting match. Earlier in the episode Poison said Teresa always had to be right even when she was wrong as far back as five years old. Their family didn’t think much of it, but now Joe says he will not put up with it anymore. Mel said she feels Teresa had to be involved in spreading the rumors because some things that were said were personal. Mel isn’t sure of Penny’s credibility but at the same time she has Tre’s side of the story, too. She wanted to drop the matter but Poison pushed her to talk to Penny a second time.

Jacqueline Laurita also confronts Penny at the Posche 2 grand opening. Penny’s husband Johnny the Greek has been trashing her and her husband Chris on Twitter. He says the Lauritas made up a story regarding their son Nicholas’ autism diagnosis just to get attention. Penny won’t name who put her and her husband to spread horrible stories. All she will say is someone is talking trash about Jacqueline and that’s where her information originates. Jacqueline questions why Penny would want to hurt her when the two women have never met.

Next week on the season finale we see more of the confrontation with Penny and we see Poison arguing with Johnny the Greek. There was a physical fight that was originally going to air but for legal reasons a lot of footage was cut. The Lauritas and Poison are being sued by Johnny for assault. The case goes to trial next month.