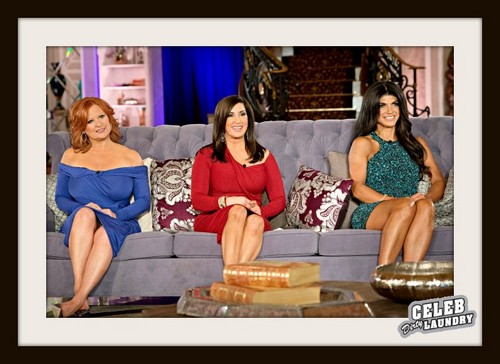 Tonight on BRAVO our favorite Housewife show THE REAL HOUSEWIVES OF NEW JERSEY returns with their season finale called, “Reunion Part 1.”  On tonight’s show Everyone’s favorite Garden State ladies come together to discuss some of this season’s most talked about moments. To get caught up for tonight’s crazy episode if you missed last’s week, you can read our full and detailed recap, right here.

On last week’s show the grand opening party took a distressing turn when a new face became involved in a confrontation with the Giudice-Gorga clan. Teresa wanted to clear her name, but harsh accusations left everyone wondering if she was really behind rumors about Melissa’s marriage. Kathy, Jacqueline, and Caroline tried to focus on their own families, while struggling to repair the damage that had been done…

On tonight’s show during the 90-minute Reunion Part 1, everyone’s favorite Garden State ladies, Joe Giudice, Joe Gorga, and Kathy’s sister, Rosie, come together to discuss some of this season’s most talked about moments. From Melissa and Teresa’s honest feelings towards one another to the current state of Teresa’s relationship with her brother, Joe, and the cast trips to Lake George and Arizona, the group reflects back on the antics from the season. Dr. Venus Nicolino, “Dr. V,” also drops by to see where relationships stand since the cast’s trip to Lake George.

Tonight’s episode is going to be filled with more crazy Housewife drama that you won’t want to miss, so be sure to tune in for our live coverage of the show tonight at 8 PM EST! While you wait for our recap hit the comments and let us know how excited you are about the new season of The Real Housewives of New Jersey! Also we have a sneak peek video of tonight’s season 5 reunion below!

This reunion was much tamer than the season 4 reunion. However, there was still a lot of drama. Old fights resurfaced and tension was high at some points in the show. This was bound to happen since Andy Cohen asked questions about topics the families tried to put behind them.

Per All Things Real Housewives neither Kim DePaola nor Penny Drossos were invited to attend the taping. Teresa Giudice brought her lawyer Henry Klingman to the taping. She wanted him to advise her about answering questions regarding her and her husband Joe Giudice’s fraud case.

Part 1 of the reunion centered mostly on the feud between Teresa, her brother Poison Joe Gorga and his wife Melissa I want to be J-Lo Gorga. It was the same stuff over and over again. There was discussion of the retreat in Lake George and the brawl at the Posche 2 grand opening. They played a clip of Melissa doing a talking head during the retreat where she says “I will swallow my pride and make up with his sister”, referring to making up with her husband’s sister. Tension is still high between the two women because Melissa is not ready to move past what happened. During the show Poison said he forgives Teresa, but Melissa recently said she doesn’t think the truce between her and her sister in law will last.

Melissa asked Teresa why she wasn’t angry at her haters. When Danielle Staub was the problem for the cast Teresa flipped a table and chased Danielle through a country club. Teresa said she is not that person anymore. J-Lo wanna be didn’t buy it. Melissa accused Tre of having an army of people out to get her, but Teresa said Mel’s sisters did the same to her on Twitter. The two women argued about having feelings hurt. Melissa said to Teresa “It sucks having bad stuff said about your marriage doesn’t it?” Teresa didn’t know what to say. Luckily Teresa’s cousin Rosie Pierri stepped in to end the argument.

Next Teresa was asked why she is still friends with Kim DePaola. Teresa says Kim was not involved in any of the drama. The rest of the cast don’t believe it. Kim D has been in the room when a lot of things have gone down so the cast feel she is an instigator. When asked about her relationship with Penny Drossos Teresa claims they are not friends. Pictures of them together were at events only.

Dr. Venus Nicolino made an appearance and gave her opinion on the state of the families. She previously concluded the Giudices and the Gorgas in Lake George. Dr. V. was impressed at how far they have come in repairing their relationships. She asked Teresa what she learned from their session. Teresa said she learned it’s ok to say your sorry and own up to what you did. Dr. V asks what the group still needs to get closure. Caroline says she needs the truth. She feels Melissa and Teresa have not been truthful, and uses the equestrian exercise in Arizona as an example.

There were other highlights to the reunion. Andy touched on a hot button issue for Caroline Manzo. He asked her about the cheating rumors surrounding her husband Albert. Caroline defends him, saying it’s unrealistic to think he would be faithful in their long marriage. They talk about this topic all the time and Albert denies cheating on his wife. Despite Caroline’s denial rumors of infidelity are still circulating.

If Albert isn’t cheating he still is in a rocky marriage with this controlling, demanding woman. Clips were shown of the Manzos marital issues from earlier in the season. It got to the point where their oldest son Albie asked his mother about the state of Caroline and Albert’s marriage. Caroline told Albie they are good and not to worry about it.

Andy glossed over Kathy Wakilie finding her voice and Jacqueline Laurita dealing with her son’s autism diagnosis. There wasn’t much to say.

In part 2 of the reunion Andy will ask the Giudices about their fraud indictments. Also, there is a showdown between Caroline and Teresa.