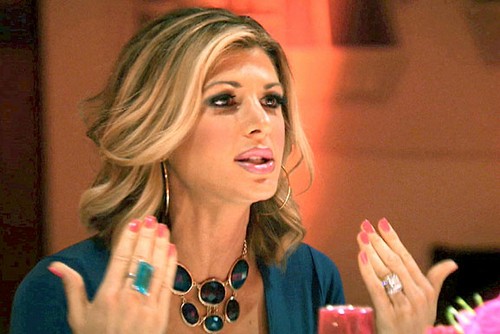 THE REAL HOUSEWIVES OF ORANGE COUNTY returns to Bravo tonight with a whole new episode called, “It’s My Party and I’ll Scream If I Want To.” On tonight’s episode Lydia and Alexis are surprisingly invited to Tamra’s party at her new gym. Did you watch last week’s season premiere? We did and we recapped it here for you HERE!

On last week’s show Vicki invitedAlexis to be the first to meet her new grandson, Troy. Meanwhile, Tamra and Gretchen shopped for baby gifts, and as Tamra tried to get her relationship with Vicki back on track, Vicki threatened to derail their progress. Heather met with Lydia McLaughlin about featuring her house in Lydia’s magazine, but Heather won’t give up the goods without a promise of the cover.

On tonight’s show Alexis is shocked when Vicki invites her to a party at Tamra’s new gym — but not as shocked as when she finds out that Tamra says it’s OK. Lydia makes a splash when she reveals that she’s been invited to Tamra’s party — by her old friend Alexis Bellino. Meanwhile, Gretchen and Slade try to keep their relationship strong while dealing with challenging personal issues close to home. Then, on the night of the big party, Tamra wonders if she’s made a huge mistake by allowing Alexis to come when things quickly spin out of control.

Vicki and Alexis are hanging out at Vicki. Alexis gives her a post operational gift. Everything is going fine until Vicki asks Alexis to her date to Tamra’s dinner. Vicki claims not only does she need Alexis but Alexis now wants to invites Lydia. After getting Tamra’s permission, Vicki’s now  bringing her plus two.

Heather is going to be on the radio.  She’s filling in for empty spot. But even if its fill in, Heather is happy to have some sort of career again. Although she loves her children, she feels that there’s an empty spot in her life that only a career can fill.

Lydia and Alexis are enjoying their children’s play date. They begin talking when the conversation turns towards Heather.  Alexis isn’t surprised that Heather had brought up her cubic zirconia ring. She uses it to ask Lydia to be her moral support.  Lydia agrees.

Heather and Terry are going out to a dinner date with Lydia and her husband, Doug.  They discuss the magazine shoot. Doug tells them they can’t be on the cover, they save that for household name.  So of course Heather turns down the photo shoot. Alexis is brought up. Lydia tells them that she’s going to Tamra’s party. Heather basically tells her that when she enters the situation eventually she’s going to have to choose sides. That upsets Lydia because she didn’t expect to be brought into all the drama.

Slade has to leave. Gretchen isn’t taking it well. They usually aren’t separated for unspecified amounts of time.

Tamra is preparing for her dinner. She’s getting stressed out and taking it out on Edie. She’s regretting allowing Alexis to come. She feels Vicki is setting her up.

Anxious is the word floating around. Lydia is still going with Alexis despite Heather’s warning. Alexis is hopeful everyone can sit down civilly. Heather and Gretchen are having pre-dinner drinks. They both don’t want Alexis at the dinner especially Gretchen who feels Alexis is asking for it by attending.

Before everyone even gets there, Tamra has already tagged Lydia as guilty by association. Tamra tells Heather and Gretchen how she was put on the spot.  Tensions are already at an all-time high when Alexis shows up with Vicki and Lydia in tow. Everyone is fake smiling and pretending to be comfortable but Lydia is feeling the awkwardness. Conversation is halting when Gretchen and Vicki go at it… all under their breath.

Finally it’s time for dinner. Vicki says she’s hoping for them all to start over. When Tamra says she’s surprised Alexis came. A fight breaks out. Alexis tells Tamra she’s willing to have a one on one with everyone later. The main problem is Heather, Alexis, and Gretchen. All three keep wanting to fight with each other.

Tamra is saying she was gracious to invite Alexis. Somehow this opens up to another argument that erupts into Tamra throwing Alexis out of the party. She then turn towards Vicki and gives her an ultimatum. If she’s with Alexis, she can leave too.

On next week’s promo the fight continues on. Alexis is waiting in the limo while Vicki and Lydia try to calm her down. Also Vicki’s is having some problems with her family.