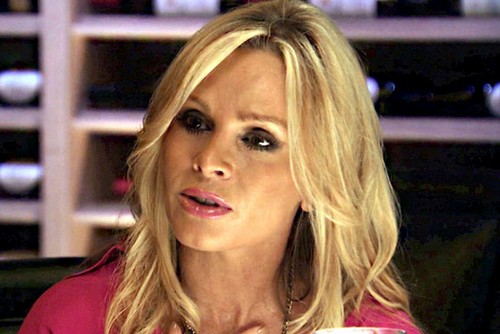 THE REAL HOUSEWIVES OF ORANGE COUNTY returns to Bravo tonight with a whole new episode called, “Making Up Is Hard to Do.” On tonight’s episode Vicki introduces Troy to Alexis, while Heather meets new Housewife Lydia. Did you watch last week’s season premiere? We did and we recapped it here for you HERE!

On last week’s show Heather’s clambake continued, where Vicki’s facial “tweaking” became the topic of catty gossip. After a confrontation and tear-filled dinner, Vicki and Tamra attempted to repair their lost friendship. Terry’s need to constantly make jokes rubbed Heather the wrong way, while Alexis and Jim’s ballroom dancing lesson rubbed them the right way. Gretchen visited Slade at the radio station to support his new endeavors, and Tamra got more than she bargained for when Eddie expressed his concerns about Vicki.

On tonight’s show Vicki invites Alexis to be the first to meet her new grandson, Troy. Meanwhile, Tamra and Gretchen shop for baby gifts, and as Tamra tries to get her relationship with Vicki back on track, Vicki threatens to derail their progress. Heather meets with Lydia McLaughlin about featuring her house in Lydia’s magazine, but Heather won’t give up the goods without a promise of the cover.

Vicki is having an at home when Alexis comes by with gifts for the baby Troy.  Everyone is bonding over Troy and talking motherhood. They are enjoying a healthy lunch when Brooks enters the discussion. Vicki reiterates that her relationship is a huge question mark while Brianna wants her mom to find a better guy.

Heather goes to her husband’s office. After joking around for a while she tells him about a magazine offering her a spread on their house. But her husband feels if its not the cover then they don’t need to bother.

Gretchen and Tamra are baby shopping for Troy. Tamra makes Gretchen try on some of the mommy things especially with Gretchen wanting to have baby soon. Tamra doesn’t think Gretchen is ready for a baby but Gretchen and Slade are finally where they want to be finically.

Vicki is going over some paperwork when her daughter and grandson come over. Brianna tells her mother that it’s hard with everyone else at work and how it would be weird if her mother brought someone over. Brianna doesn’t like Brooks and says if her mother brings him over, she and her family will leave. Despite claiming she and Brooks have broken up. No one believes her.

Heather meets with the lady from the magazine, the newest housewife, Lydia. She’s automatically thrown when she gets a hug instead of a handshake. Heather tries talk her house into the cover. Everything is going fine until Heather mentions she’s friends with Alexis. Things go further downhill when Heather notices Lydia’s ring and Lydia mentions that her’s is at the jeweler’s. So Heather being herself asks Lydia if it’s a real ring. It is real but it’s a loan while her actual ring gets fixed.

Tamra is at the studio waiting for Vicki when she decides to call Edie to tell him about the meeting. Vicki drives across the street to meet Tamra. Vicki finds out that Tamra doesn’t have any insurance. They seem to be doing fine and decide to meet up for dinner.

The new housewife, Lydia, has two young children. She and her husband both grew up in money but they want to instill some values in their children.  They met at Christian volunteer meeting. She explains she chased him. Now they are entrepreneurs with various businesses. Lydia explains to Doug about Heather and her demands for the cover. He doesn’t look like going to give it to Heather so Lydia tells him he’s going to be the one to her.

Vicki and Tamra are on an awkward date. Both are nervous when they decide to break the ice. Vicki tries to claim she never wanted the friendship to fail but she did feel let down by Tamra. Tamra hits back that Vicki went for her even harder this last year. Vicki explains that she was lashing out after so many people didn’t give Brooks a chance. They end their dinner peacefully but Tamra feels that only after Brooks lets her down will Vicki truly return to her.

Heather and her family get set to head to Temple for Yom Kappur. Terry feels this year is he has to work at his daddy duties harder. Particularly Heather feels like he needs to take a more active role. Her youngest Colette “the willful one” created a scene at Synagogue and Terry had to take her out but she escaped back in. Heather is upset that Terry doesn’t have more of a handle on their daughter.

Vicki calls Tamra. She wants to know if she could invite Alexis to Tamra’s party. Tamra agrees to have Alexis but regrets it automatically.

On next week’s promo Tamra is having her dinner when a fight with Alexis escalates. Did Vicki invite Alexis to a better person or did she do it to cause drama?