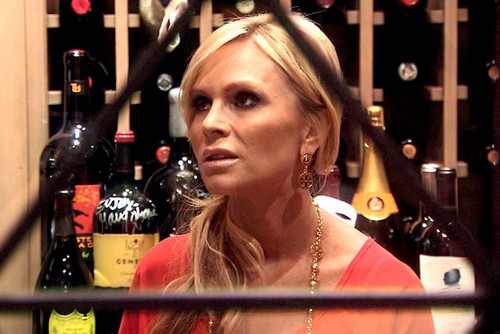 THE REAL HOUSEWIVES OF ORANGE COUNTY returns to Bravo tonight with a whole new episode called, “Evil Eyes and Evil Faces.” On tonight’s episode Vicki and Tamra try to mend their friendship, without Eddie’s blessing.  Did you watch last week’s season premiere? We did and we recapped it here for you HERE!

On last week’s show the ladies were back with the season 8 premiere.  The women were navigating a minefield of fractured friendships. Vicki embraced the joys of “grandmotherhood” when daughter Briana gave birth to a baby boy. Tamra moved in with fiancée and new business partner, Eddie, while Gretchen had to deal with her business ventures alone, as longtime boyfriend Slade got a job of his own.  Heather threw an East Coast-style clambake in her West Coast backyard, but refused to invite Alexis. The clambake reached a boiling point when Vicki and Tamra come face-to-face for the first time since last year’s brawl over Vicki’s beau, Brooks.

On tonight’s show Heather’s clambake continues, where Vicki’s facial “tweaking” becomes the topic of catty gossip. After a confrontation and tear-filled dinner, Vicki and Tamra attempt to repair their lost friendship. Terry’s need to constantly make jokes rubs Heather the wrong way, while Alexis and Jim’s ballroom dancing lesson rub them the right way. Gretchen visits Slade at the radio station to support his new endeavors, and Tamra gets more than she bargained for when Eddie expresses his concerns about Vicki.

Tonight’s episode is going to be filled with the usual Housewife drama and you won’t want to miss it, so be sure to tune in for our live coverage of the show tonight at 9 PM EST! While you wait for our recap hit the comments and let us know how excited you are about the return of  “The Real Housewives of Orange County.

Back at the dinner, Vicki and Tamara embrace but they aren’t restarting that friendship. Tamara and Gretchen can’t help though but talk about Vicki’s work. Vicki is enjoying herself when Heather asks about Brooks. Vicki admits they’re taking a break.

Everyone has set down when Heather makes her toast about ending the summer on a good note. Tamara’s fiancée has to leave the party early because of permits for their gym. Tamara likes owning 51 percent of the business and enjoys sending Eddie to do the grunt work. However him leaving early has left only her to dance around wedding questions. Everything is going fine until Gretchen brings up Brooks.

They calmly talk about their relationships until Gretchen brings up Tamara. They’re just laughing and fooling around when Tamara notices that they’re having fun. Vicki jokily turns Gretchen and says Tamara is giving them the “evil eye”. Which just happens to be a trigger for Tamara. It brings up all the drama from last season.

Vicki and Tamara discuss what lead up to the fight last year when Tamara leaves the table in tears. Heather goes after her and tells Tamara to get it together. Tamara does come back to the table and everyone pretend like nothing happened except for Gretchen who ask her if she’s ok.

Alexis and her husband, Jim, are taking dancing classes. They had some marital troubles last year, but seem to be doing better. Yet She’s still hurt about losing Gretchen.

Tamara hears from Eddie that their permits have been approved. In the spirit of this good will Vicki congratulates Tamara. Taking it upon themselves to fix their relationship, both women go off to talk about their relationship. Vicki mentions how she’s in pain because she can’t be with Brooks. They both apologize, with Vicki saying to the cameras she’ll forgive but never forget.

Tamara leaves with Gretchen when Gretchen harps on Vicki being a liar. Tamara sees through her ranting.

Alexis and Jim view one of their new businesses, which is on the brink of being a good investment. She also denies being fired from Fox; instead she scaled back on somethings in order to focus on her family.

On his radio show, Slade brings up Vicki. He refers to her as a Muppet that turned into Mickey Rourke. Gretchen visits Slade at the studio. It doesn’t appear that she knows about what Slade had said about Vicki. Anyway she’s just happy to see Slade in his environment.

Vicki house is under construction. Her daughter is tired of it especially with a newborn around all of the mess. But she does cut her mother some slack now that she’s a mother herself.  Vicki on the other hand is doing her best to give her daughter space. Although she can’t wait to spoil her grandson.

Tamara and Eddie are at their house when he mentions Vicki. Tamara tells him that she wants the closeness she had with Vicki back. But he tells her that Vicki is full of it and a liar. Eddie definitely doesn’t want to get back with Vicki.

On next week’s promo, we finally meet the newest housewife but the drama between Tamara and Vicki goes up a notch when Vicki invites Alexis to Tamara’s function. Will they ever get back together?