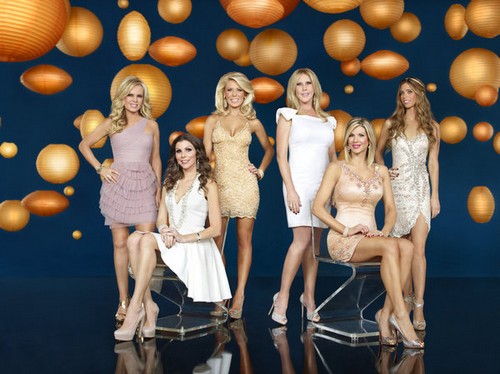 THE REAL HOUSEWIVES OF ORANGE COUNTY returns to Bravo tonight with a whole new episode called, “Bullies and Babies.”  On tonight’s episode in the season premiere the ladies reunite at Heather’s, putting Tamra and Vicki face-to-face for the first time since their fight.  At the end of season 7 at the reunion show by the end of the reunion, friendships were frayed, new alliances were formed, and the women’s relationships with one another might never be the same again.  Did you watch the last reunion show?  We did and we recapped it here for you.

On tonight’s show the ladies are back with the season 8 premiere – the RHOC are: Tamra Barney, Heather Dubrow, Gretchen Rossi, Vicki Gunvalson, Alexis Bellino and Lydia McLaughlin.

The women are navigating a minefield of fractured friendships. Vicki embraces the joys of “grandmotherhood” when daughter Briana gives birth to a baby boy. Tamra moves in with fiancée and new business partner, Eddie, while Gretchen must deal with her business ventures alone, as longtime boyfriend Slade gets a job of his own.

Heather throws an East Coast-style clambake in her West Coast backyard, but refuses to invite Alexis. The clambake reaches a boiling point when Vicki and Tamra come face-to-face for the first time since last year’s brawl over Vicki’s beau, Brooks.

Tonight’s episode is going to be filled with the usual Housewife drama and you won’t want to miss it, so be sure to tune in for our live coverage of the show tonight at 9 PM EST! While you wait for our recap hit the comments and let us know how excited you are about the return of  “The Real Housewives of Orange County!

It’s a brand new season with all the same crazies back for the sequel.  Vicki is redecorating her house and her pregnant daughter is moving in. But that’s not all new changes. Vicki has gotten herself a new face. New nose, chin, and some injections. Maybe she’ll use it when she begins dating again because Brooks is GONE.

Heather is hosting a clam bake the upcoming weekend. Yet she hasn’t invited Alexis. But both she and her husband are feeling some apprehension when thinking about what happened the last time they threw a party.

Tamara and her fiancée are going through with opening their own gym. Luckily she was smart enough to hold the majority share for this endeavor. However things aren’t running smoothly romantically. Tamara even admitted in her aside that she never knew Eddie was so controlling. One point of argument is the redecoration of the house. They are both are very stubborn about what they want.

Vicki’s daughter has gone into labor. Mother and daughter are laughing and sharing in the delivery room. Vicki even admits she was going to be a Nana. Not a lot of women do.

Tamara and Gretchen are BFFs now. They were together when Tamara hears about Vikki becoming a grandma. Tamara is hurt that she’s hearing this information second hand because she and Vicki used to be so close. Now, she and her new best friend Gretchen trash talk about Vicki before moving on to Alexis. Gretchen who used to be close with Alexis has dropped her.  She went as far as to agree with Tamara that if Heather invited Alexis then they’ll be disappointed i.e. royally ticked off.

Vicki’s grandson is born. It’s a special time for Vicki because she’s remembering when her daughter was younger.

Meanwhile Gretchen’s boyfriend has finally gotten a job. Although it’s good that he got a job, Gretchen is still missing him back when he was her “bi*ch”. She keeps calling him at work whenever she confused over doing something for herself.

Alexis has moved and cut her hair, she calls it getting rid of dead weight.  Her marriage appears to be happier. However after hearing about Heather’s clam bake from Vicki; she’s feeling not only bullied but also disappointed in the other housewives. She feels like Heather is two faced and that Tamara stole Gretchen from her.

Heather’s clam bake is coming underway. Due to not knowing who was speaking to who she seated Tamara and Vicki across from each other. Vicki who is already feeling nervous about revealing her new face doesn’t know that some photos of her have surfaced. Tamara and Gretchen see the pictures and already begin to laugh at her. With Gretchen saying if Vicki is blaming her surgery on Slade comments then Gretchen is going to kill her.

On the way to Heather’s, Vicki is feeling a little bit insecure and Tamara and Gretchen are still cackling about Vicki. The night is not going to end well.

Finally reaching their destination, Tamara and Gretchen spot the seating arrangements. They blow up about Gretchen sitting next to Vicki. Heather tries to tell them that it’ because Vicki broke up with Brooks but Tamara and Gretchen don’t believe it. They think Vicki is secretly dating Brooks and no one can tell them differently.

Vicki arrives to the dinner.  Tamara and Vicki are both awkwardly on opposite sides at the dinner. Both are waiting for the other to make the move.

On the promo for this season, everyone seems to still be fighting just with the inclusion of new cast member Lydia McLaughlin. But Tamara and Gretchen may have been right about Vicki and Brooks.