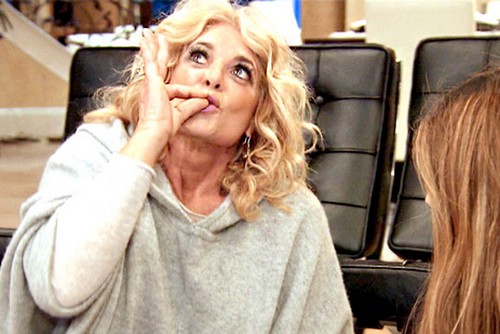 THE REAL HOUSEWIVES OF ORANGE COUNTY returns to Bravo tonight with a whole new episode called, “Hot in Orange County” On tonight’s episode Heather and Alexis work on their acting careers, while Gretchen and Slade ruffle some feathers.  Did you watch last week’s season premiere? We did and we recapped it here for you HERE!

On last week’s show Tamra doubted Vicki’s commitment to their new business venture when they faced off in a nasty argument that abruptly ended their Malibu wine-tasting trip. Alexis and Jim celebrated the grand opening of their trampoline park. Meanwhile, Tamra worried that Eddie was more committed to his bike-riding habit than her, and Heather and Terry hit a roadblock in their relationship when it’s revealed he went too far in an argument, uttering a word that hits too close for comfort to some of the other Housewives.

On tonight’s show while Heather is in Hollywood filming a guest role on Hot In Cleveland, Terry struggles at home alone with the kids. Meanwhile, Alexis pursues her own acting career in Orange County. Gretchen and Slade ruffle some feathers when they are inconsiderate on Heather’s big day. Then, Lydia confronts her mother about her marijuana smoking habit.

It’s Terry turn to take of the kids. It’s Heather first day of work. She and Terry are still stalling the “talk” and going about everyday as if it was normal.

Tamra is looking at rings for her and Eddie nuptials. She has help from former housewife Lauri. Tamra feels if she picks out the rings it will finally get the ball rolling with the wedding plans. Lauri is about to become a grandmother through her son, Josh. Everything seems to be going well for her. Then they begin to talk about Vicki.

They begin to talk about how Vicki likes to dish out advice but not take it. They each feel Vicki tried to sabotage their relationships. Lauri feels Vicki tries to make everyone unhappy as she is.

Lydia is hanging out with her mom. They’re going over family photos and Lydia asks her mother if she really given up pot. Her mom admits she still takes a puff every now and then. Lydia is disappointed and wants her mom to stop cold turkey but her mom doesn’t want to. So Lydia feels her mom is choosing drugs over her.

Heather shows up for her table read. She’s meeting all the big wigs and excited. Betty White helps settle her nerves. Overall it was good experience.

Alexis shows up for her acting sessions. She goes with the idea thinking the sessions should help her be a different person but finds that’s only an illusion. She has to keep her identity and incorporate the character. Which of course throws her.

Terry shows up for childcare. It isn’t as easy as he thought. Something Heather realizes when she calls. So she thinks it would be interesting to stop and get her nail done before heading home.

Day Two is much better and Heather is appreciating Terry’s help.

Gretchen and Slade are their San Diego vacation when a new car drives up. Slade tells her it’s her new car. A rolls Royce for her birthday. Gretchen wonders if they’re rich all of a sudden. Before she can be pleased she remembers her financial adviser is about to make a payment on her old car.

Everyone is getting ready to go and support Heather. Lydia and Tamra are in the car when Lydia mentions her mom’s drug history. It’s a way for Lydia to no longer be embarrassed about it. It also helps that Tamra isn’t being judgmental.
Alexis show up for Actor’s Workshop. She has some fun in the acting class. Her teacher keeps it interesting without any harsh criticism.

Everyone shows up for “Hot in Cleveland” tapings except for Gretchen and Slade. Heather notices the empty seats. The couple do eventually show up but then have technical difficulties with Slade’s cell. Terry and Tamra aren’t happy with the couple however they want to keep the happy atmosphere going.

They all go out to dinner later. At the table Gretchen mentions her new car. Tamra is stumped and Vicki thinks Gretchen is still dumb.

Lydia opens up the table to Tamra and Vicki to reconcile. They decide they need to talk about certain things later although for now; they’re good. Gretchen says she doesn’t need to worry unless her own relationship with Tamra changes but it doesn’t stop her from giving the once BFFs side glances and making snide remarks about their truce.

Terry makes a toast for Heather. It’s sweet and special. Heather knows her relationship still need work but its heading in the right direction.

In next week’s promo, Tamra opens up to her mom. She also reveals her attempted suicide at 21. Meanwhile Vicki attempts yet again to reclaim a relationship with Brooks.