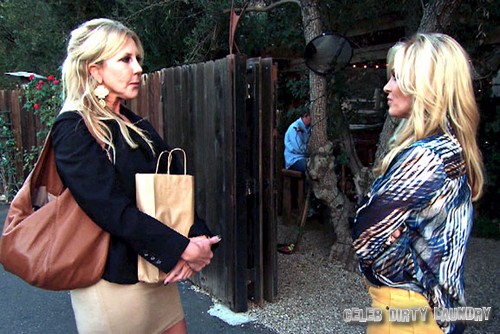 THE REAL HOUSEWIVES OF ORANGE COUNTY returns to Bravo tonight with a whole new episode called, “Whines by Wives” On tonight’s episode Tamra doubts Vicki’s commitment to their new business venture when they face off in a nasty argument that abruptly ends their Malibu wine-tasting trip. Did you watch last week’s season premiere? We did and we recapped it here for you HERE!

On last week’s show after the battle at Tamra’s party, Alexis struggled to turn the other cheek despite her Christian belief in forgiveness. Tamra’s newly-repaired relationship with Vicki goes sour when Vicki is a no-show at their new wine business. Meanwhile, Lydia celebrates her free-spirited mom’s new sobriety from marijuana. Vicki does her best to navigate a bitter rift between her family and her boyfriend, Brooks, and Gretchen breaks down in tears contemplating her complicated future with Slade. Heather receives an exciting offer to guest star on a sitcom, only to have Terry selfishly ruin the moment.

On tonight’s show Tamra doubts Vicki’s commitment to their new business venture when they face off in a nasty argument that abruptly ends their Malibu wine-tasting trip. Alexis and Jim celebrate the grand opening of their trampoline park. Meanwhile, Tamra worries that Eddie is more committed to his bike-riding habit than her, and Heather and Terry hit a roadblock in their relationship when it’s revealed he went too far in an argument, uttering a word that hits too close for comfort to some of the other Housewives.

Terry and Heather seemed to be still in some sort of argument. Heather is still upset over what happened at dinner. She didn’t want her husband to not make a joke for once. She tells him she wanted his support. He claims he gives her support but he doesn’t stop clipping toe nails. She accidentally listed the same thing twice when she was going over what she does for the family and he called her on it. Heather, feeling like Terry is missing the point, walks off. He attempts to follow but she shuts that down.

Tamra is getting ready for the wine business. They’re going to Malibu. Eddie brought his bicycle. Tamra wonders why he couldn’t just leave it at home. Eddie claims it recharges. Tamra makes the point that he rides the bike more than he does her.

Heather is keeping her husband in the dog house but that doesn’t stop them and the rest of the girls from going to Malibu. Vicki is the only one going solo in what turned out to be a couples’ trip.

Gretchen and Lydia do get a bond a little. Lydia’s son had made a “Get Well Soon” for Slade’s son.

They’re doing a wine tasting. Tamra is more drinking rather than tasting. The only one who knows about wine tasting is Heather. The wine owner is making a toast when he mentions the young woman next to him is his daughter. Vicki throws in she thought the woman was his wife and that he robbed the cradle. Awkward! It’s the only word that can describe the looks on everyone’s face. Vicki continues in blundering by going on that she didn’t know and she was getting a vibe.

Alexis and her husband are opening their trampoline park. She mentions how the girls are in Malibu. She claims she didn’t want to go but continues to bring it up. When she does make it to her new place, the grand opening is off to a good start.

Vicki gets emotional that she’s by herself. She begins to get teary eyed but doesn’t share with anyone else.

Everyone is at dinner. Lydia and her husband are congratulating and thankful when the conversations in turned to Alexis. Lydia mentions how Alexis misses Gretchen. Gretchen doesn’t believe and before the dinner gets tense the topics is changed towards Heather. That topic starts off light until Terry makes a joke.

The topics at the table are jumping back and forth when Vicki is congratulated on Vicki’s Vodka. Vicki tells everyone how she worked out a deal for her new company with casinos when Tamra asks if wines can incorporate into that deal. Tamra didn’t know about the Vodka start up until after it became public. It’s one of the reasons she’s mad with Vicki. How could Vicki under perform with their company then goes out to start a new one? Gretchen agrees with her.

The nest day at breakfast, Slade and Eddie aren’t there. They’re out riding bicycles. Heather and Terry bring up their fight. Terry tells everyone that he brought up “Divorce”. The girls are upset for Heather and try to caution the couple into not doing anything hasty. Heather gets teary eyed and says she’ll try to forgive him. The guys on bike arrive in time. The breakfast disperses to freshen up for later.

Tamra reveals the real reason she’s made about all the bicycling. She doesn’t understand how Eddie could be so committed to that but not to a wedding.

They’re wine tasting again and Vicki acts prickly. Because Tamra is drinking the wine, Vicki thinks to try on some clothes. The wine tasting comes to a quick end when Vicki tells Tamra she has dinner plans. Lydia tries to mediate before giving up and letting them argue it out. Vicki wants to leave and Tamra wants her to stay and be committed to their joint venture. Vicki is still going when Tamra calls her a bitch. If there was any chance of friendship it ended today.

Tamra is inside and she’s over Vicki.

Heather wants the two women to have a sit down. She’s sad that things had ended this way. Later she talks to her husband about what happened earlier. Heather feels embarrassed Terry had discussed “Divorce” with everyone. They want to work on their marriage so they apologize to each other.

Briana brings her baby to her Mom’s office. She needs adult conversation and Vicki supplies her with stories about Malibu. A Vicki version of events are a bit exaggerated but overall has the main point that the friendship is over.

Tamra is back from Malibu. She and Eddie are out to dinner. Tamra is having a tough time juggling both of her businesses. She’s mad that Vicki wasn’t helpful during the whole Malibu trip. She’s also mad at herself for losing her temper all the time. She admits she doesn’t know how to talk about emotions. She did it with Alexis and then with Vicki. It began when she was little. That was her home life. She feels that’s why she and Eddie do so well. Neither of them discusses their past.
She realizes there was an easier way to deal with Vicki and she feels bad about being constantly on the defense.

In next week’s promo, Heather is working meanwhile her husband is trying to handle the kids. Also Alexis has caught the acting bug. Is she really interested or is she just copying?