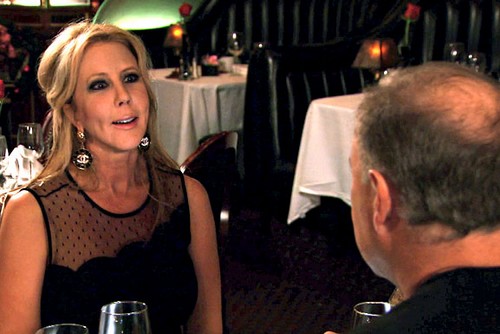 THE REAL HOUSEWIVES OF ORANGE COUNTY returns to Bravo tonight with a whole new episode called, “A Star Is Reborn?” On tonight’s episode Tamra and Vicki’s rebuilt friendship begins to crumble, while Heather gets an offer Terry is less-than-pleased with. Did you watch last week’s season premiere? We did and we recapped it here for you HERE!

On last week’s show when Tamra exploded and kicked Alexis out of her party, all hell broke loose. While Heather and Gretchen were happy to see Alexis go, Vicki was torn between her alliance with Alexis and her renewed friendship with former BFF Tamra. Alexis screamed that she was being bullied again, but Lydia disagrees. In the aftermath, Gretchen headed to New York to support Slade as he dealt with the hardest challenge he’s ever faced. Lydia encouraged a reluctant Alexis to reach out to her enemies and make amends, while Vicki’s son-in-law dropped a bomb about her boyfriend Brooks.

On tonight’s show after the battle at Tamra’s party, Alexis struggles to turn the other cheek despite her Christian belief in forgiveness. Tamra’s newly-repaired relationship with Vicki goes sour when Vicki is a no-show at their new wine business. Meanwhile, Lydia celebrates her free-spirited mom’s new sobriety from marijuana. Vicki does her best to navigate a bitter rift between her family and her boyfriend, Brooks, and Gretchen breaks down in tears contemplating her complicated future with Slade. Heather receives an exciting offer to guest star on a sitcom, only to have Terry selfishly ruin the moment.

Heather is having lunch with the girls. She and Tamra have decided to induct Lydia into their clique. At the lunch, Lydia is talking about her out there mom. Her mom has been known to sprinkle people with fairly dust/glitter. It doesn’t take Tamra long to ask Lydia about Alexis. Heather and Tamra try to justify themselves while bringing Lydia in. Lydia actually agree with some of their points but she’s also clear that Alexis has never done anything to her.

Alexis is with her husband and talking about Vicki. She supports the Brooks relationship and doesn’t want people to pressure Vicki. Her husband then questions why she even went to Tamra’s dinner. Her husband tells her not to go around those women anymore.

Vicki and her son-in-law are working together to pit in baby seat in her car. After they finish, Vicki thinks now is the time to have a conversation. She brings in the topic of Brooks. She asks him to respect her and her decisions. She tells him she wants that choice. He fires back that they’ll move out if she brings him around.

Lydia is out shopping with her eccentric mom. Her mother sprinkles a sales assistant with fairy dust. Her mom has always been eccentric. Lydia acknowledges that her mom is a habitual drug user. Although it may be a family trait. Her mom is the one paying.

Gretchen is at home when Slade returns. She asks about his job. She wondered if they were understanding to Slade’s situation. His son isn’t out of the woods yet so he’ll still have to be bi-coastal. Slade then brings why Gretchen hasn’t brought up kids. Gretchen felt it was inappropriate to bring up having kids after watching Slade breakdown over his son.

Heather and Tamra are out enjoying themselves when Heather’s agent calls in with a offer. She’s so happy to get the part that she immediately calls her husband who congratulates her.

Vicki is meeting Brooks for dinner. She asks him about the status of their relationship. She wants him back but needs a clarification on what they are now. She finds out he’s seeing other people. He’s tells her she’s single because he wants a woman to be able to bring him into her life. When her daughter moved in, she made her choice. Vicki breaks down in tears. She loves her children and she love Brooks. But he won’t make decisions for her.

Lydia is hanging out again with her mom. Their out to lunch. It’s a celebration for her mom quitting weed. Lydia is proud because now her mom can babysit. Growing up both of her parents were potheads and she thinks that’s why she turned to God.

Tamra is opening the office for the Wines by Wives. It was originally a joint venture with Vicki. However Vicki hasn’t shown up. Tamra wants to dismiss her but their third partner won’t let her forget that Vicki is a part of the company.

Heather and her family are out to dinner. Heather tells her husband that the nest few weeks will be hectic. Her husband wants to discuss the specifics. Her husband and his little jokes makes her angry. She feels like he ruined her moment. She then tries to ignore for the rest of the night. Her husband wants to restart the night and even apologizes. Yet nothing can fix the moment.

In next week’s promo, Tamra is sampling the wines and decides to make it a girls trip. So of course things blow up because when hasn’t it? Tamra and Vicki argue. Heather’s husband mentions divorce.