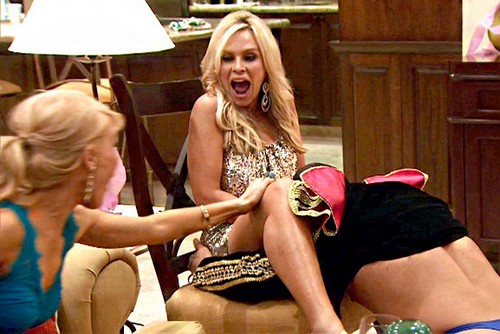 THE REAL HOUSEWIVES OF ORANGE COUNTY continues on Bravo tonight with a whole new episode called, “Dirty Dancing in Mexico.” On tonight’s episode Tamra’s bachelorette party continues, with Vicki and Gretchen facing off and strippers!  Did you watch last week’s episode? We did and we recapped it here for you HERE!

On last week’s show Tamra and Alexis faced each other for the first time since the debacle at Tamra’s party. Meanwhile, Heather and Gretchen butted heads while planning Tamra’s bachelorette party trip to Mexico. Then, just as the ladies headed south of the border, O.C. housewife Lauri Peterson told Gretchen shocking allegations about Vicki’s past.

On tonight’s show in part two of Tamra’s Mexican bachelorette extravaganza, Vicki steals Tamra and Lydia away for a night of drunken debauchery, leaving Gretchen and Heather furious. It’s all poolside drama when Gretchen and Vicki finally have it out, but Tamra makes a bigger splash when she reveals details of her past to Gretchen. The trip goes from crazy to nuts when Mexican strippers show up, but can Lydia’s virgin eyes handle such indelicacy without sending her running for the exit? Back in Orange County, Alexis begs Jim for a gift he’s just not willing to give.

Vicki, Lydia, and Tamra are out enjoying Mexican nightlife meanwhile Gretchen and Heather, who were left at the restaurant, are in the limo venting. That’s when Gretchen decides to reveal all of what Laurie had told her about Vicki. Heather doesn’t want to hear any of the gossips and she just want to return to the hotel. She’s even more corcerned about the rest of the girls that she is angry.

Tamra is finally enjoying her bachelorette weekend. She did boob shots and danced on a taxi. It wasn’t Tamra to ditch people but she’s too drunk to care. Once they returned to the hotel the party trio decide to talk to Heather first. Heather is hurt but Gretchen is mad!

Tamra, Vicki, and Lydia are too drunk to apologize without laughing. In Tamra’s room the girls try to get serious but it’s not working. Vicki manages to pee on Tamra’s bed before leaving.

Gretchen is willing not to destroy the weekend and continue with her and Heather’s plans. But while in the car Vicki points out where they bought the light up ears last night. Lydia checks in and Heather and Gretchen assure everyone that today is a new day.

Tension is rising in the car nevertheless. Lydia tries to keep things calm but Gretchen is crying because she’s hurt. Things almost got back on the good note until Vicki pushes the “BFF” button. So Tamra has no choice but to have two women confront the issue. Vicki talk over each other until Gretchen storms off.

Vicki had called Gretchen the “perfect” princess. Lydia and Heather believe Vicki trie to compete for Tamra with Gretchen. Tamra and Gretchen believes Vicki sees this as an competiton. Especially last night when she told Tamra her plan worked. The only person who doesn’t believe Vicki is competing is Vicki.

Tamra takes this time to have a heart to heart with Gretchen. She opens up to her about her past suicide attempts. She makes it known that Vicki doesn’t even know about her past history. That’s why she had started a relationship with Vicki because Vicki wouldn’t ask too many questions. But Tamra has always people would leave her if they truly got to know her.

Alexis is out to dinner with her husband when she mentions Lydia had called in her panic. Lydia is freaking out over the male strippers and needed her friend’s advice. Alexis told her to do what’s comfortable. Advice she takes when her husband suggests another baby. Alexis doesn’t want another child and she makes that perfectly clear.
The bridal shower is back on the right foot. Everyone is drinking and Tamra is opening inapporiate sex gifts. Before things can escalate, Lydia excuse herself so she doesn’t have to see the strippers. She was right the strippers comes in immediately after she leaves. Mexican strippers don’t have the no touching rule. At the end of the night both Vicki and Tamra claiming they could get pregnant from this. Somwhere Tamra finds a pregnancy test and then tries to get several people to pee on it.

The morning after, Lydia returns to the table. The girls are happy and the trip was ok. However Tamra is worried if she tries to fully restart her relationship with Vicki then Gretchen will be mad. Will it come down to Tamra having to choose between the two???