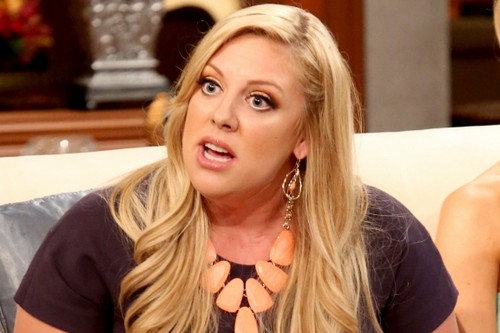 THE REAL HOUSEWIVES OF ORANGE COUNTY continues on Bravo tonight with a whole new episode called, “Reunion Part 3.” On tonight’s episode Brooks arrives at the reunion, leading him, Vicki, and Briana to a major, relationship-altering confrontation. Did you watch last week’s episode? We did and we recapped it here for you HERE!

On last week’s show the drama-packed reunion continued as Gretchen faced off against the other ladies about Tamra’s wedding dress shopping and the accusation that Gretchen tried to force Alexis out of the festivities. Heather confronted Gretchen about what really happened behind-the-scenes with the ‘Malibu Country’ auditions, and Gretchen was left in tears when the other ladies make shocking accusations about her engagement to Slade.

On tonight’s show the electrifying reunion comes to a dramatic conclusion when Vicki’s boyfriend Brooks and Briana confront each other in an explosive argument that brings Vicki to tears and has her threatening to leave the reunion for good!

The reunion show concludes finally. It begins with Andy talking to Heather about selling her house. She basically explains that someone just wanted the house. A offer was made to her and that was that. Now she is in the process of building a new house. Then there is flashback to Heather and her acting career or rather her wanting an acting career but her not getting the support she needs from her husband.

After the flashback that shows Terry’s lack of support Andy asks her how it feels to see her marital woes on TV. Heather responds with they are a real couple and if they were portrayed like picking flowers all the time it would not be real. A questions is read asking why Heather is so hard on a her husband who gives her so much. She recalls that they give each other stuff and just because she is providing in the home and not financially does not mean she contributes less then Terry does to the marriage.

Andy then turns it to Jim and Alexis’ marriage where he looks bad. Alexis defends her husband saying he is quirky and funny but that stuff is on the cutting room floor. Tamra is then asked about her opinion of how Jim and Alexis’s marriage was portrayed this season and she says seemed staged. Alexis even says that it is not all happy go lucky in her marriage.

Tamra and Eddie are in the hot seat next. First there are flashback scenes from the season where Eddie wouldn’t set a wedding date, then Andy comments on how now she is married. A question is asked about their sex life and she says it is great. Then Andy makes a remark that Tamra took Eddie’s last name. Andy then gives viewers a sneak peek of Tamra’s new show Tamra’s OC Wedding. The one thing all the ladies can agree on is the wedding was amazing and that Eddie and Tamra are amazing together.

Vicky’s daughter Briana joins the group and Andy talks to her about motherhood. Everyone gushes at pictures of the baby. Vicky adds that she likes to wake up the baby when she gets home from work. Andy asks Briana if there is anything her mom does on the show that surprises her and she says no. After that little chit chat there is flashback to the past season of baby Troy’s birth and Ryan deploying to Afghanistan. It is very emotional and Andy asks Briana about Ryan, who she says is doing great. He should be home in October. Andy brings up the Lydia mom fairy dust incident at the Winter Wonderland party at Vicky’s house with Ryan. Lydia gets defensive about her mother and Briana quickly says she is not going to talk about her husband because he is in Afghanistan. Lydia won’t let it go and the two start to fight but Briana shuts it down. Briana does reveal that she and Ryan will move out once he is back. This of course brings up Brooks and Vicky’s relationship to which she says the two are now opening up to date other people. A question goes to Briana about being too hard on Brooks and not wanting to be around him. She simply says he has done stuff that makes him not trustworthy and she won’t have her family around him. Vicky puts a stop to the conversation by threatening to unmic and walk off the set if the discussion continues. She will not have it turn into a Brooks bashing moment. Briana leaves it with Brooks has done disrespectfully things to her and her mother. Vicky says she is taking a step back and to be alone, she and Brooks are not together and she admits that he is disrespectful to her.

Vicky begins to walk off stage but before she does Briana says they should bring Brooks out to defend himself. Vicky sits back down and Brooks comes out. Andy tells him Briana feels like Brooks is disrespectful to Vicky, He tries to apologize to Briana but she interrupts him, it is about an email he sent to Vicky asking her to leave Don. The two argue about whether or not that happened. Brooks apologies for being disrespectful to Vicky but Briana won’t let it go. She flips and confronts him about telling Ryan he should start hitting her to get her inline. Brooks denies the whole thing but she says it is on recording. He says it is not true and it was taken out of contest. During this time Vicky walks off the set but then comes back to defend Brooks saying he has never touched her. Briana does not believe that Brooks is sorry. The argument goes on and on as the girls all confront Vicky about her relationship with Brooks.

Andy asks Tamra to interject into the whole Brooks, Vicky, Briana thing and she recalls about she took Brooks to lunch and relayed how she would hurt him if he ever did anything to Vicky. Tamra is livid to hear what Briana has said and Tamra then calls Vicky weak. Heather tells Vicky that maybe it is time to move on. Vicky explains she is hurt but cares about Brooks deeply and she knows he has remorse for what he said. Briana says Vicky is her best friend but she can’t stand for her to be with someone like Brooks. Vicky breaks down in tears as Andy reminds her she is surrounded by love and support. It gets worse when Tamra recalls how Briana has shown her texts from Brooks to Vicky tearing her down both Vicky and Brooks say that is a lie despite Briana’s deep protest that it is the truth. Brooks would like to work things out with Briana and Ryan. Before Briana leaves she says she loves her mom and wants her to be in a relationship that brings the family together not tear it apart. Brooks says he loves Vicky enough to let her go and that she should listen to those that have known her longer. Vicky talks to Gretchen about how she and Slade stood by each other and made it through. She compares her relationship with Brooks to them. Gretchen just says you have to believe in your heart that he is not that person.

The Vicky and Brooks relationship bashing goes on for awhile with Vicky being wishy washy about ending the relationship. Briana attacking Brooks and finally in the end Brooks says he will let Vicky go for the sake of her family. Brooks kisses Vicky tells her he will see her and good luck, then leaves the set. Vicky breaks down in Alexis’ arms. All the women gather around to comfort her and give her huge encouragement for the person she is.

Finally the Brooks/Vicky show is over and the reunion begins to wind down. It was an epic reunion. Andy gets some final thoughts from all the ladies beginning with Lydia who says she was punched in the head in a good way. Alexis says she feels bad for a lot of people and friendships have changed again. Heather says it was difficult yet fun and exciting. Tamra says overall it was her best year because she learned a lot about herself and she got married. She also says she loves all the ladies. Gretchen says she was hurt by some of the friendships and being accused of things hurt her but she is thrilled that she is engaged. Last is Vicky who is emotionally drained and it looks like she and Brooks are over. She is a hopeless romantic and loves her family more than anything. She also makes it clear she was not in an abusive relationship with Brooks but she does hope to find love again. The crew gives a toast to the OC and that is the end.