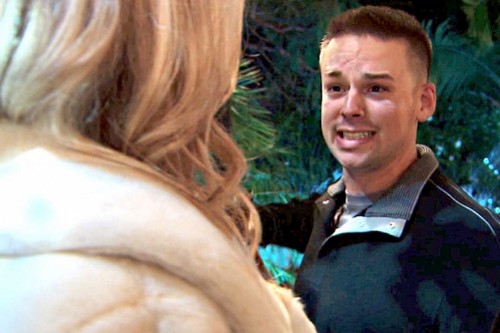 THE REAL HOUSEWIVES OF ORANGE COUNTY continues on Bravo tonight with a whole new episode called, “Cold Shoulders.”  On tonight’s episode drama erupts at Vicki’s Winter Wonderland party as nearly every guest gets into a tiff, even Briana’s husband.. Did you watch last week’s episode?  We did and we recapped it here for you HERE!

On last week’s show Gretchen proposed to Slade during a stunning skyscraper rooftop rendezvous, but none of the other ladies scored an invite to the engagement party that follows. Heather and Terry broke the news to their kids that they sold their home. Vicki heard Slade insult her on his radio show and planned to confront him at her upcoming “Winter Wonderland” party. As the party began, the ladies were full of surprises: Tamra revealed her wedding date, Vicki revealed her rekindled relationship with Brooks, and everybody revealed their true feelings about Gretchen.

On tonight’s show as Vicki’s “Winter Wonderland” party continues, Gretchen and Heather get into a heated argument, and Alexis is brought to tears when hubby Jim faces the other ladies for the first time all year. Briana’s husband, Ryan, shocks everyone when he verbally attacks a particular guest. Still reeling from their falling out in Canada, Tamra and Gretchen accuse one another of lies and deceptions. Steaming from Slade’s public insults, Vicki and Lydia ambush him in a surprise turn at an already frigid party.

Gretchen and Slade arrive to the party and instantly sense the mood of the party. So she should. Everyone was just talking about her before they arrived. What makes things even more awkward is when they run into Vicki’s son-in-law. He’s on a non-stop apparent rant against Brooks. Surprisingly Gretchen even defends Vicki. Saying she needs to make her own decisions.

The Brooks Problem pops up a lot at the party. Tamra expresses her concern with Alexis and the two agree they are worried but Alexis’ husband did tell them Vicki has to learn things on her own.

Gretchen then starts to talk to Heather. The two argue over who should apologize until no one is happy with the situation. The destruction of this friendship however is the the big blow up of the night.

The fight is between Lydia’s mother and Ryan. Ryan saw the older lady with her feet on the couch and immediately goes at her. Of course his temper gets the best of him and he just begins cursing and yelling at her. Ryan doesn’t see anything wrong with yelling and berating at a 64 year old.

Lydia and her family are leaving when Vicki does her best to stop them. While inside Vicki’s brother is telling Ryan to calm down because they can’t take any more of his tantrums.

Vicki gets Lydia and co to return but everyone tells her she needs to talk to Ryan. He can’t be running Vicki’s house. She goes to speak to him and he continues to claim the the woman cursed at him. He storms off and leaves Vicki and Brianna alone. Brianna keeps defending her husband so Vicki changes the subject. She brings up Brooks and this time she’s not talking theoretically. She tells Brianna she’s getting back together with Brooks and Brianna is saying she’ll move out.

The same threat she always uses because she knows Vicki would want to be around her grandson. Will it work again?

The party continues but this is the finale. The drama hasn’t officially ended quite yet. Things go back to Gretchen nonexistent television role. Tamra is ready to let it go but Gretchen is still hung up on what Tamra did.

Gretchen and Slade are for even more though. Vicki started off telling Slade very calmly that he hurt her with his comments on her looks but inspired her bacon vodka. Gretchen gets riled up because Vicki used to call Slade names and that Vicki is being a hypocrite. In the middle of the ensuing yelling match, Vicki does admit she called Slade things but she stopped a couple of years ago and he continues to this day to make snide remarks on her looks. While Gretchen and Vicki go at it, Lydia goes at Slade for things he said about her.

Lydia is mad that Slade only ever apologized after Lydia confronted him so she doesn’t trust anything he says. Many of the other women come to the ladies defense and try to tell him to lay off of women. He says certain women don’t qualify.

Vicki has goes through several make-ups and break-ups with Brooks and her daughter is moving into her own apartment. And the rest of the women are let’s admit it still breaking up and making up with each other. Let’s see where they’re at next week on the reunion show.