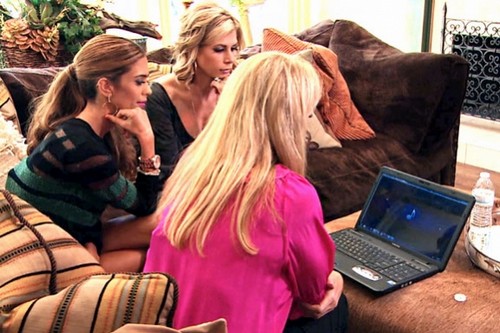 THE REAL HOUSEWIVES OF ORANGE COUNTY continues on Bravo tonight with a whole new episode called, “An Immodest Proposal.” On tonight’s episode Gretchen proposes to Slade, but the couple gets an icy reception at Vicki’s Winter Wonderland party. Did you watch last week’s episode? We did and we recapped it here for you HERE!

On last week’s show though she made amends with the other ladies, Alexis’ luck ran out when she came face-to-face with Gretchen. Still recovering from the drama in Whistler, Lydia grounded herself in Bible study, and Heather and Terry received a surprise offer they might not be able to refuse. Meanwhile Vicki struggled to keep things professional on a business trip with Brooks. Tamra confronted Eddie about setting a wedding date, while Gretchen took matters into her own hands and plotted a surprise marriage proposal for Slade.

On tonight’s show Gretchen proposes to Slade during a stunning skyscraper rooftop rendezvous, but none of the other ladies score an invite to the engagement party that follows. Heather and Terry break the news to their kids that they’ve sold their home. Vicki hears Slade insult her on his radio show and plans to confront him at her upcoming “Winter Wonderland” party. As the party begins, the ladies are full of surprises: Tamra reveals her wedding date, Vicki reveals her rekindled relationship with Brooks, and everybody reveals their true feelings about Gretchen.

Vicki’s home renovation is just about finish. She managed to erase all traces of her now ex-husband, Don. So she’s excited and wants to celebrate with a party. Lydia and Alexis are over at her house to help out with her plans when Vicki picks the perfect time to find out what Slade has been saying about her. The girls listen in on an recording from his radio show. It’s the ones he did so soon after Vicki’s surgery.
He basically insults her without ever using her name. Vicki is mad and the girls are mad for her. However Vicki says she’s taking the higher ground(we’ll see) and inviting Slade anyway to her get together.

Meanwhile Slade is being set up by Gretchen for her epic marriage proposal. It starts off with his co-host playing Gretchen’s song followed by helicopter ride to take him to a rooftop where Gretchen, all decked out, will be waiting for him. After he accepts her proposal she has a romantic dinner laid out on the top floor.

She’s invited close family and friends that will support her and Slade. What she really means is none of the other housewives will be there. However Gretchen is getting nervous. She says it’s because of what she went through with Jack. She gets some helpful conversation with her mom and that settles her.

Once he gets there she apologizes for doubting last year and proposes. He of course said yes.

Tamra is currently preparing to open her gym. She probably doesn’t even know about Gretchen’s big announcement. Surprisingly the first person to come out and support Tamra’s newest venture is Alexis.

Tonight is Vicki’s Winter Wonderland. She doesn’t want dram and yet she knows drama follows her. Also her son-in-law is home for the weekend. Poor guy, wrong weekend!

That doesn’t stop everyone saying they don’t want drama and heading to Vicki’s party with nothing but drama.

Heather is still mad With Gretchen.

Gretchen is mad with pretty much everyone.

Lydia is mad with Slade.

Alexis and her husband are quiet for now.

Another thing everyone can agree on is that they love the decorations. If only that’s all they could do. Look at the decorations. Before long they realize Gretchen isn’t there and wonders who has talk to her. The closest they got was Alexis who had an argument with her several days ago. This starts a near frenzy in which many expressed their disappointment with Gretchen. They only stop once as Gretchen arrives with her secret fiancée with her.