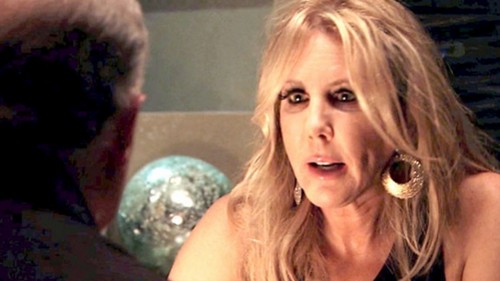 THE REAL HOUSEWIVES OF ORANGE COUNTY continues on Bravo tonight with a whole new episode called, “Crossroads.” On tonight’s episode Vicki goes away with Brooks, while Gretchen refuses to make up with Alexis, instead focusing on proposing to Slade.  Did you watch last week’s episode? We did and we recapped it here for you HERE!

On last week’s show in part two of the ladies’ Canada trip, Lauri’s accusations of indiscretions left Vicki’s head spinning and launched the mother of all dinner table debacles. Tamra accused Gretchen of lying, making Gretchen question their friendship. A snowmobile adventure took a surprising turn, and a subzero vodka binge left Tamra tongue-tied in the worst way possible. Back in Orange County, Heather guest starred on a new sitcom.

On tonight’s show though she’s made amends with the other ladies, Alexis’ luck runs out when she comes face-to-face with Gretchen. Still recovering from the drama in Whistler, Lydia grounds herself in Bible study, and Heather and Terry receive a surprise offer they might not be able to refuse. Meanwhile Vicki struggles to keep things professional on a business trip with Brooks. Tamra confronts Eddie about setting a wedding date, while Gretchen takes matters into her own hands and plots a surprise marriage proposal for Slade.

They’re back from Canada and the drama followed them home. Gretchen is feeling hurt stil that Heather made everyone believe she was lying about the tv role on Malibu Country. She’s still hurt because according to her Heather sent her condescending text that she believes was trying to demean the role she was offered.

Heather on the other hand isn’t thinking about her at all. She and her husband just sold their house and are planning on building another. Even though they built the house they have now from scratch they weren’t thinking about a fourth child. Heather is actually excited about a new house. She sees it as an adventure.

Tamra and Eddie are out to dinner when Tamra tries to get some wedding plans done. Eddie has been dragging his feet with the whole wedding and says that’s not what they need to focus on right now but Tamra remains persistent and pins down a date. All Eddie has to do now is show up.

Vicki is going on business meeting to Napa Valley for her company Vicki’s Vodka. Her daughter Brianna gets worried though after hearing that Brooks will be working with Vicki. Vicki still feels that once Brianna got to know Brooks she’d change her mind. But that won’t stop Vicki from interrogating Brooks the moment they’re alone. She needs to find out if what Lauri was saying was true.

Alexis and Gretchen decide to meet each other and hopefully clear the air. Yet despite these good intentions they both feel the other is still in the wrong and these once BFFs are over.

Lydia is having a bible group. It’s a way to make everyone feel a little bit better but as everyone is mentioning important things they’ve done Lydia can’t help realize she’s doing less. However she’s able to see the bright side and that’s what she wanted to do in the group. Spending time with the other girls can test her limits but this helps grounds her.

Vicki’s Napa visit is going well. She created a Piggy Vodka and all contributions will not be going to Slade. The trip could even have been perfect if Vicki and Brooks were together again or so she thinks.

Alexis has an audition and this time she knows Heather and Gretchen weren’t offer the role first. She’s doing acting classes as well but this time she doesn’t want her career to interfere with her family. She’s been through that already and so has her marriage.

Gretchen is proposing to Slade and she’s doing anything small. She’s planning on an original song. She knows she’s not the best singer but she believes content over quality is what’s going to matter to Slade. He did say he loved her singing voice.

Vicki brings up Lauri’s accusations and immediately Brooks denies all of it. So she thinks it’s the best time to invite Brooks over for a sleepover. Her daughter is out of the right now and she’s by herself. Surprisingly, Brooks shoots down the reconciliation. He claims he doesn’t want to wait around for Vicki to stand up to her grown daughter. Vicki keeps saying he’s confused but he sounds pretty clear when he says he’s not waiting for her.

Vicki thinks she needs to talk to Brianna but she should hear Brooks as he throw making money together right in the middle of his speech. Was Brianna correct about his intentions all along?