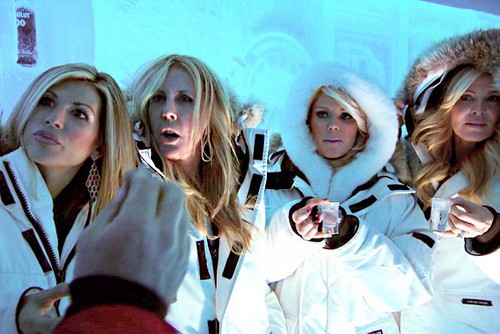 THE REAL HOUSEWIVES OF ORANGE COUNTY continues on Bravo tonight with a whole new episode called, “Hold Your Tongue.”  On tonight’s episode Vicki and Lauri continue to butt heads in Whistler, while Heather heads to the O.C. for her TV role. Did you watch last week’s episode? We did and we recapped it here for you HERE!

On last week’s show Lydia looked forward to taking all the ladies on a ski vacation to Whistler, Canada. Alexis hoped for a conflict-free trip, but before the women even reach the snow, Heather and Gretchen tussled over who was really offered a coveted sitcom role. Meanwhile, Tamra heard the raunchy gossip that Lauri had been spreading about Vicki and sets off an avalanche of screams when she spilled the beans to Vicki.

On tonight’s show in part two of the ladies’ Canada trip, Lauri’s accusations of indiscretions leaves Vicki’s head spinning and launches the mother of all dinner table debacles. Tamra accuses Gretchen of lying, making Gretchen question their friendship. A snowmobile adventure takes a surprising turn, and a subzero vodka binge leaves Tamra tongue-tied in the worst way possible. Back in Orange County, Heather guest stars on a new sitcom.

And the drama continues. Vicki is still angry about Lauri’s rumors but she’s angrier at herself for losing control. Tamra is listening but she doesn’t believe is over just yet. How can it be when Vicki doesn’t know why Lauri started to say these things.

Over at Lydia’s suite everyone else is meeting up for the dinner where Lauri does reveal her grievances with Vicki. Vicki had forwarded a defamatory text against Lauri’s husband and the same text eventually went viral. The whole little chat with Gretchen was vengeful. The other ladies join them for dinner. It’s peaceful at first with Vicki doing her best to ignore Lauri but these things never stay sane for long.

Vicki and Lauri go at it again. Things are blowing up and that’s when Gretchen decides to air her problems with Vicki. Vicki is getting confused with who said what but she’s standing firm that these things should be table for another day and not tonight at diner. However before she leaves she does learn Lauri’s problem with her. An incident that happened that happened seven years ago. That along with Gretchen’s problem from five years ago makes her snap. She can’t understand why these women won’t let these go when it’s been years.

When it’s just Tamra and Gretchen at the table, Gretchen is upset that Tamra didn’t stick up for her with Vicki. Well, Tamra has her own problems with Gretchen. She didn’t like that Gretchen tried to play with her fake TV role. Gretchen is still holding to her story but now is upset how every time Tamra is friendly with Vicki, they’re friendship suffers. Tamra tells Gretchen she believes her yet deep down she still trust Heather’s version.

The next day after an impromptu snowball fight the tension is finally released. Gretchen and Vicki are laughing and joking around. She’s nice even to Lauri. Still this is a trip for a contentious group of women. Can the drama really be over so soon?
The ladies have another dinner. This time there’s a vodka ice room at the restaurant. They go there and after a shot of vodka Vicki suggests they put their tongue on the wall. Tamra is the only one that does. She gets stuck and after the server helps her off with warm water, her tongue is bleeding.

Tamra chooses to get a doctor’s opinion so she calls Terri and Heather. They need time to laugh but he assures her she’ll be fine. If nothing else at least it provided some entertainment.