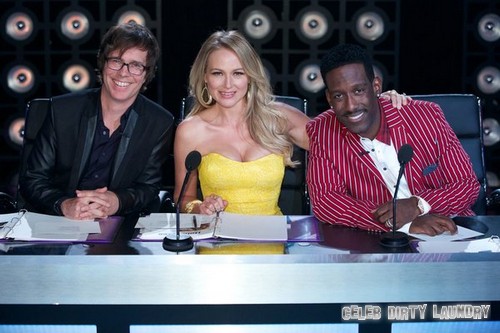 On Monday THE SING-OFF premiered on NBC with its 4th season and the it showcased the country’s top a cappella groups performing popular songs in ways that viewers have never heard them before.  This season Jewel will joined the judges table alongside Ben Folds (Ben Folds Five) and Shawn Stockman (Boyz II Men), who both returned.  If you missed the premiere episode, we have a full and detailed recap, right here for you.

On last night’s show the groups tried to make a killer first impression on the judges. The groups pulled out the best songs from their music libraries to win over the crowd and stay in the competition.  My favorite group from the night were Street Corner Renaissance.  They sang a rendition of One Direction‘s “What Makes You Beautiful” and it was amazing.  By the end of the show The Princeton Footnotes were sent home.

On tonight’ show the nine remaining groups pump up the jams with party anthems and hope to win the judges over with their playful and upbeat tunes.  Starring: Nick Lachey, Jewel, Shawn Stockman and Ben Folds.

Tonight’s episode of The Sing-Off opens with a medley of partying anthems performed by the remaining nine a cappella groups.

The first performance of the night will be young California group Vocal Rush. They will be singing “Gonna Make You Sweat” by C&C Music Factory. Jewel thinks Vocal Rush did great, sometimes she forgets they are still in high-school. She does think they were moving a little too slow though. Shawn thinks their 90’s dance moves are impressive, considering they weren’t even born when the song came out, he thinks they were a little rushed as well. Ben loves Vocal Rush’s personality and their heart, he thinks they have what it takes to sell records.

Next up is the Country a cappella group Home Free, tonight they will be singing “Life Is A Highway” by Rascal Flatts. Shawn thinks that Home Free is a perfect example of a cappella music. Ben thinks they did “nice work.” Jewel thinks Home Free are “her boys,” she thinks that they sell the idea of a country band effortlessly.

The next group to perform is Voice Play, they will be singing “Play That Funky Music” by Wild Cherry. Shawn loved Honey’s rapping, and Earl’s high note. Overall he thinks Voice Play “came back with a vengeance.” Ben thought their performance was really good, and a lot of fun. He thinks the “baseline was tight.” Jewel thinks that the performance was much more personal than their previous performances.

The next group to perform will be the all-female Element. Tonight they will be singing Pink’s song, “Raise Your Glass.” Jewel thinks she did a good job and she enjoyed it. Ben thinks they had a great baseline, but he didn’t think they really had focus, he does think their blend is getting better though. Shawn is amazed at how well they moved around in their heels. He thinks they should try to incorporate more individuality into their performances.

Calle Sol will be singing “Livin La Vida Loca” next, by Ricky Martin. Shawn thinks that sometimes their dancing can be a bit of a hindrance, and it makes it difficult for them to breathe and sing simultaneously. Also, it was supposed to be a party theme tonight, and the beginning started out as a ballad. Jewel thinks that their singing didn’t really do it for her, and she thought there were some holes in their performance. Ben thinks they need to “tighten up the music.”

The next group to perform is Ten, they are singing Nelly’s “Hot In Here.” Ben thinks their lead vocal was “grooving.” Jewel says their “breakdown was very cool,” and “any one of them could be stars.” She is looking forward to seeing them grow and progress. Shawn thinks Ten was “cohesive” and he thinks once they “tap into what they have, they are going to blow the roof off.”

The final a cappella group to perform will be the Filharmonics, singing “This Is How We Do It” by Montell Jordan. Jewel thinks they are “too fun to watch.” Shawn thinks that it was a party form the first note they sang, he does think that they need to work on staying on key. Overall he thinks they did a great job. Ben thinks they have a “great sound” and it “sounded like a record.”

It is time for the ultimate sing-off, the judges have decided that the two a cappella groups up for elimination tonight are Calle Sol and the Acoustikats. They will both be singing Kelly Clarkson’s “Stronger.”

Jewel, Shawn, and Ben have made a decision. Acoustikats are safe. The second team to be eliminated on The Sing-Off is Calle Sol.