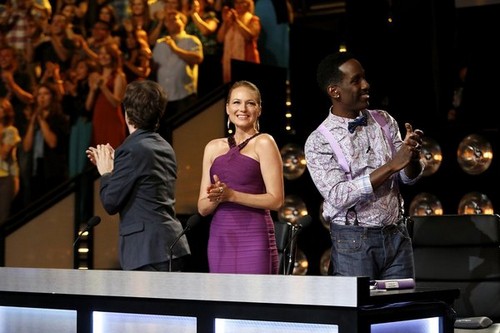 THE SING-OFF premiered on NBC with its 4th season this week and it showcased the country’s top cappella groups performing popular songs in ways that viewers have never heard them before.  This season Jewel will joined the judges table alongside Ben Folds (Ben Folds Five) and Shawn Stockman (Boyz II Men), who both returned. If you missed episode 3, we have a full and detailed recap, right here for you.

On last week’s show the eight remaining groups searched the charts for their favorite #1 hit to win over the judge’s approval.  At the end of the show last week Street Corner Renaissance were eliminated from The Sing-Off!

On tonight’s show the seven groups take us back in time and relive the hits of the past. They hope to capture the judges attention with songs that can please all generations.Starring: Nick Lachey, Jewel, Shawn Stockman and Ben Folds.

The Sing-Off kicks off tonight with a group performance from the remaining seven groups. Tonight Home Free, Voice Play, Element, and Vocal Rush will be performing songs that span the decades, iconic hits. Judge Ben Folds has been spending some time with the groups performing tonight, and helping them work on their songs for the night.

The first cappella group to perform on The Sing-Off tonight is Home Free, they will be singing the Johnny Cash classic “Ring of Fire.” They receive a standing ovation from all three of the judges, and the audience. Ben is happy they took his advice and “stayed true to themselves,” he thinks their performance was awesome. Jewel thinks they just created “cappella country reggae,” and she thinks they have “sick range. Shawn loved the reggae beat they used in the song, and he thinks Austin’s voice is as “smooth as butter.” Shawn thinks Home Free is “truly entertaining.”

The next group up is Voice Play, they will be singing the 90’s classic “Don’t Speak” by No Doubt. Shawn says their performance was “amazing,” and they showed a different side of themselves they have never shown before. Ben thinks they “kicked the song’s ass” and they used all of their dynamics to say something. Overall he thinks their performance was “fantastic.” Jewel thinks that they have finally “showed their hearts.”

Element will be performing next on tonight’s episode of The Sing-Off. They will be singing The Supreme’s hit song, “You Keep Me Hanging On.” Ben thinks there was some “tuning issues” in their performance, but overall they are taking a step in the right direction. Jewel thinks they “sound beautiful and they look beautiful.” Shawn thinks they “look lovely,” but he thought that their harmonies “came unglued.”

Vocal Rush is up next, singing the 80’s hit “Holding On For A Hero.” Ben thinks their “bass and drums really held it down this time,” he loves watching them sing. Shawn loves that they are young, and they have no fear, every time they perform they go for it. He does think it fell apart for a little bit during the double-chorus, but they pulled it back together. Jewel loves that they added some rap to it, she thinks that sometime they get a little bit excited and they get ahead of the tempo though.

It’s for the Ultimate Sing-Off. The judges have made a decision, Home Free and Voice Play are safe. Element and Vocal Rush must compete in the Sing-Off to see which cappella group is going home tonight. They will both be performing “Survivor” by Destiny’s Child.

The judges have made a decision…Element has been eliminated.