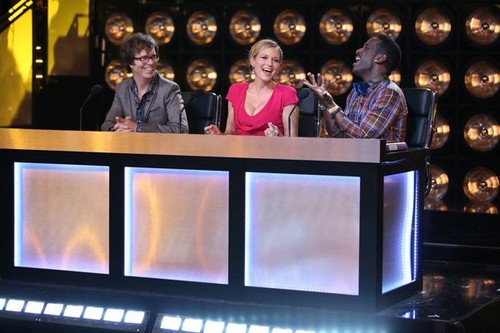 THE SING-OFF premiered on NBC with its 4th season this week and it showcased the country’s top cappella groups performing popular songs in ways that viewers have never heard them before.  This season Jewel will joined the judges table alongside Ben Folds (Ben Folds Five) and Shawn Stockman (Boyz II Men), who both returned. If you missed episode 5, we have a full and detailed recap, right here for you.

On last night’s show the six remaining groups bring out the popcorn for big screen hits.  Good news the show actually followed the theme.  By the end of the evening we were down to the top four because AcoUstiKats and VoicePlay were sent home.

On tonight’s show the song selection is out of the hands of the remaining 4 groups. Judge’s make their best selection to help the acapella hopefuls make it to the finale.

Tonight’s “The Sing-Off” is back and it is going to be an exciting one, which you won’t want to miss. So be sure to tune in for our live coverage of NBC’s The Sing-Off – tonight at 8 PM EST!   While you wait for our recap, hit the comments and let us know how excited you are about the new season of The Sing-Off.

Tonight’s episode of The Sing-Off starts off with a performance by the remaining four cappella groups Filharmonics, Home Free, Ten, and Vocal Rush.

Tonight’s first group to perform will be the Filharmonics, and they will be singing “Baby I Need Your Loving” by the Motown group The Four Tops. Shawn think that their “choreography was slick” and they have definitely figured out how to “make the ladies scream.” He does want them to “pay attention to little details.” Jewel thinks that they “locked their harmonies tonight” but thinks they did “miss a climax.” Ben says they “took their notes and worked on the pitch,” but he really loves them.

The next cappella group to perform on The Sing-Off stage is Ten. Tonight they will be singing “Proud Mary” by Ike and Tina Turner. Ben says their performance was “really strong” and he wants them to take a few risks on their arrangements in the future. Shawn is very proud of them, and he thinks they “killed it.” But, he thinks they were a little too mellow, he thinks there is more they can give. Jewel like what they did with the arrangement, but she wants them to find their identity as artists.

Home Free is up next, they will be singing “Colder Weather” by the Zak Brown Band. Shawn thinks they are the “complete package” and their performance was a “treat.” Ben says they captured the emotion on the song, he did sense a little bit of rare nervousness from them in the first few lines. Jewel wants them to take more risk, and she thinks they are stars.

Vocal Rush is the final group to perform tonight. They will be singing Fall Out Boy’s hit song “Know What you Did In The Dark.” Jewel says they did “so many things right,” and they think it is really great that they have their own identity. Ben thinks they are really “good at drama,” and their performance was fantastic. Shawn says they take on every song “with reckless abandon,” and that they are all “cuties.”

The judges must decide who to send home and who to send to the finale with Vocal Rush and Home Free.

The judges have made a decision, the next group to be eliminated from the Sing-Off is The Filharmonics.