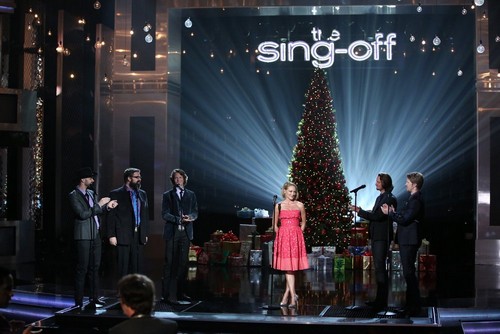 THE SING-OFF premiered on NBC with its 4th season and it showcased the country’s top cappella groups performing popular songs in ways that viewers have never heard them before.  This season Jewel will joined the judges table alongside Ben Folds (Ben Folds Five) and Shawn Stockman (Boyz II Men), who both returned.   Can you believe we are already at the finale? If you missed episode 6, we have a full and detailed recap, right here for you.

On last week’s show the song selection was out of the hands of the remaining 4 groups. Judge’s made their best selection to help the acapella hopefuls make it to the finale.  By the end of the evening the three finalists that remained this season were: Home Free, Ten and Vocal Rush.

The remaining three groups battle for the crown of The Sing Off winner. The judges will perform with the groups — Jewel with Home Free, Shawn Stockman with Ten and Ben Folds with Vocal Rush.  After this double elimination episode a champion will emerge and we will find out who will claim the $100,000 grand prize and a recording contract.  98 Degrees, Pat Benatar and Neil Giraldo, also Pentatonix are set to perform on the special Holiday themed season finale of NBC’s musical competition series “The Sing-Off.”

Tonight’s “The Sing-Off” is back and it is going to be an exciting one, which you won’t want to miss. So be sure to tune in for our live coverage of NBC’s The Sing-Off – tonight at 8 PM EST! While you wait for our recap, hit the comments and let us know how excited you are about the new season of The Sing-Off.

The season finale of The Sing Off starts off with a group performance of “Man In The Mirror” by the remaining three cappella groups, Home Free, Ten, and Vocal Rush. After a recap of the groups that have been eliminated since the series began, judge Jewel and host Nick Lachey perform a rendition of “It Had To Be You.” All of the Sing Off groups that have been eliminated are present tonight for the finale, including fan favorite Street Corner Renaissance.

The previous winners of The Sing Off, Pentatonix will be performing “I Need Your Love” by Calvin Harris next. According to them since they won The Sing Off last season their careers have blown up.

Home Free will be performing their finals song first tonight, they’ll be singing “I Want Crazy” by Hunter Hayes. Shawn is happy that they stepped outside their box and did something a little “crazy.” He thinks that they did awesome tonight and they have the type of sound that American will love. Ben says they were “really good” and “really awesome,” and they should be proud of their nice work. Jewel loved the arrangement, she thinks they performed like true stars tonight.

Host Nick Lachey and the rest of his boy-band 98 Degrees are taking the Sing Off stage next, they will be performing the Christmas classic “I’ll Be Home For Christmas.”

Vocal Rush is taking the stage along side judge Ben Folds to sing the Christmas carol “Little Drummer Boy.”

Ten is performing their finals song next. They will be singing Beyonce’s hit song “Love On Top.” Ben says that Ten sang “Love On Top” great. Jewel was “feeling them” and thinks their performance was “really great.” Shawn says Ten is “blessed vocally,” and they have a great look and style, he compares them to a “box of assorted chocolates.”

Jewel will be taking the Sing Off stage next, with contestants Home Free. They are going to perform the Christmas carol “Merry Little Christmas.”

Up next is Pat Benetar singing the classic “We Belong Together.” She will be accompanied by the Sing Off contestants that did not make it the finals tonight.

The finals group to perform for the Sing Off championship is Vocal Rush. They will be singing “Roar” by popstar Katy Perry. Jewel, Ben, and Shawn give the young singers a standing ovation. Jewel says that she has been “sucked into their gravity” and she thinks that is a wonderful characteristic. Shawn says when he looks into their faces he sees promise and potential, and “no doubt they are the future.” Ben thinks they did Katy Perry proud, he thinks their lead vocals are really great.

It’s time for the judges to decide whether Home Free, Vocal Rush, on Ten will win the Sing Off grand-prize.