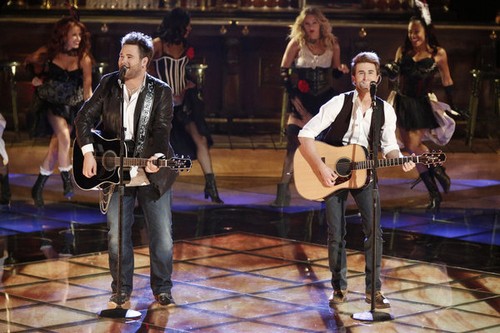 The Swon Brothers took the stage tonight on THE VOICE for one of their final performances.  The Swon Brothers sang “I Can’t Tell You Why” by The Eagles for their new song. On tonight’s show the final 3 performed two songs and one duo live in front of coaches Shakira, Adam Levine, Usher and Blake Shelton for America’s vote and a chance to win The Voice. To see The Swon Brother’s other song, “Danny’s Song” video, CLICK HERE …  To See The Swon’s Duo With Blake, CLICK HERE …

Judges Comments: Usher said, “It is great you guys finally found the girl part of  your life.  The only thing missing was the third Bee Gee, great to see you guys evolving.  Hope it does well for you.”  Shakira said, “I am a fan, I thought it was a very good idea for you to do this song, this new you.  It quite suits you.  I think what you have that is so special is that you have Universal appeal.”  Adam Levine said, “I totally am flattered, they did this song for me because I am a huge Eagle fan.  You guys did a great job”  Blake Shelton said,  “I seriously think this is the best season of the Voice so far.  You  are constantly evolving and it keeps expanding your fans.  Great job!”