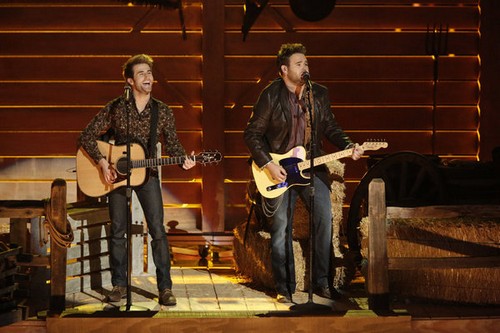 The Swon Brothers took the stage tonight on THE VOICE for their Semifinal performance.  The Swon Brothers sang “Turn the Page” by Bob Seger. On tonight’s show the final 5 performed two songs live in front of coaches Shakira, Adam Levine, Usher and Blake Shelton for America’s vote and a chance to move on to the finals.  If you want to see the Swon Brother’s second song, “Danny’s Song” video, CLICK HERE …

Judges Comments: Usher said, “This was definitely a kickoff tonight, you guys did an incredible job, good job.”  Adam Levine said, “Man it is cool, I appreciate you, another great performance, good on you!”  Blake said, “I am so blown away, it sets the bar really high for tonight.  American has been watching you guys and I really think as far as big steps, we have seen the biggest growth in the Swon brothers. You continue to blow people away!”