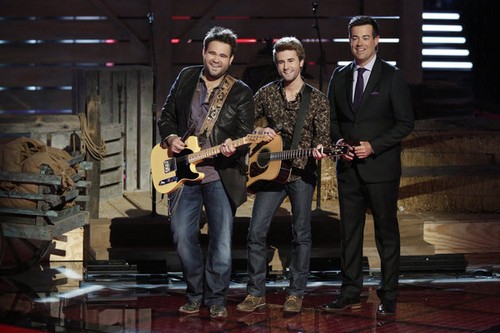 The Swon Brothers took the stage tonight on THE VOICE for their Semifinal performance.  The Swon Brothers sang “Danny’s Song” by Kenny Loggins. On tonight’s show the final 5 performed two songs live in front of coaches Shakira, Adam Levine, Usher and Blake Shelton for America’s vote and a chance to move on to the finals.  If you want to see the video of their first song they performed “Turn The Page,” CLICK HERE …

Judges Comments: Usher said, “Every week you guys come out and surprise us.  It was great to see you go back home.  You guys I have to commend you, you are making us love country.”  Adam said, “I was excited because that is one of my favorite songs and it is the first one I have known very well you have done.  You did an amazing version.”  Blake said, “I think , there is nothing I can say it was unbelievable, it was amazing.”