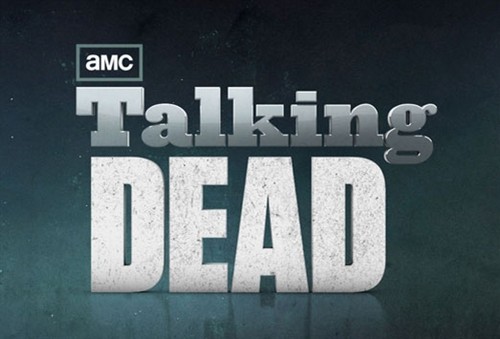 Tonight on ABC right after The Walking Dead the THE TALKING DEAD returns.  The show is the network’s first live after-show that serves as a platform for discussion for AMC’s series, The Walking Dead.

The half-hour episodes are produced by Michael Davies’ Embassy Row and are hosted by Chris Hardwick.  Chris spends time with fans, actors, producers and TV enthusiasts, recapping the most recent Dead episode, providing sneak-peeks and discussion of upcoming episodes and taking questions and comments from viewers.

Tonight on Talking Dead the guests tonight are writer and showrunner Scott M. Gimple represents the crew and talks about tonight’s episode, “30 Days Without an Accident” (which he wrote, naturally), and Nathan Fillion is your celebrity guest.  Nathan is the star of ABC’s Castle.

RECAP: Chris asks Nathan about his reaction to the prison becoming a community; he likes a lot of the logical processes coming up. He likes the idea of a farm and a better defense against the walkers. Scott says that 6 or 7 months have passed and mentions that she council basically decides what they should do to get food and basically administrate for the prison. Scott says that Darryl is very loved by the people for saving a lot and going on runs. Chris then questions about what happened to Patrick, Nathan says that of course it had to get worse and that he believes it’s a sickness in the air. Scott then mentions how Patrick said he didn’t feel well and died, Chris then points out how Patrick is the voice in Phineas and Ferb. Chris then talks about the pacing of the season; everyone looks comfortable and okay. Scott says that there is a lot of character interaction coming up; they will dwell on the characters story more. Scott says that it will get much worse very soon, people are asleep but Patrick is now a walker inside of a cell block full of people. Chris mentions how Norman and Andrew told him the show gets much more rough, Scott says that it’s going to get much worse and emotionally painful very soon.

Chris asks Andrew Lincoln about the questions; Andrew mentions that if there was a good reason to killing a human then it’s worth to accept because after Woodbury they realized not all people are good. Chris ask Scott about the protocols of the prison; Scott mentions that asking the questions are to make sure the people being let in could be trust. The big change with Rick was how he is very open to letting people into the prison; Chris asks Nathan about Clara in the woods. Nathan said he thought she was a zombie and believed she survived was because of her poor hygiene and the head in the bag probably disguised her scent from the other walkers. Nathan says he bought how good she was but the way he saw going over to a bag that the zombie head was in; Scott mentions how the director decided to not show the head because somethings you don’t see are better. Nathan mentions how Andrew mentioned how he is amazed how they bring such good actors to the show and just kill them. A fan named Rob asks what Clara represented; Nathan says she is the example of giving up. Chris mentions that he believes that it means that not everything is okay; to show Rick you can’t pretend it’s all fine. Another fan asks about if Carl’s respect for Rick has come back since he’s been more sane lately; Scott believes that they have had improvements on their relationship right now after the months went by

A fan from the audience comes up and she asks Scott about the walkers falling from the roof; Scott says the writers decided it because it was a joke at first but then after a while thinking about it they thought it could work. Scott says it’s one of the greatest moments to joke about something and it becomes a part of the show. Chris assume the roof was very fragile because of the helicopter crashed and how the water damage weakened the roof; Nathan questions Bob’s problem with alcohol. Chris said he didn’t expect to see Beth be completely fine with Zach’s death, Scott says she has changed from being suicidal to becoming someone that is just like Taylor Swift; not caring about her ex boyfriends. Scott says that her emotional reaction that will play throughout the season.

Chris asks how long it took to make the whole store sequence; Scott says that the director loved the idea of the helicopter coming out and it took them much longer then usual since it was the first episode of the season.

Chris asks about Carol’s knife lessons; Nathan says that it’s actually really good to teach the kids to protect themselves from the walkers. Chris says the kids are so bratty poking the walkers, a caller asks Scott about how Tyreese didn’t like anything he did and if his relationship with Karin has made him soft. Scott says that Tyreese has always been warm hearted and never enjoyed killing walker and believes that she has nothing to do with it; but he’s like a big teddy bear. A fan asks if Carl feels any guilt to killing the kid last season; Nathan says he practical and he’s more accepting to what happens in life now from what they are growing up in. Scott says a big part of this season is about growing up, it’s something they have to do to move on.

A fan comes up to ask him how many new characters are going to be on the season and if they are not from the comic; Scott says there is a number of them and that they have brought in Abraham in the comics coming in. Chris asks how they size up new characters on the show; Nathan mentions he loved Michael Rooker as Merle but he was taken away and loved him when he came back. Nathan then hated how he died. Chris asks about Maggie and Glenn; Nathan says nobody would like to care for a child in such an atmosphere. Scott says that they have found a stable place but Glenn is still not feeling safe in the prison. Chris asks if they could bring back a cast member who would it be, Scott says he would love to have Michael Rooker come back. Chris asks how they bring in new characters but not have the current ones drift away; Scott says it takes a lot of planning and that there are going to be a bunch he has never mentioned but as long as the involve with one another it will work. Nathan says he likes the new characters to take bets on which will survive.

Chris asks Scott about the scene the showed and he mentions it’s the very first moment; Nathan now knows why there is so many zombies around the fence because of someone feeding them. Chris asks about the Governor and Nathan mentions that nobody is questioning about him because they are all happy to be in this new place that is safe. Chris asks who he would like to see at the end and Nathan says Daryl would be his favorite.