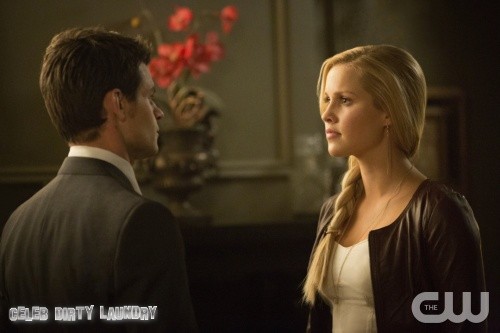 Tonight’s THE VAMPIRE DIARIES finally returned to CW with another exciting episode after another hiatus. I cannot wait until the next episode, it is going to build the groundwork for Klaus’s new spinoff, The Originals.  While you wait for next week’s episode of the Vampire Diaries, as usual, we have some juicy spoilers and a sneak peek video for your enjoyment below!

On tonight’s show after making a decision that infuriates Klaus, Elijah proposes a life-changing challenge for Rebekah.  Caroline finds that her carefully laid plans for the perfect Senior Prom night are disrupted by Elena, so she turns to an amused Klaus for a solution.  Determined to get through to Elena, Damon and Stefan both attend the prom, but the evening begins to spiral out of control despite their efforts.  When Elena suddenly lashes out in a way no one could have predicted, Matt turns to Rebekah for help.  Finally, Bonnie makes a terrifying discovery, and Klaus receives a message that could change everything.  Did you watch tonight’s episode?  We did and we recapped it here for you!

Spoiler alert: If you’re one of those people who doesn’t like spoilers, stop reading now! We have some juicy spoilers for you about the season 4 episode 20 of CW’s “The Vampires Diary.”

Official CW Synopsis: Acting on a mysterious tip that a plot is brewing against him in New Orleans, Klaus (Joseph Morgan) makes a trip to the town he and his family helped build. Klaus’ questions lead him to a reunion with his former protégé, Marcel (guest star Charles Michael Davis), a charismatic vampire who has total control over the human and supernatural inhabitants of New Orleans. Determined to help his brother find redemption, Elijah (Daniel Gillies) follows Klaus and soon learns that Hayley (guest star Phoebe Tonkin) has also come to the French Quarter searching for clues to her family history, and has fallen into the hands of a powerful witch named Sophie (guest star Daniella Pineda). Meanwhile, in Mystic Falls, Damon (Ian Somerhalder) and Stefan (Paul Wesley) continue with their plan for Elena (Nina Dobrev), while Katherine (Nina Dobrev) reveals a surprising vulnerability to Rebekah (Claire Holt) and asks her to deliver a message.

Next week’s show is building the groundwork for the Vampire Diaries spin-off series The Originals.  Actually it is the pilot within a Vampire Diaries episode.  On the new series we will get to see our weekly dose of the Mikaelson family drama.

Klaus heads to New Orleans because he finds out someone is plotting against him and Elena lets Damon and Stefan know he has gone, they are skeptical.  The preview for next week starts with,  “Welcome to New Orleans where the living are easily lost and the dead stick around to play.”  Klaus meets a former protege who he sired.  Or as Marcel says, “his mentor, his savior, his sire.”  Klaus is somewhat envious because he feels Marcel has what he has always wanted, power, loyalty and family.  Klaus wants what Michael has.  Klaus wants to be King.  Elijah and Rebekah head into town to support their brother.

We will also be meeting some new powerful witches next week.  Back in Mystic Falls Damon and Stefan continue to try to help Elena find her humanity.

The Vampire Diaries Season 4, Episode 20“The Originals” airs on the CW on April 25th, 2013. Check out the preview video & some photos from episode 20 and let us know in the comments below what you think!  Which prom dress are you loving the most?