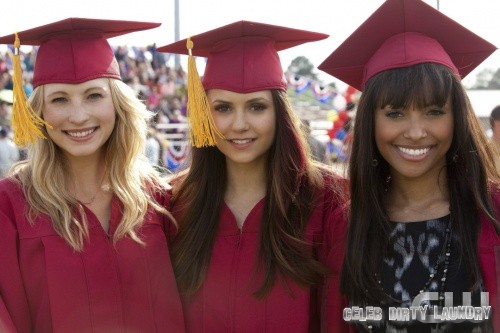 Tonight’s episode of THE VAMPIRE DIARIES was great, and we are on the way to season 4 finale next week.  Next week’s episode is called, “Graduation” and we have managed to get our hands on a some spoilers/teasers, photos and a preview video to wet your appetite.

On tonight’s show Caroline tried to distract Elena by focusing on simple tasks like sending out announcements, but Elena won’t be swayed from her new obsession killing Katherine.  Sheriff Forbes called Damon and Stefan to the hospital, where someone has been attacking patients.   The boys figure out it is Silas storing up.  Still trying to force Katherine to help her, Bonnie refuses to give up on her plan to defeat Silas. As a violent wind storm causes a power outage in Mystic Falls, ghosts suddenly appear – some with good intentions and some bent on revenge.  The veil has been semi-dropped, the first ghost over the veil was Alaric.  Did you watch tonight’s show?  We did and we recapped it here for you.

Spoiler alert: If you’re one of those people who doesn’t like spoilers, stop reading now! We have some juicy spoilers for you about the season 4 Finale of CW’s “The Vampires Diary.”

Official CW Synopsis:  WHO WILL TAKE THE CURE? — “On Graduation Day, Mystic Falls is overrun with ghosts intent on settling old scores and fulfilling their supernatural destinies.   Damon’s (Ian Somerhalder) life is in danger after a ghostly encounter, while Matt (Zach Roerig) and Rebekah (Claire Holt) join forces to battle a ghost determined to find the cure.  As everyone gathers for the graduation ceremony and the ghosts converge, help comes from an unlikely hero.  Caroline (Candice Accola) receives a touching and unexpected graduation present, and Bonnie’s (Kat Graham) plan leads to the closing of the veil.  Elena (Nina Dobrev) makes a decision about the Salvatore brothers and faces an epic confrontation with Katherine (Nina Dobrev).  Finally, Stefan (Paul Wesley) discovers a horrifying clue to the mystery surrounding Silas.  Chris Grismer directed the episode written by Caroline Dries & Julie Plec.”

On next week it is Graduation time and as we all know, nothing happens normally in Mystic Falls.  What that means is, ghosts are everywhere during graduation.  From photos we have seen, it looks like graduation starts off normally but by the time everyone is picking up their diplomas, some ghost are looking to get their revenge.  All the ghosts want the cure and they’re going to try and ransack graduation to get it!

Not only are they willing to ransack graduation, they are willing to kill everyone in Mystic Falls to get the cure and Silas.

Caroline’s who is played by Candice Accola said the following about the finale, “We’re going to have a very dramatic season finale as the show always does. We will be closing a chapter, we might be saying goodbye to someone, but we’re going to say hello to a new beginning.”

From the promo photos below we can see that Klaus returns to Mystic Falls.  It appears Klaus and Caroline are having an intense discussion.   Could Klaus finally be ready to declare his love for Caroline?

Rumor has it that we are going to lose a main character, so grab your Kleenexes.  Who do you think it is?  I am guessing it is Matt or Rebekah.   One character may come back from the dead.  Our guess is Alaric or Jeremy.

The “cure” will also be drunk at the end of the episode, I wonder who is the lucky person?  The person taking it and the ramifications will play out in Season 5.

The Vampire Diaries Season 4, Finale Graduation” airs on the CW on May 16th, 2013.  Check out the preview video & some photos from the finale and let us know in the comments below what you think!