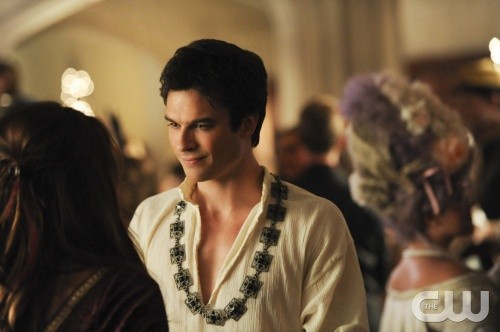 THE VAMPIRE DIARIES episode 5 “Monster’s Ball” opened and Dr. Maxfield has Jesse. He holds some blood out to him and he wakes up. When Jesse goes for it Maxfield pulls it back. Maxfield turns on his recorder and starts talking into it. Maxfield talks about Jesse and how he hasn’t fed in three days, that his fangs are starting to come in and his eyes are sensitive to light. Maxfield says Jesse is the perfect candidate. (For what? His own personal Dracula?)

Elena is writing in her diary. Mostly about Bonnie and how much she misses her and how Bonnie wanted her to stay in college. Elena all,so brings up the fact that this is easier for Stefan because he can’t remember anything. Elena is still trying to figure out why Maxfield covered up the fact that a vampire killed Megan. Elena is going to call Damon bit he shows up. Damon tells her he wants her to be his plus one for the ball. (These kids sure do go to a lot of social gatherings. What is this? Like four weeks in a row now? )

Caroline is as happy as she can be with Tyler. Tyler however is as unhappy as he can be with Caroline. Tyler is still pissed at Klaus for killing his mom. Caroline tells,hi she wants him to go to the ball with her and they will go as Bonnie and Clyde.

Elena heads over to Megan’s memorial and runs into a guy who says he has known her since they were kids. Elena ask him what he honks happened to her. He leaves.

Nadia answers a call from Silas he wants Katherine and he wants her like yesterday. Nadia mocks his impatience and lack of mind control. Silas tells her she need not worry about any of that because he has something better cell phone tracking.

Katherine is telling Nadia to just get over with already and her over to Silas so he can get a drop,or two of her blood and cure his immortal self problem. Nadia tells her it’s more like all her blood he will need.

Jeremy is with Damon who is explaining that Silas wants to die and maybe just maybe with his death that will balance things out and they will be able to bring Bonnie back.

Damon offers Silas his help in the way of him becoming mortal. Silas is uncertain as to why Damon is willing to help him die.

Bonnie is there with Damon and tells him she thinks that Silas wants to destroy the other side completely. Bonnie thinks that Qetsiyah is the key and is bound to someone or something on the other side and that needs to broken in order to seal Silas fate. Bonnie has her misgivings and it is all but confirmed she is right when Silas tells Damon that he will bring Bonnie back the condition that Damon kill Stefan.

Katherine is with Nadia who is telling her she has been looking for her for 500 years because Katherine killed her mother in Paris in 1645. Naturally Klaus plays a part in her demise as well. Katherine slowly begins to realize that Nadia is not planning on ever releasing and in desperation Katherine grabs a cane, slams it into Nadia and then takes off running.

Jeremy and Bonnie are arguing about Damon’s plan to bring her back. Jeremy agrees that messing with magic can cause major consequences but at the same time Jeremy can’t stand the fact that he can only see her and hear her. Jeremy wants to be able to reach and touch her( I guess he wants Bonnie to be his own Personal Jesus). Jeremy begs her to let Damon try and help her.

Over at the costume ball we have Damon dresses an Henry the VIII and Elena is Anne Boleyn (of course). Stefan is James Dean, and Caroline and Tyler are in fact Bonnie and Clyde. Damon and Elena are dancing. Elena starts her pity me crap and says she feels guilty for shagging Damon all summer while meanwhile her friend was dying. Elena is determined to get to the bottom of what really happened to Megan. Elena notices the mystery guy again and approaches him to ask him who he is. The mystery guy evades her question but not for long. Elena uses her vampire wiles and glamours him into telling her his name and then forgetting she ever asked. His name is Aaron.

Qetsiyah is all done up as Cleopatra. She sees Stefan and walks over to him at the bar. Stefan doesn’t recognize her but once she introduces herself he realizes she is the one that stole his memory. Damon drags Qetsiyah away from Stefan. Silas approaches and says hello. While Stefan is distracted Damon comes up behind him and snaps his neck. (Wait…….what?)

Damon has apparently done Stefan a solid. Snapping his neck brought his memory rushing back. Damon takes the jacket off of him and Silas puts it on so he can go back out to fool Qetsiyah and see what he can find out from her. Damon says she will figure it out. Silas says that she won’t. Silas chit chats with her for a moment before revealing that he is Silas. Silas glamours her and then ask her where they anchor is. Qetsiyah doesn’t know she tells Silas the gypsies took it. She tells him that there is a talisman somewhere at the ball that will help her find the anchor. Silas tells her to look for it and then makes her forget who he really is. Qetsiyah heads of to look. Silas feels a sever pain in his head, it’s die to the fact that Stefan is waking up and it causes Silas to lose his powers. Stefan knows admonish the one who snapped his neck. Damn knocks him out and Silas’s powers return.

Katherine went looking for Nadia and finds her dying in a alley. Nadia informs Katherine that she is in fact Nadia’s mother. (Did not see that one coming.)

Elena finds Maxfield and ask him to dance. Elena cuts right to the chase and ask him why he lied on Megan’s death certificate. Maxfield didn’t want Megan’s parents to know she was murdered by a vampire. Elena ask hi what it is exactly that he thinks he knows about vampires. Maxfield replies by saying people are watching her and her friends and that if she is smart she will go back to Mystic Falls.

Tyler and Caroline are discussing the fact that he is more obsessed with vengeance that he is with loving her. Tyler tells her he needs to leave and haunt down Klaus. ( Look out Originals here he comes.)

Qetsiyah found her artifact. She holds it and chants. Silas rushes in. She wants to know of he is there for the show. Silas collapses with another head pain.

Damon creeps over to Stefan and ask him if he is awake. Stefan responds by jumping up and returning Damon’s earlier favor by snapping his neck.

Silas is having trouble staying upright and as he falls Qetsiyah goes over to him and calls him Stefan. Speaking of which….Stefan rushes in and tells her that she is in fact hovering over Silas who is a lying liar who has been lying to her and that he has been working with Damon. Qetsiyah is not happy and tells Silas he won’t be around for the finding of the anchor. Silas says she can’t kill him because she loves him. Qetsiyah corrects him she did love him. She reaches into Silas’s chest and pulls his heart out. She crushes his heart and his blood stops flowing. Silas is now just a shriveled up nasty looking thing.

Maxfield stops his son Aaron in the way out (yes that Aaron). Maxfield takes his car keys. Aaron ask for cash for a cab. Maxfield warns him to stay away from Elena.

Caroline comes in as Tyler is packing. She tells him she isn’t going to try and change his mind. Good thing because he is hell bent on hunting Klaus down. Caroline then tells Tyler that if he walks out they are done. Tyler walks out. Caroline breaks down.

Damon and Elena are looking at the shell,of Silas that is now in their living room. They know he needs Katherine’s blood in order to become mortal so that Bonnie can come back. Elena also tells Damon that Maxfield knows all about vampires. Someone knocks and to her misfortune it’s Katherine. At first when she sees Silas she thinks she is home free but soon realizes that is not the case. Katherine tells Damon she doesn’t want to die but he gives her to Silas anyway. Silas has had his fill and as Katherine drops his hand comes up looking as human as ever. Damon and Elena hear a heart beating. It’s Katherine’s and they can’t believe that she is still alive. Katherine comes to and sees them. Katherine ask them if she is in hell.