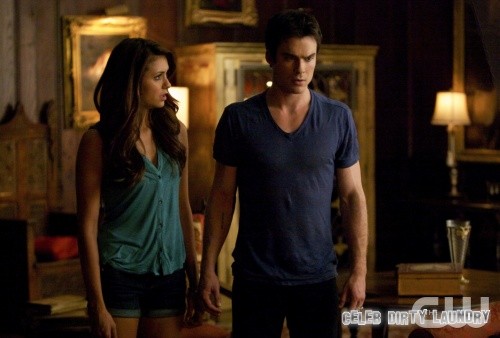 Tonight’s The Vampire Diaries returned to the CW and the action between Silas and Tessa is heating up.  I just cannot wait until the next episode, while you wait for next week’s episode, as usual, we have some juicy spoilers and a sneak peek video of “Handle with Care” for your enjoyment below!

On tonight’s show on campus, Elena is touched by a sad and secretive student named Aaron. Elena and Damon attend the Whitmore Historical Ball dressed as Anne Boleyn and Henry VIII. At the Ball, Elena shares a dance with Dr. Maxfield, who has a disturbing message for her. Caroline’s evening at the Ball takes her from happiness to heartbreak. Meanwhile, Nadia reveals her surprising history to Katherine, and Damon tries to make a deal with Silas. Silas’ demand that Damon commit an unthinkable act of killing his brother Stefan and it leads to a violent confrontation.  Did you watch tonight’s episode?  We did and we recapped it here for you!

Spoiler alert: If you’re one of those people who doesn’t like spoilers, stop reading now! We have some juicy spoilers for you about the season 5 episode 6 of CW’s “The Vampires Diary.”

Official CW Synopsis: “INDESTRUCTIBLE – Silas (Paul Wesley) happily announces his new goal to Damon (Ian Somerhalder) and Elena (Nina Dobrev), but they are skeptical when he promises to accomplish one important task in return for their help.  Tessa (guest star Janina Gavankar) confidently tells Stefan (Paul Wesley) about her next move, then realizes that Silas has managed to outsmart her. A desperate Katherine (Nina Dobrev) discovers a new and unexpected consequence of becoming human again, and realizes she needs a new place to stay.  In exchange for a spot in the dorm room, she offers to show Caroline (Candice Accola) how to get answers from Dr. Maxfield (guest star Rick Cosnett). Bonnie (Kat Graham) is touched by Jeremy’s (Steven R. McQueen) strength and determination to stand by her. Finally, Damon is stunned when he figures out the secret to Tessa’s plan.”

On next week’s show Katherine will still be struggling with being human and is going to head to Whitmore College and leave the Salvatore mansion.  It looks like Katherine and Caroline will be bonding.  From the pictures below, Dr. Maxfield (Rick Cosnett) will be playing a big part in next week’s episode.  Jeremy and Silas gets chummy and Silas pinkie swears he can bring back Bonnie.

The Vampire Diaries Season 5, Episode 6 “Handle with Care” airs on the CW on November 7th, 2013. Check out the preview video & some photos from episode 6 and let us know in the comments below what you think!