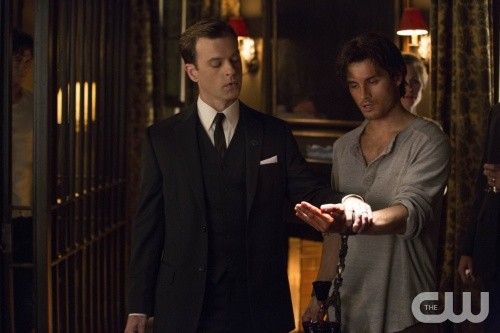 Tonight’s The Vampire Diaries returned to the CW and I am really enjoying this season.  The show is going on hiatus for one week, sadly we won’t get s new episode next week.  However, we managed to get some juicy spoilers and a sneak peek video of “Dead Man on Campus” for your enjoyment below while you wait for it to air December 5th, 2013!

On tonight’s show at Whitmore College, Elena and Caroline decided it was time to throw a big party, but their plans were interrupted when Jesse suddenly needed Caroline’s help. At Elena’s request, Damon came up with an effective method to get Wes to answer his questions. At the party, Elena found that she and Aaron had a lot in common, and Caroline grew more concerned about Jesse. Meanwhile, Katherine  did a favor for Matt and managed to get through to Stefan (Paul Wesley), who was still struggling to overcome the events of the summer. Finally, Bonnie did her best to cope with her new reality, and Damon made a terrifying discovery about a secret society.  Did you watch tonight’s episode?  We did and we recapped it here for you!

Spoiler alert: If you’re one of those people who doesn’t like spoilers, stop reading now! We have some juicy spoilers for you about the season 5 episode 9 of CW’s “The Vampires Diary.”

Official CW Synopsis: “FLASHBACKS TO A DARK TIME IN DAMON’S LIFE – Stefan (Paul Wesley) continues to offer Katherine (Nina Dobrev) his support while trying to mask his own pain, until Caroline (Candice Accola) shows up with an unusual form of therapy. After trying to make amends with Caroline, Elena (Nina Dobrev) grows so concerned about Damon (Ian Somerhalder) that she turns to Aaron (guest star Shaun Sipos) for help. Later, when Damon tells Elena about a terrible ordeal in his past that he has kept secret for decades, she shares the disturbing information she just learned about her own family. Finally, Aaron decides on a desperate course of action after a conversation with Dr. Wes (guest star Rick Cosnett).”

It turns out Wes belongs to a secret society, the Augustine Society and they are a cruel society.  Wes has taken Damon captive, but we learn he was a captive years ago too. Damon was a Augustine vampire.

The Vampire Diaries Season 5, Episode 9 “The Cell” airs on the CW on December 5th, 2013. Check out the preview video & some photos from episode 8 and let us know in the comments below what you think!