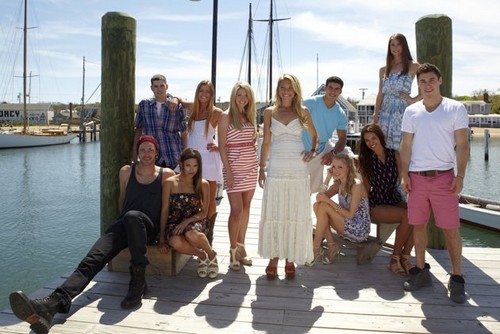 Tonight on the ABC Family THE VINEYARD continues with a new episode called, “Loose Lips Sink Ships.”  On tonight’s show Jon and Luis’ rivalry gets them in trouble at work.

If you have never watched the show ABC Family’s newest original docu-series, The Vineyard , is set against the idyllic backdrop of Martha’s Vineyard, MA, and features the island’s iconic Black Dog Tavern. The series follows a mix of locals and transplants living and playing together for the summer. Rounding out the cast of seven girls and four guys is a Latin pop princess, a hopeless romantic and a pre-med student, just to name a few. It’s sure to be an intriguing combination of new friends, new rivals and tight quarters, all resulting in a summer of trouble and romance.

On tonight’s show Jon steps up his pursuit of Katie, much to Luis’ chagrin; Jackie kisses Luis, igniting jealousy in Katie; Ben gives Sophi a tour of the island via boat; Jon and Luis’ rivalry gets them in trouble at work.

Tonight’s episode is going to be another fun one, which you won’t want to miss. So be sure to tune in for live coverage of ABC Family’s The Vineyard Season 1 Episode 2 “Loose Lips Sink Ships” — tonight at 10PM EST.

The show begins with Emily and Sophi talking about Katie, Jon and Luis at the bonfire. Soon Ben comes into the bedroom looking for his shirt. After he leaves Sophi says it was an innocent sleepover. Taelyr comes in and the girls dish about Sophi’s sleepover and the fight that happened at the bonfire.

Jackie and Gabby talk about Luis and how Jackie wants to throw him a birthday party. Gabby teases her about being in love with Luis. She says that isn’t just a summer crush.

Katie and Luis also talk about the fight with him and Jon at the bonfire. Katei says she can defend herself and that she has no interest in Jon. She then asks him to go on a picnic with her for his birthday.

Jon and Daniel do a little boogey boarding. Daniel wants to know what happened with Katie at the bonfire. Jon rehashes how Luis told him he can’t have Katie but that is not going to sway him from pursuing Katie.

Cat goes to talk to her mom about blabbing that Ben got kicked out of the coast guard. Cat is hurt by her mom’s actions. Her mom pleads innocent but Cat does not believe her.

On the docks Luis and Jon have to work together and of course talk crap to each other. Luis once again tells Jon to stay away from Katie. The two start a little push shove fight that once again gets physical.

Katie and Emily have to work together but Emily doesn’t want to help her. When the subject of Luis birthday comes up Emily offers to help plan a party for him.

Luis and Cat meet up and talk about her fight with her mom. Oh and Cat tells him what a spoiled brat Sophi is and how she was all over Ben. Cat talks him about the fight with him and Jon. Luis says Katie is just figuring stuff out and is not into Jon.

As Katie is walking to The Black Dog house Jon pulls up and offers her a ride. At first she resists but then her persuades her to get in. He does not take her home but decides to take her somewhere else, without telling her.

Emily and Jackie plan Lou’s party but can’t agree on a place. Emily wants to rent a yacht and says they can use their cuteness to get a boat for free.

Jon takes Katie to a beautiful spot on the vineyard over looking the ocean. It is secluded and she is actually a little impressed. She is glad she came. He apologizes for what happened with Luis. Katie says it upsets her the two can’t get along because she wants to be friends with Jon and that Luis is a friend of hers. The two talk about what he wants to do in medicine. Then he wants to know her plan, which is simply her figuring out her life this summer. Luis sees the two of them arrive back at the house together and is not happy. Inside the house Daniel, Sophi and Teaylr get ready to go clubbing. Katie agrees to go with them. Jon goes to get ready two and Luis walks in their room. Jon asks him if he is going to the club he says no and tells him to have fun. Before he leaves Jon tells Luis to expect to sleep on the couch. When Emily comes in later looking for Luis Jon denies seeing him.

Sophi and Ben meet up at the club and make plans to take his boat out the next day. It is a date. Meanwhile at the club Jon tells Daniel he is going to put the moves on Katie that night. He tells Daniel about his time at the beach with Katie. He makes a beeline for her. When he does he tries to kiss her and she pushed him away, then runs off.

After Katie runs off she calls her boyfriend Matt and leaves a message for him.

Cat tries to talk to Ben when he picks up Sophi at the Black Dog Tavern but he rebuffs her attempt. Ben and Sophi head out for their date leaving Cat upset.

At the house Emily Gabby and Daniel talk about what happened with Katie and Jon at the club. The two girls get annoyed that everyone is all about Katie. Meanwhile Katie tells Luis that Jon tried to kiss her. She relays how she told Jon that she wanted to be friends and that she is pissed.

Emily tells Daniel and Gabby that they got a ship for Luis party. They wonder if Jon will come and discuss the drama on the island.

Luis asks Katie what is going on with her. Katie tells Luis that she is confused and just wants to talk to her boyfriend, who she has hardly spoken to since she arrived. Luis tells her she deserves a lot better than a boyfriend like that.

Ben and Sophi head out on his boat so she can get a view of the island. He shows her the sights including the house she is staying in. Sophi asks what the deal with Cat is and he says they have history. He tells her that his and Cat’s relationship is complicated but he can’t tell her why. Sophi decides they shouldn’t hang out at The Black Dog.

Katie goes to visit a family friend. They talk about her boyfriend Matt and where it is going. The friend says she thinks after four years that you should know. Katie then talks about what Luis told her about deserving better. This prompts a talk about whether or not Luis is interested in her.

Cat is sitting on the dock when her mom comes to find her. Even though Cat doesn’t want to talk her mom does and tells her they have to trust each other. Cat says he can’t trust or tell her mom anything. Her mom doesn’t know how to convince her that she didn’t tell Ben’s secret. Cat tells her mom Ben is out with Sophi. Her mom wants them to start building their relationship.

It is time for Luis party on the yacht. Emily, Jackie and Daniel get the boat ready. Meanwhile Katie takes Luis on a picnic by a lighthouse to keep him in the dark about the party, which is a surprise. They talk about his writing, he writes poetry. Katie tells him to recite her a poem but he tells her maybe he will write her a poem. She pulls out cupcakes and candles for him to celebrate his birthday. Katie tells him she has to swing by the Black Dog real quick and asks him to go with her. When they arrive at the ship Luis is surprised the party is for him, Jackie is the first to greet him with a hug. Jon and Luis even exchange nice words. Jon takes Katie aside to talk about the attempted kiss. He apologizes but says she gave him mixed singles. She tells him that she feels uncomfortable and there is nothing between them. Some group photos are taken as it seems that the group is getting along. Emily flirts with Jon who is paying attention to her because Katie basically ditched him. Sophi relays her date with Ben to Taeylr, including the Cat conversation. Sophi calls Cat scary. Luis and Cat talk at the party and she reminds him that Katie still has a boyfriend. Cat tells him she is worried about him and lets him know that Jackie set the whole party up with Katie. Jon and Emily leave together. Luis thanks Jackie for the party as Katie watches them.