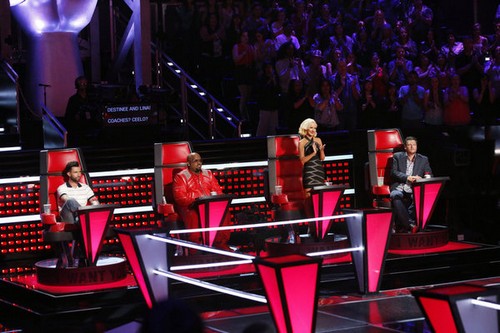 THE VOICE is one of our favorite singing reality competitions because the judges – definitely have a good time and are even quite funny. Tonight, The Voice season 5 will be returning for “The Battles Premiere, Part 2”  on tonight’s show the coaches continue to winnow their teams, pitting artists in head-to-head duets..  There was some amazing battles on last night’s show. In case you missed it, check out our LIVE RECAP — CLICK HERE.

On last night’s show the moment of battle had arrived. The coaches had to cut their teams in half over the next four nights; a lackluster performance could spell the end of each singer’s fairytale. Luckily for the contestants, there is a safety net: each coach also has two steals, where they can snag a losing contestant from another coach for a second chance at stardom.  It was a wild night full of gruelingly competitive performances and crushing heartbreaks.

On tonight’s show the battles continue and the coaches enlist the help of the music industry’s top recording artists to offer their knowledge and skills as advisers. Adam Levine teams up with Ryan Tedder of OneRepublic, Blake Shelton with Cher, CeeLo Green with Miguel and Christina Aguilera with Ed Sheeran.

Tonight’s  The Voice “The Battles Premiere”  is going to be an exciting one, which you won’t want to miss. So be sure to tune in for our live coverage of NBC’s The Voice – tonight at 8 PM EST!   While you wait for our recap, hit the comments and let us know how excited you are about the new season of The Voice.

RECAP: The next battle is team Christina’s Jacob Poole and Matthew Schule, Jacob really wants to break out into music; he believes it’s the right thing for him in life. Matthew had the fastest turn from all 4 coaches in the history of The Voice. Ed and Christina is coaching them and Ed mentions that both of them were just amazing; both so energized.

Christina felt like Matthew was a little off at their final rehearsal and kind of wants their battle to be more aggressive; to show how bad they want it.

CeeLo believes they were amazing with the intensity; he loved the choreography. Adam said it was a musical ass whooping; he believed that nobody got wooped on stage but would give Matthew the edge. Blake says it was truly amazing; he’s waiting for some nose bleeds. He says that Jacob was very worth my than a one chair turn. Christina says that they both blew them away; the song was perfect and they nailed the song. Christina decides the winner of the battle is Matthew.

Jacob says that he really had fun and felt like he is ready to approach music on his own right now; Blake wished he had a steal left to have him on his team.

Now it’s team CeeLo with Kat Robachaud and R. Anthony. Kat auditioned in memory of her father to make him proud; she is a rocker and has a deep passion for music. R. Anthony is a gospel singer and waited a long time to come back to music. They are singing “I Don’t Want To Miss A Thing” by Aerosmith. CeeLo paired them together because they are complete opposites he felt they could really blend in a weird but amazing way. Miguel tells them both their flaws in what hey are doing in the song; he is delivering them some honest critique.

Adam says that he feels like an idiot for not turning around for Kat but Anthony really came out of nowhere challenging Kat so well. Blake said that R came out of nowhere but felt like Kat got the edge; loving her energy. Christina says that Kat has great stage presence but R has amazing vocal control. CeeLo decides the winner of the battle is Kat. R. Anthony says that he is disappointed but he is going back to nothing but music. We also see that Cole Vosbury won his battle; we even see that E.G. Daily won her battle. We even see Ashley Duboe win her battle.

The next battle is between Blake’s team Monika Leigh and Ray Boudreaux; Monika came to the voice hoping to finally pursue her singing career and even got three coaches to turn. Ray came to The Voice to make a new start for his family and his performance got 2 chairs to turn. Blake paired them together because they have a nice Blue sound and gave them “Wonderful” by Grand Funk. Cher says that Ray has a much stronger and louder voice; Monika is going to have to pick it up.

Christina says they brought the energy needed but felt Ray was digging much deeper and felt more consistant than Monika. CeeLo says that Ray can really sing but felt that Monika got a little lost at one point. Adam says he’s mad at her for not picking him but Ray has so much potential and talent. Blake says that he’s going to DVR this when he gets home, he loved their performance. Blake decides the winner of the battle is Ray.
[10:00:04 PM] Chris: Monika says that she is so honored to have performed infront of the coaches and CeeLo steals Monika; she is back into the competition and loved her fighting.