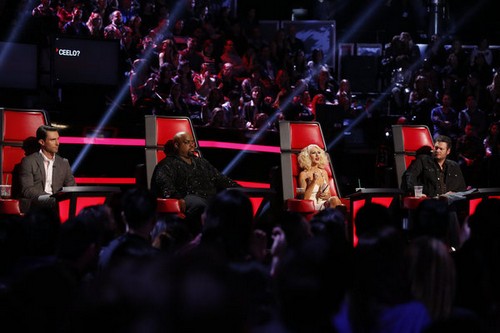 THE VOICE is one of our favorite singing reality competitions because the judges – definitely have a good time and are even quite funny. Tonight, The Voice season 5 will be returning for a 3 night event  “The Live Shows Premiere, Part 2”  on tonight’s show CeeLo and Xtina’s artists perform live for your votes and a trip to the Top 12.  Anything can happen when the show goes live.  In case you missed last nights show, check out our LIVE RECAP — CLICK HERE.

On week’s show the first of the live rounds started and Adam Levine’s team and Blake Shelton’s team hit the stage.  Carson reminded America that they had a lot of power and the round began.  Now it was getting real.  The singers already faced plenty of pressure in the battles and knockouts, but starting tonight, their fate was in America’s hands. Also on the show Christina joined rapper Flo Rida to show ’em how it’s done, singing their new single “How I Feel.”

On tonight’s show the live show continues and the top 20 artists perform live in front of coaches Adam Levine, Blake Shelton, CeeLo Green and Christina Aguilera for America’s vote.  Tonight is Cee Lo and Christina’s teams turn to impress America.  The singers of last night and tonight hope to win a spot in the Top 12 and one step closer to win the grand prize.  Also on tonight’s show Christina and A Great Big World will team on “Say Something.”

Tonight’s  The Voice “The Live Shows Premiere”  is going to be an exciting one, which you won’t want to miss. So be sure to tune in for our live coverage of NBC’s The Voice – tonight at 8 PM EST!   While you wait for our recap, hit the comments and let us know how excited you are about the new season of The Voice.

RECAP: To kick off the night is Christina Aguilera with another live premier of a new song. First up for tonight is Amber Nicole from team CeeLo; she was previously with Christina but stolen by CeeLo in the knock out rounds. Amber mentions she’s been getting a lot of support from her family and is motivated to be the best she can be; CeeLo gave her a country song wanting to show case how different her range is.

Adam says that she looks beautiful and loves how CeeLo makes his artist go a different route; the only thing that bothered him was the big note which was a little under but in general it was really good. Blake says that he could of made her do country, he believes that she did a good job and agreed with Adam on that one note. Christina says she loves Amber and she is so happy she found a home in CeeLo but says that country suits her with her twist on it; she really enjoyed her performance and the note was a little too sharp. CeeLo says that she looks beautiful tonight and she did a great job, he believed his challenge wasn’t all that hard for her and was impressed at how great she did.

Up next is Jonny Grey and his blind audition was on of the scariest things he has ever done, he feels like this is the opportunity for him to play music. He was called down by a military base to perform for some of the soldier there. CeeLo wants him to sing his song as if it’s his own, he wants him to have the message of the song connect with people.

Adam says he loves his voice so much and thought that he completely dominated the song; he felt that he was much better near the end and enjoyed his performance a lot. Christina says that she agrees with Adam, it was so consistent and that he was very accurate; she loved his attitude with the song and executed it so well. CeeLo says he did a great job for one of his favorite songs, he believes that the record speaks to him so much and his voice just suited it so well; he feels like he nailed the son.

Next up is Tamara Chauniece and she has strong routes in gospel music, she felt a very spiritual connection with CeeLo and is glad to work with him. She has realized that she can do more then just gospel music; her church is also supporting her very well and will be performing “I Will Survive”. Tamara is really happy about the song choice and is ready to amaze the coaches.

Adam says that CeeLo is so great with the song choices, he believes it was her strongest performance. Blake says that it’s amazing how good everyone is; he believes she looks so beautiful and she nailed that song perfectly. CeeLo says he loves having her do such a classic song, he is so proud of how she did the song such great justice.

Next up is Kat Robichaud and couldn’t believe all of the judges turned for her, she is a rocker at heart and is glad CeeLo understands her. Kat will be singing “You Keep Me warm” and CeeLo believes that she is going to show herself on stage with this song; she is dedicating this song to her husband who is so supportive of her.

Adam says that it was awesome and he is such a big fan of her. Christina says she appreciates what she did but wanted a little more from her to go higher on the notes; but over all she loved how passionate she was with the song. CeeLo says that she did a great job.

Next up is Caroline Pennel, she is so happy to have auditioned and it has really made her feel more confident; she loves being with CeeLo. She never thought she would get this far; Caroline is getting a lot of attention and she is appreciative of what CeeLo has done for her. Caroline fines it’s hard to but her own twist on the song but enjoys it, CeeLo wants her to charm the viewers with her sweetness.

Adam says he is so happy right now and feels her voice is purely beautiful, he has such a unique sound and loved how great she was. Blake says that he doesn’t know what it is but her could be getting an amputation and heard her singing he’d be thinking of cotton candy, she could sing about killing people and skip around in glee. CeeLo says that Caroline is so wonderful, he is often trying to find the best balance between the music and her voice; he really loved it very much.

Next up is team Christina and kicking it off is Josh Logan, he was a father at a young age and is glad he found the chance to to pursue his love for music. He wants a career and is glad to have gotten this chance; she gave him one of CeeLo’s song and is impressed with how professional he is with it.

CeeLo says that when he was singing it he felt shy, he is flattered that he sang that song and was honored to have him sing it; thinking he did a great job. Adam says he’s a huge fan and seeing him evolve throughout the competition and that he can do anything vocally; he felt a little overwhelmed and to be a bit scaled back. Christina says that she is so excited and that he did a great job, she liked how original it was and unique the way he performed it.

Next up is Olivia Henken and the blind auditions was the biggest thing she has ever done; she was happy to have get to be on Christina’s team. She signed a guitar at a Hard Rock cafe and will be singing “Roar” by Katie Perry. Christina wants her to be tender with it and tell the story really well; Christina says she is going to own the stage.

Blake says he is surprised with how well a country voice sounded on that song; he wishes he could say something bad about it but he can’t even say anything bad. Christina says that she did her so proud, the way she recreated the pop song as her own was huge and is happy with how great she was.

Next up is Stephanie Anne Johnson who Christina stole back from CeeLo; Christina chose her the song “Georgia On My Mind”. Stephanie has a lot of support from her family; especially from her step dad who has lung cancer and she really wants him to hear her sing this song.

CeeLo says that he has mixed emotions; he’s amazed, jealous and just impressed. He felt it was a whole different version of herself, he really messed up with not having her. Adam says that he liked it, the song is something he respects so much and would not be able to sing it himself; he is so impressed and even got a little tear with the opening note. Christina says that she did wonderful and noticed how she broke up the melody in the beginning and that her voice has a unique quality.

Next up is Matthew Schuler for team for team Christina, she gave him the song Wrecking Ball by Miley Cyrus wanting to see his twist on a pop star.
dam felt like his heart just broke with how great he did that song; he’s kind of angry with how he isn’t on his team and he is the one to beat in this competition.

Blake tells his team that Matthew is the man too beat, he is just so impressed with how good he was. Christina says that the audience was going crazy for him, he always bring such charisma and his emotion is just perfect.

Last up tonight is the youngest artist Jaquie Lee, she use to be a normal girl who just sang for fun but really had the passion for it in the years to come. She loves being with Christina and write down everything that inspires her; she is singing “I Put A Spell On You”.

CeeLo says that she is just the absolute best; she is most certainly the future. Adam says making CeeLo vicious to win this competition and that she was amazing and can’t believe she is sixteen years old. Christina says that at this point she has grown so much and she is just honored to be her coach and see how much more she will grow in this competition.