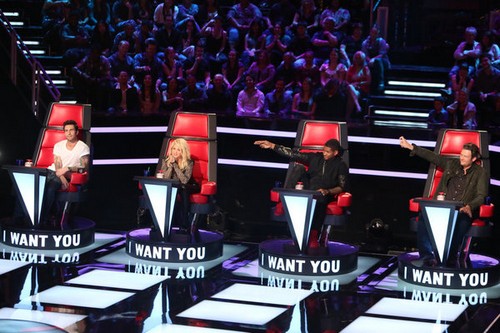 Tonight on NBC  THE VOICE returns with the strongest vocalists from across the country invited to compete in the blockbuster vocal competition show’s fourth season. Celebrity musician coaches Adam Levine and Blake Shelton return along with new coaches, Usher and Shakira, while Carson Daly continues to serve as host and Christina Milian as social media correspondent.

On tonight’s show iIn the season premiere, the “blind auditions” are held in front of a celebrity panel of coaches including, Adam Levine, Blake Shelton, Shakira and Usher. The strongest vocalists from across the country compete to be selected by one of the coaches and fight for a chance to win the title of being named “The Voice.” Christina Milian (“Be Cool”) serves as Social Media Correspondent and Carson Daly (“Last Call with Carson Daly”) hosts.

During the blind auditions, the decisions from the musician coaches are based solely on voice and not on looks. The coaches hear the artists perform, but they don’t get to see them — thanks to rotating chairs. If a coach is impressed by the artist’s voice, he/she pushes a button to select the artist for his/her team.

Tonight’s “Season 4 premiere” is going to be an exciting one, which you won’t want to miss. So be sure to tune in for our live coverage of NBC’s The Voice – tonight at 8PM EST!   While you wait for our recap, hit the comments and let us know how excited you are for the new season of The Voice.  To see a sneak peek  of the new season go HERE!