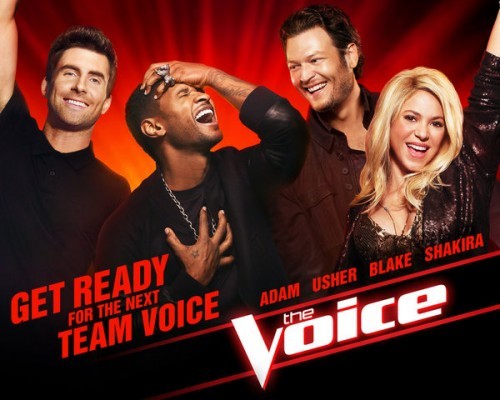 THE VOICE returns to NBC tonight with a whole new episode.  The final battles are waged as the coaches, Shakira, Blake, Usher and Adam trim their teams to just eight artists. Did you watch last night’s episodes? We did and we recapped it here for you.

On last night’s show the artists went all-out in head-to-head competitions.  The coaches were on the home stretch of winnowing their rosters down to size.   It was a night of memorable battles.  What did you guys think of last night’s battles?  Who are you most looking forward to seeing tomorrow tonight?

On tonight’s final battle round , Shakira, Usher, Adam and Blake will each have eight artists – six from their original picks and two additional via steal. Tonight, 12 more artists will pair up in showdowns, with a trip to the knockout rounds on the line.

The “knockout rounds” begin with the coache’s eight strongest team members remaining from the battle rounds. In this phase of the competition the coaches pit two of their own team members against each other, but this time they find out only minutes before performing who they are up against.

Tonight’s  The Voice “Season 4  The Battles Part 4”  is going to be an exciting one, which you won’t want to miss. So be sure to tune in for our live coverage of NBC’s The Voice – tonight at 8PM EST!   While you wait for our recap, hit the comments and let us know how excited you are for the new season of The Voice.

RECAP: It’s the final night of battles, Shakira’s team is up with Brandon Roush vs. Shawna P. and they are singing “A Piece Of My Heart”. Shawna has a lot of experience, this will be a tough battle for Brandon. Shakira gives her team pointers, Brandon really needs to take her advice if he is going to win this thing.

Adam thought it was fine and they were both badass. Blake thinks Brandon looks like Sean Penn. Usher loved Brandon’s Joe Cocker voice, he loved both though. Shakira thought Brandon gave a hundred fifty percent, this is a tough decision. The winner of this battle is Shawna.

Time for two of Adam’s team mates to battle against each other, it is Duncan Kamakana vs. Sarah Simmons. During practice, Adam sees problems with the harmonizing and suggests they spend more time practicing to nail the harmonies.

Blake loved the performance and Sarah is one of his favorite singers, he thought it was just beautiful, he would pick Sarah. Usher thinks Duncan has a confidence that drives women crazy and Sarah woke up the room. Adam is so proud of the two, he agrees with Usher that Duncan has a thing. Adam has to make a decision, he picks Sarah.

Team Shakira is next with Mary Miranda vs. Cathia singing a song that Shakira wrote about a broke up. Mary is having problems because she has never heard the song before, while Cathia is doing very well. Joel Madden feels for Mary, but she needs to pick it up or Cathia is going to take this win.

Adam thought it was beautiful even though he didn’t understand any of it, he would pick Mary. Blake didn’t know what they were singing either but he jokes that he thinks it was about him – he loved every minute, Cathia blew him away the most. Usher thought they did incredible. It all comes up to what Shakira wants, she picks Mary. Cathia exits the stage and Usher steals her, tears of disappointed soon become tears of excitement. Usher was sold at the end of the performance.