BY Dorothy Gale on May 8, 2013 | Comments: one comment
Related : Reality TV, Recap, Television, The Voice 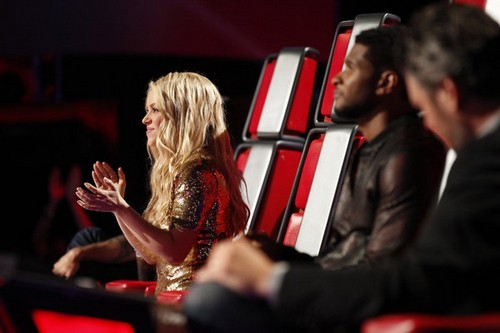 THE VOICE returns to NBC tonight with a whole new episode called. “The live Play-offs, Results.”  On tonight’s show it is the final night of Live Play-offs and the final 12 will be revealed. Did you watch last night’s episodes? We did and we recapped it for you here.

On last night’s episode the Live Playoffs continued as the remaining top artists performed live in front of celebrity coaches Adam Levine, Blake Shelton, Shakira and Usher for America’s vote.  With the polls closed on those performances, our attention turned to Blake and Shakira.

On tonight’s show America’s vote will put through the top two artists from each team and the coaches will each save one leaving them to move on to the next phase of the competition.

Former coach Cee Lo Green will return to “The Voice” stage to perform his new song “Only You.”  Rod Stewart will also perform and he will perform material from his upcoming album, “Time.”

Tonight’s  The Voice “Season 4  The Live Play-Offs, Results”  is going to be an exciting one, which you won’t want to miss. So be sure to tune in for our live coverage of NBC’s The Voice – tonight at 8PM EST!   While you wait for our recap, hit the comments and let us know how excited you are for the new season of The Voice.

RECAP: Team Blake and Team Shakira open up the show singing “Hall of Fame”. Team Blake gives a look back at the awesome performances by their team last night. It is time to reveal which artists receive the most votes and were saved by America.  The first artist saved is Holly Tucker, the second is Danielle Bradbery. Here comes the tough part, Blake can only pick one artist to move forward, he picks The Swon Brothers. Justin Rivers is going home, his time on The Voice has come to an end.

Cee Lo Green is back with Juliet Simms performing “Only You”.

Now it’s a look back at the amazing performances by Team Shakira last night. It’s time to reveal the two artists that were saved by America’s votes, Sasha Allen is the first and the second is Kris Thomas; both these artists are moving on to the live shows. Shakira has to decide who she is going to save, she admits this is really heard and her heart is breaking. Shakira keeps talking and talking, in the end she saves Garrett Gardner because she feels like she can still help him. Karina Iglesias is going home, her time on The Voice has come to an end.

Team Adam and Team Usher join on stage to perform “Don’t Worry Child”. A look back at Team Usher’s performances last night. Time to find out who America saved, it is Michelle Chamuel and VEDO. Usher has to choose who to send home and end their The Voice journey. Usher still thinks the two will have careers, but he still has to make a decision on who is going to save, it is Josiah Hawley. Cathia is on her way home, her journey is over.

A look back now at Team Adam’s performance from last night and then it is time to find out their fate. America has saved Judith Hill and she is clearly shocked. America also saves Amber Carrington. Adam has a tough decision as he has to choose to save one artist, he chooses Sarah Simmons. Caroline Glaser is heading home and has lost her chance at being the winner of The Voice.

Check out Rod Stewart below tonight on The Voice