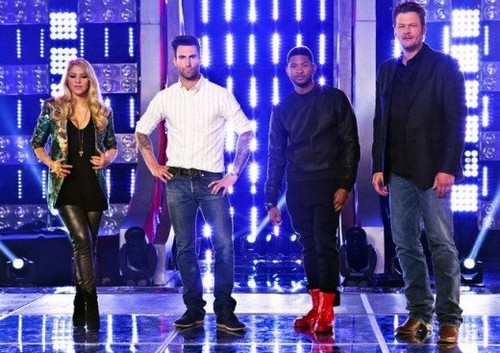 We are down to the top 6 contestants on this season of THE VOICE and the remaining six artists sing for their survival as your votes decide who moves ahead and who heads home.   Did you watch last week’s episodes where two contestants were sent home? We did and we recapped it for you here.

On last week’s show the top 8, Amber Carrington, Danielle Bradbery, Judith Hill, Michelle Chamuel, Sarah Simons, Holly Tucker, Sasha Allen and The Swon Brothers gave do-or-die performances to get a place in the top 6.  But before they sang we were treated to a solo performance from Blake Shelton, he sang his latest single, “Boys ‘Round Here.”  On the results show Judith Hill (Team Adam) and Sarah Simmons (Team Adam) were sent home.

On tonight’s show the top six artists perform live in front of coaches Adam Levine, Blake Shelton, Shakira and Usher for America’s vote.   On tonight’s episode the artists will sing two songs, making the pressure even more intense. The artists know they have to bring their A game tonight if they want to get a spot in the semi-finals.  Who are you rooting for?  Is your favorite still around?

Tonight’s  The Voice “Live Top 6 Performances”  is going to be an exciting one, which you won’t want to miss. So be sure to tune in for our live coverage of NBC’s The Voice – tonight at 8PM EST!   While you wait for our recap, hit the comments and let us know how excited you are for the new season of The Voice.

Holly
Beginning with Blake’s choice, a Martina McBride song, performed by Holly Tucker. Usher enjoyed the theatrics but he did want to see more even though it was a “pretty good” performance. Shakira and Adam don’t add anything critical. While her mentor, after being thanked for his Oklahoma tribute, can sing nothing but praise for Holly.

Her second song, again county but this time with an acapella and violin accompany twist, is called consistent by Shakira, diverse by Adam, and strong by Blake.

Michelle
Usher chose “Somewhere Only We Know” by Keenan for Michelle. Shakira actually hands praise to Usher for Michelle’s performance because of how far the artist came vocally.

Prepping for her second song, a Taylor Swift, Michelle is surprised by a visit from Taylor herself. Taylor enjoys Michelle’s rendition and that seal of approval gives her a that extra boast of confidence.

The Swon Brothers
The brothers perform a guitar and vocal country duet. Carson asks for Shakira’s take on the boys duet and after more “umms” she eventually replies in her broken English that she enjoyed it. Adam loved that both the music and back up dancers kept the song but also entertaining.

Their second song, also country song, about weirdly enough drugs. “Okie from Mistokie”. Who can’t enjoy a song about getting high is what the judges are going with.

Sasha Allen
Prior to performance, Sasha was the first one that needed to be tweaked by her mentor. Shakira had asked for her more power in Sasha’s vocals. Later her soulful Aretha performance gets a “wow” from Carson before he question Adam on how he felt to let Sasha go from his team. Adam calls himself a fool and congratulates Sasha for her best performance yet.

Trading soul for country; Sasha’s second song is Carrie Underwood. She makes the song dramatic and Blake can’t help but to keep referencing when she ripped her dress off.

Danielle
“Shake the Sugar Tree” a slower country song performed by Danielle received a standing ovation from proud papa Blake. On the other hand felt that at one point she was a little nervous he does applaud her performance. Danielle was another artist Adam missed out on getting her on his team.

There are already hiccups in Danielle’s second song choice. During rehearsal she kept getting pitchy and Blake was fearful the song would be too ambitious for the young singer. A Sara Evans song. Nonetheless she is able to not only make it through the song ok but also receive praise

Amber
Amber has to perform a Skid Row song. A group she’s never even heard about but she does a good job. Out of all the performers she was the only one to step out of the vocal box. Adam actually gets heartfelt when he told her how incredible she was.

Keeping up her versatility, she chose Patsy Kline’s “Crazy” as her song. Adam can’t wait to see Blake’s face but he does warn Amber not to keep pushing the mike away from herself during the song.

Blake admits he has some misgivings when he heard Patsy but thought Amber did good with the song.

There seems to be the pattern of the night. Everyone Adam missed out on is doing great and Usher can find fault where no one else can. The night ends with all contestants still hopeful although what tomorrow brings is a mystery.