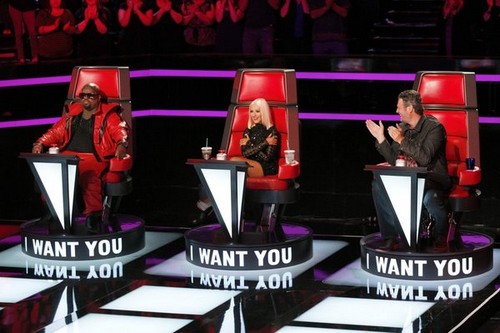 Tonight on NBC our favorite reality show THE VOICE continued for another new episode and the third auditions of the fifth season.  On tonight’s show as the auditions continue, CeeLo, Xtina, Adam and Blake fight for the brightest new artists.  Did you watch last week’s episode?  We did and we recapped it right here for you.

On last night’s show  the Voice continued its premiere week by simply following the formula that took them to the top: find extraordinary singers and put them in the spotlight where superstar coaches can fight over them. Flush with an Emmy Award for Best Reality Show, Coaches CeeLo, Christina, Adam and Blake talked backstage about how quickly and comfortably they’ve settled in to Season 2; Blake acknowledged that they’re all gunning for him now.

On tonight’s show the “blind auditions” continue and are held in front of a celebrity panel of coaches including, Adam Levine, Blake Shelton, CeeLo Green and Christina Aguilera. The strongest vocalists from across the country compete to be selected by one of the coaches and fight for a chance to win the title of being named “The Voice.”

Tonight’s  The Voice “The Blind Auditions, Part 3”  is going to be an exciting one, which you won’t want to miss. So be sure to tune in for our live coverage of NBC’s The Voice – tonight at 8 PM EST!   While you wait for our recap, hit the comments and let us know how excited you are about the new season of The Voice.

RECAP: First up to audition tonight is Ray Boudreaux who is a single dad that loved to sing and perform when he was younger; when his daughter was born it was hard to do gigs. He mows lawns to this day to make money and and appreciates the time he has with his daughter; he loves her singing all the time. To be here on The Voice was the first time he ever went on a plane to get to audition; the song he’ll sing will shock the judges. Ray is singing “Use Me”.

Blake turns around, really fast. CeeLo hit his button and challenges Blake. Adam says that he looks like Blake but sounds like CeeLo, Adam believes he’s better looking than Blake and loves his voice. Adam felt there were big gaps in the song; CeeLo says that he did such a good job and loved the soul believing they are cut from the same cloth. Blake says he would buy a ticket to his concert. Ray goes and picks Blake to be his coach. Blake gets up and does a little dance and gives Ray a hug.

Next up is Lina Gaudenzi and her mother was a model who did the first Victoria’s Secret catalog; she did some modelling when she was younger but gained weight in high school and stopped being a model. She moved to paris and started singing in cafe’s but going there made her believe this is what she wants to do. Lina is singing “Landslide” Christina hits her button and turns around. Blake then hits his button near the end.

Blake says he was sold at the end of performance and beleives it was great, Christina asks what her genre is and says she’s into blues and folk. Christina says that the two of them can figure out where she wants to go; Blake believes she should join with him and says he only speaks winning. Adam says that Christina would be great for her as a coach. Lina goes ahead and picks Christina to be her coach; Lina walks down and hugs Christina.

Next up on to audition on The Voice is Juhi and she is 16; she has above a 4. GPA and is a big fan of rock music. She always records at home and isn’t sure what she wants to do in her future but if this goes well her parents are all down for her heading into a musical career. Christina hits her button and so does CeeLo.

CeeLo says she sounded great and loved the way she sang the song; Adam is shocked hearing she is only 16. CeeLo loved how unique her voice is, it was very fun and effortless. Christina says that she would love to coach her along the way and because they’re both females it will go better. Juhi goes ahead and picks CeeLo as her coach.

Next up is Malford Milligan from Texas, he grew up in a poor family and worked in the cotton fields most of his life as a kid and he’s a black albino; he’s also legally blind. He was the only albino child at his all black school and was picked on so much; he went ahead and started singing. He’s nervous with all the gifted people and is glad the auditions is blind; he is most worry about how he looks.

Nobody hits their button for Malford; Adam says it was a great rendition and loved his singing. CeeLo says he closed his eyes and fell into a trance; it was so amazing and sounded so classic. Blake says that he should go make a record to buy it.

We now see a complication of singers who just did not get a turn from the judges.

Next up is Justin Blake from Tennesse and is an escort driver that drives behind 18 wheelers making sure they get to their destinations; his girlfriend had just recently got pregnant nad doesn’t have much money for a family and hopes this show helps him. He’s going to sing a song by Blake. Adam turns around for Justin.

Adam turned around because he really liked his singing; an amazing country singer to be exact. Blake says it was a great song and a lot of nerve to do one of his own; Adam and Christina had no idea it was one of his. Blake says he gives him his respect and Adam loves his pitch; he handed him over to Adam. Adam gets up and gives Justin a hug.

The next one coming up is Timyra-Joi and she is 15 years old, her parents said she has been singing for several years and is super supportive of her in having a career for music. Her vocal teacher really helped her family and let them stay with her when they were having a hard time financially. Tamyra believes this is the perfect opportunity to help her family. Timrya is singing “This Girls On Fire” Christina turned right away.

Right at the end Blake and CeeLo turn around.

The judges or so shocked at her age, Christina mentioned that she was way first and believed she just nailed that song. Adam calls her an unpolished diamond and believes Christina would be the best for her, Christina says she started off really young and believes she can help her. CeeLo says he wants to figure out where she wants to go in her journey. Blake says that he has won this competition last year with a 16 year-old girl. Timyra chooses Christina to be her coach; Christina gets up and hugs Timyra.

Next up is Monika Leigh who is 28 years old and when she was 13 to 21 she started doing gigs and stopped at a point because she just didn’t feel like she could ever really make it as a professional. She works at a hotel right now but really wants to just sing; when she saw the opportunity to audition she decided she had to do it. Monika is singing “The Thrill Is Gone”.

Adam and CeeLo hit their buttons at the same time and turn round for Monika. Blake also turns around.
[9:16:56 PM] Chris: Blake wants to build his team around her and Adam says she sounded so pure, it was a subtle and beautiful voice. CeeLo says she sounded so cool and very embracing of the song. Blake says then says early on in her performance it was something that he would listen to in the radio; it was star quality. Blake then takes out his three trophies that he won in a row. Monika then picks Blake.

Next up is Zack Hinson who is a firefighter, he started when he was in high school. He had a happy life being a firefighter but believes music will make him much more happy; he really wants to be coached by any of the coaches. Zack is singing “Drunk On You”

Nobody turns for Zack, Christina wants to see what’s under his cowboy hat and calls him a cutie pie; she is very impressed with him. Blake says he really worked hard on that song and says he should have developed the notes then the little growl; Adam said he took some risks that didn’t quite hit home but that he should come back again.

Next up the next artist is Briana Cuoco who is an assistant for her celebrity sister Kaley Cuoco and is ready to step in the spot light. Briana is so happy to finally get her chance and loves having her sister and parents watching her there. Briana is singing “You And I”.

Christina hits her button and turns around. Briana sits down shocked and even CeeLo turned around; Christina says her subtle vocals were nice but the raw talent in her voice moved her. Blake says it was a great pitch and CeeLo has no chance. CeeLo says he felt power in her voice that Christina heard; he loves her powerful voice. Briana chooses Christina; Christina goes up and hugs Briana.

Next up is George Horga and his family is from Romania and they were really poor but have made a success here in America; George moved to Hollywood at 18 for the sake of making it to music. His family completely supports him with his choice of a career.

George is singing “Treasure”. CeeLo turns around. CeeLo likes his charm and personality; Adam says that the choice of song was great and perfect for being with CeeLo. Christina says that when the beat kick in and the girls jumping up she knew he was cute; she believes CeeLo is the best for him.

The last audition of the night is Preston Pohl and he is from Texas; music is something that has always been with him. He played guitar for a Christian rock band; his friend played bass and he passed away. He took a year off from music but his friend Ron would have wanted him to keep going so he’s here at The Voice.

Preston is singing “Electric Feel and off the bat CeeLo, Blake and Adam hit their buttons.

CeeLo says he did one of his favorite songs of all time and did it justice, Adam tells him he will do anything for him to be his coach. Blake says that he knows many artists come from Texas; Christina says that CeeLo and Preston are made for each other. Adam says he’s going to be angry if he does not get him on his team. Preston chooses Adam to be his coach and Adam gets up to hug him; calling him a major badass.