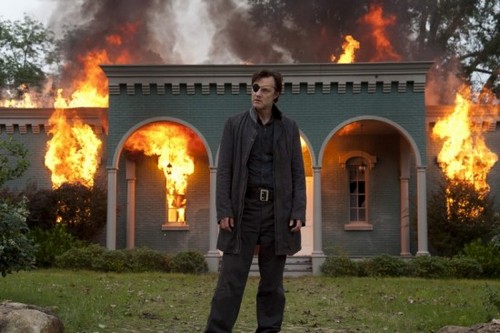 Tonight on AMC THE WALKING DEAD continues with all its gory goodness. Tonight’s episode is called, “Live Bait” and on tonight’s show a familiar face returns as the group members struggles to find humanity. If you happened to miss the last episode, don’t worry. We’ve got you covered. Click here for a full recap of the last episode to find out what you missed!

On last week’s show Glenn got really sick tonight and we thought he was a goner, but he was saved by Maggie.  Hershel killed many sick people who turned into zombies.  The drugs worked, everyone was cured and Carl said remarked all is okay now. Famous last words!  At the end of the show the camera pans into the forest and who is there, but the Governor.  He is back.

On tonight’s show Michonne is still angry at the Governor, but the trail has gone dead, but it is about to get hot, literally.   The Governor is coming back and we know it is going to be a great episode.  We will meet three new characters next week Don, a grandfather and sometimes grumpy, Laura is a single mom and ex-nurse and Melody a single girl in her 20s.

Tonight’s The Walking Dead Season 4 episode 6 is going to be exciting, and you won’t want to miss it. So be sure to tune in for our live coverage of the new episode of The Walking Dead — tonight at 9PM EST! While you wait for our recap, hit the comments and let us know how know how excited your are for the new season of TWD and what are you hoping will happen this season. Check out a sneak peek of The Walking Dead “Isolation” below! Don’t forget to come back at 9PM.

RECAP: The episode starts off with a zombie walking up to The Governor and some shoots it after it falls into the fire; but the Governor keeps looking forward. It’s now morning and the Governor gets out of his tent and gets in to a truck driving around. He burns down a big building and just watches the walkers roaming around; he’s been on the road by himself for several months. The Governor now has a beard and long shaggy hair; he just keeps walking down a road and notices someone in a window looking at him. The Governor goes over to her house and is now looking around with a flash light. A woman with a base ball bat is at the door; but then another girl comes at him with a pistol. The Governor throws his gun at them and his all that he’s carrying.

The girls tell them that they have been hiding since this disaster happened and wonder if he plans on staying in the building; The Governor isn’t answering them but after they get pissed off he tells them it’s just for the night. One of the girls threaten to kill him if he dares to do anything; they say they will hold on to his gun till he leaves for safety. They ask for his name and replies that it’s Brian Harriott; the Governor is in a room and gets a knock at his door; the girl offers him something to eat. The Governor accepts it and then tells her thank you.; he then goes to his window and throws the food into the grass. The Governor then starts eating his own canned food. The family on another floor hear someone at their door; The Governor is outside their door and the youngest girl Terra points a gun at him. They then welcome him inside and offer him coffee, The Governor sits down on a chair and notices himself in the screen of the TV; the elderly man asks him for a cigarette but The Governor ignores him. They offer him food but The Governor ignores it and just listens to them talking, they have a truck full of food. Lilly the older woman asks the Governor to help the elderly man; The Governor walks over and picks him and puts him on a bed. The elderly man mentions how the walkers just keep getting back up and asks if The Governor has kids; The Governor tells him that his child was what made him a man. The old man tells him to go and get a game that one of his friends had on another floor because he can’t do it himself.

The governor goes into a room with his flash light and starts looking around; he takes a look under a bed and finds a what the elderly man asked for.The Governor hears a sound and finds a wheelchair in the bath room; he notices some blood behind a curtain and pulls it over. He finds a walker sitting inside the tub and the Governor stabs it in the head and takes the pistol the corpse had on it.

The Governor comes back with the board the elderly man asked for and the two shake hands; Lilly thanks him and The Governor says she is welcomed. The Governor goes back to his room and finds a picture of himself, his wife and his daughter; he folds the picture of himself over and goes to sleep. Lilly comes in and the Governor wakes up fast and hides his picture away. Lilly offers him somethings for the road but he says he is fine; she throws the bag to him and gives back his gun. The Governor tells her to keep the gun and not to throw it at him; she says it’s his but he shows her that he already has another gun. The Governor says he found it upstairs and has no use for his gun; he also tells them they need to shoot the walkers in the head to kills them. Lilly tells him that her father has lung cancer and has two days of oxygen left; she mentions there is an old folks home close by and even one tank would b enough for them. The Governor heads outside with his new gun in hand; The Governor enter the old folks home. The Governor is looking around with his flash light; he finds a walker strapped to a bed but ignores it. He finds one in a wheel chair that can’t stand up; he just passes by it. The Governor finds one coming at him but shuts the door in its face, he finds a massive supply of oxygen tanks; at least over ten of them. He starts getting swarmed by walkers and runs out with one having lost the big haul.

The Governor comes back with a tank full and gives it to the family; he heads to his room and sits there. Lilly comes to say thank you and tells him to sit, she wants to be his nurse for today.The Governor sits down and she starts taking care of the wound on his head. Lilly mentions her little girl Megan thought that he was her dad; Lilly explains he went out three years ago but never came back home. Megan comes in and Lily explains that it’s all fine and should watch over the Governor until she comes back. Megan asks about his eye and the Governor tells her it’s gone; he explains something happened to him. Megan wonders if it’s bad to ask, The Governor tells her it’s fine and tells her he will tell her what happened to his eye. The Governor and Megan pinkie swear that she won’t tell anyone else. The Governor says that he is a pirate and Megan doesn’t believe him; he mentions he was trying to help someone he loved a lot but got hurt instead. Megan wonders if they got hurt too and he says that the person did; Megan tells him sorry.

The Governor is playing chess band Megan says it looks hard; The Governor has shaved off his beard and the Megan questions him about the chess pieces. Megan grabs the king piece and gives him an eye patch; The Governor takes it and offers to play a game with her. Lilly comes into the room and brings Megan to see her grandfather who is dead; he’s been dead a while and The Governor tells them all to get out. The grandfather comes back as a walker and The Governor bashes his head in with an oxygen tank; he then goes outside and starts digging a grave. Lily comes over and helps place her father into the grave. The Governor comes back but Megan is now scared of him; Lily goes over and hugs Megan. Terra says that it happens no matter what, The Governor says he is sorry. The Governor then leaves their room and heads to his own; he takes a match and starts burning the picture of his family and throws it out the window. The Governor has all his gear with him and tells Lily goodbye; Lily offers to allow them to go with him. The Governor says he can’t take them but she says that they already are with him.