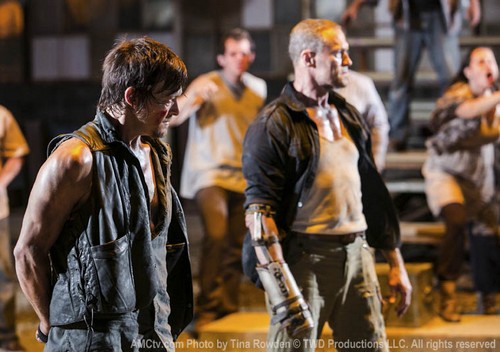 Finally after a long holiday hiatus THE WALKING DEAD is returning with it’s Winter Premiere!  Are you excited?  AMC has been teasing us with several sneak peeks of tonight’s episode called, “The Suicide King.”  On tonight’s show picking up where we left off before the break, After the invasion of Woodbury by Rick’s group, Daryl and Merle are captured by The Governor. Rick decides the fate of Tyreese’s group.  Did you watch the last episode before the break?  We did and we recapped it here for you!

To jog your memory where we left Rick and the gang the Governor wanted to get rid of Maggie and Glenn because the longer they were at Woodbury the stronger the chances are that Andrea would find out about them. Daryl had mixed emotions when they stormed Woodbury, Rick needed him but his feelings for his brother were getting in the way.  Michonne found someone behind a mask, hands bounded and in a closet; It was Penny, the Governor’s daughter who turned into a walker – the cat was out of the bag!

Tonight’s episode will serve as a jumping off point for the rest of the season, which is sure to witness drastic change ups.  Glen Mazzara promised that he would more than likely be killing off a character before he leaves his post as showrunner, and people and critics can’t help but wonder which character will be eaten and done with for goodsies.

On tonight’s show Andrea is in the arena and she recognizes Daryl, when she pleads with the Governor to save his life because he is her friend, he tells her that it is not up to him anymore. 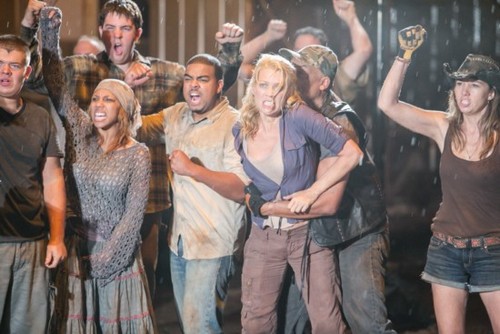 There are going to be major power struggles in this upcoming episode, and positions that have long been established in this new order of things just might falter from their seats of power.  War is also on the horizon, and it’s definitely not going to be pretty and/or delicate. The Governor is coming to the prison, and the prisoners state: if he wants a war he’s going to get a war. Bold statements will be made. 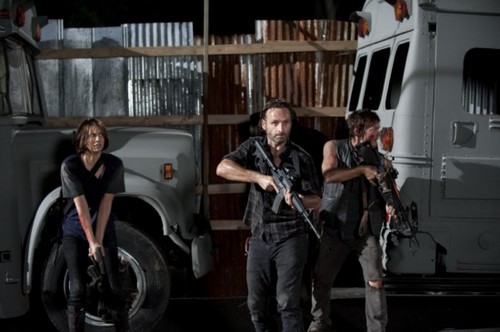 Let’s just hope our favorite band of survivors will be able to live up to their lofty statements. Will our friends in the prison be able to bring enough to the table to thwart the impending and inevitable attacks? What will happen to Rick?

RECAP: We continue tonight in the Woodbury pit, the two Dixon brothers pitted against each other and the town folks want to see their blood. Andrea tries to break it up and the Governor tells her to stay out of it, the people of Woodbury have spoken. He then tells her to prove her loyalty, she said she was loyal to him and Woodbury. Andrea begs him not to do this, while Daryl sneaks a peek at his brother and Merle takes his chance to beat his brother. Walkers are thrown into the fight and Merle gets close enough to Daryl to tell him, “little brother just follow my lead”. The Dixon brothers beat the walkers one by one, when all of sudden there is gun fire from Maggie overhead then explosions and everything goes to hell in a hand basket. We see Rick, gun drawn and shooting, while the two brothers escape among all the smoke and fire. The Governor just walks slowly through the debris with this sick and twisted look on his face, you know he’s going to get back at them and its going to be bad.

Merle and Daryl are with Rick and the group and along comes a walker, the one we were expecting , Hines Ward.  Little do the townspeople of Woodbury know, but their fence is broken and walkers are getting in.

Glenn is shocked and not happy to see Merle who makes his first few minutes back creepy as ever. Merle goes on to tell the group that Andrea is shacking up with the Governor when Rick has heard enough and knocks him out.

At the prison, Hershel stitches up one of the newbies, while the new inmates take interest in the baby. Tyrese and his people tell Hershel that they have been running for a long time and there used to be twenty five of them at one point.  Tyrese thanks Hershel for giving his group shelter. Hershel tells him not to get too comfortable, they are a much larger group and his doesn’t make the decisions.

Daryl warns Rick that the Governor is going to attack and he thinks they shoot bring Merle with them. Meanwhile, nobody is trusting Michonne either. Glenn doesn’t want Merle back and Daryl tells him that if there is no Merle, then there is no  him but Glenn is really worried about what Carol will think if Merle returns. Rick intervenes and Daryl tells him not to ask him to leave Merle, he already did that and will not do that again.

Daryl sets off with his brother and leaves Rick with Glenn, Maggie and Michonne but he makes it clear to Michonne that they are going to patch her up and then he wants her gone.

At the prison, there is a burial for one of their fallen, Donna, in Tyrese’s group when they see Carol and Carl alone and want to take them over, but Tyrese is against it and tells them that this is not what they are about.

Rick, Maggie and Glenn come to pickup truck that is blocking the road and when Glenn opens the door, a walker comes out and Glenn crushes his skull with his foot. Glenn is upset about the whole Merle thing and screams at Rick, all that effort, all the risks they took and Daryl leaves with Merle. Rick tells him that it is the hand they have been dealt, Maggie tries to talk sense to both of them, but they are both thinking differently about Daryl’s leaving with his brother.

In Woodbury, the town is going crazy, Andrea is trying to calm down the people when all of a sudden some of the people are attacked by walkers, the people didn’t realize that they were loose in the town. One person was attacked and is barely alive but suffering, Andrea begs someone to do something when the Governor walks out shoots him dead and goes back in.

At the prison, Carl and Carol are chatting when Rick, Maggie and Glenn return. Rick hugs his son and tells Carol that Daryl is alive, but gone off with his brother Merle. Carol is shocked, she can’t believe that Daryl left and wants to know if he is coming back. Carl asks abotu Oscar and Rick tells him that he didn’t make it.

The Governor is furious, Andrea walks in and tells him that he needs to speak to the people of Woodbury, they are scared but guess what, the Governor doesn’t care. He goes on to tell her that her friends killed six people and she is surprised to know that they are still alive. Andrea tells him not to drive her out and he tells her that she is just a visitor there, that is why he didn’t tell her about her friends.

Rick is alone with Hershel and he tells him about Daryl and Merle pitted against each and the sick minded Governor did it.

Carl is inside the prison and staring down Tyrese’s group when Rick and Hershel come inside. Beth brings the baby to Rick who picks her up as she begins to cry and he looks like he is going to go crazy.

All the town people are gathered and they want answers, Andrea tells them they have all suffered and they are never going to be the same, ever. She gives them a good pep talk, with the Governor listening in behind a curtain inside his apartment.

Beth is taking care of the baby and Carol tells her that she is good at it. Beth tells Carol that she doesn’t understand why Daryl didn’t come back and Merle sounds like a jerk. Beth realizes that they are weak without Daryl, but Carol assures her that they now have Tyrese and his group, so they will be fine.

Hershel takes a look at Glenn’s wounds to make sure he is ok when Maggie walks past and gives them a look. Hershel gets up to leave, but first he lets Glenn know that he is happy he is ok, he is like his own son. Hershel then goes to see Maggie to see if she is ok, he asks her right out what happened between her and Glen, but she won’t say anything.

At the prison, Michonne is asleep and Rick just wants to know when Hershel thinks she can travel, he wants her gone. The rest of the group walks in and they all realize that they are going to need reinforcements if they are going to fight the Governor. The group heads of to see Tyrese and he introduces Rick to Sasha, Alan and Ben. Tyrese assures Rick that they will do anything they can to contribute, to prove that they want to be on their side but Rick wants nothing to do with it. Tyrese tells Rick that if he turns them out, then he is responsible for what happens to them. Hershel wants these four on their side and tells Rick that he is wrong, he has to start giving people a chance. All of a sudden Rick looks up and he sees Lori in a white dress looking down at him, he asks why she is there and everybody looks at him and wonders what the heck is going on, he screams at her to go and everyone thinks he is screaming at Tyrese and his group and Glenn gets them out of the room.