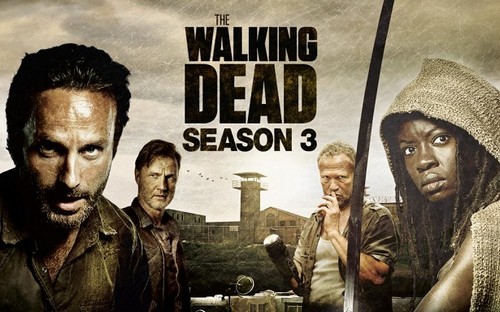 THE WALKING DEAD keeps getting better and better week after week.  It is now my favorite show on television, how about you?  From the preview we have seen, next week’s episode of The Walking Dead called “I Ain’t A Judas,” is going to be an explosive one and, as usual, we will be providing you with the juiciest, previews and teasers out there.

On tonight’s show if you did not hate the Governor before, you have to really hate him now.  Rick is having hallucinations, He sees a women in a white dress in the distance and approaching the women we can see that is Lori in her wedding dress. She touches his face, Rick smile and then kiss her.  So Rick is till all kind of crazy.  The governor comes to see Andrea and admits he has done some terrible things and he wants Andrea to lead the people of the city.  Unbeknownst to Andrea the governors and his men attacked the prison – it is a show of force by the Governor.  The governor shot Axel and Carol hides under his body.  Rick was stuck outside the prison.  A van broke through the gates and it released a bomb of walkers – the shooting also brought walkers to where Rick is and Rick was pinned down.  Daryl and Merle come to the rescue.  What an episode!  Did you watch tonight’s episode?  We did and we recapped it here for you!

Spoiler alert: If you’re one of those people who doesn’t like spoilers, stop reading now! We have some juicy spoilers for you about the season 3 episode 11 of AMC’s “The Walking Dead.”

AMC Official Synopsis: “Rick and the group must make a choice when security is threatened; Andrea grows uneasy.”

On next week’s show it looks like it is going to be an explosive one, as they start to build towards what is going to happen this season, as an even bigger battle starts.

Security at the prison will be compromised and it looks like a lot of Zombies get in.  Last week Daryl and Merle returned to the prison just in time to save everyone.  Not surprising for Daryl to do this but I am surprised that Merle would.  Carol is not pleased that Merle is back and she lets Daryl know that Merle is not good for him.

Rick’s son Carl tells him that he should not be the leader anymore, he should step down.  Carl tells him he should let Hershel and Daryl take charge, he thinks his father needs a rest.  It looks like Rick takes Carl’s request to heart and is leaving.  Hershel tells him to get back and DO something!

Andrea feels uncomfortable now that Woodbury has become a police state.  Andrea tells the Governor that she is going to see her friends and the Governor tells her if she goes, she stays there.  It looks like Andrea does not listen to the Governor and she comes back to the prison.  The governor is worried, he feels that Andrea is very influential and people listen to her.

Things seem to be getting desperate in the prison, they are running out of food and ammo, they were totally unprepared for the attack!

The Walking Dead Season 3, Episode 11 “Ain’t A Judas” airs on AMC on February 24th, 2013. Check out the preview videos   from episode 11 below and let us know in the comments below what you think!