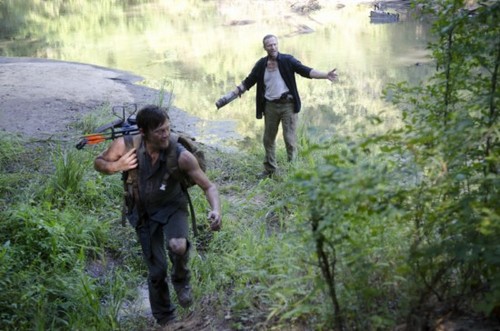 After a one long long wait THE WALKING DEAD returns with a whole new episode called, “Home.”  On tonight’s show as the group debates their next course of action, Rick wanders after a lost friend. Daryl and Merle question their choices. The Governor restores order in Woodbury and makes plans to punish those responsible.  Did you watch last week’s episode? We did and we recapped it here for you!

On last week’s show Andrea was in the arena and she recognized Daryl, she pleads with the Governor to save his life because he was her friend, he told her that it is not up to him anymore.

On tonight’s show it opens with Rick watching through his binoculars and seeing Michonne walking around the overturned bus on the yard of the prison. As he explores the area, he suddenly sees the woman in white dress standing over ​​the graves of his wife and friends. He runs toward the tombs to meet her. As Rick approach the woman, she’s suddenly gone. He looks around and sees her again, but this time, beyond the prison gates. He leaves the prison yard. Michonne watch him go outside and close the door behind him. Finally,after approaching the women we can see that is Lori in her wedding dress. She touches his face, Rick smile and then kiss her. Michonne looks at Rick standing there alone. Cue theme music begins. 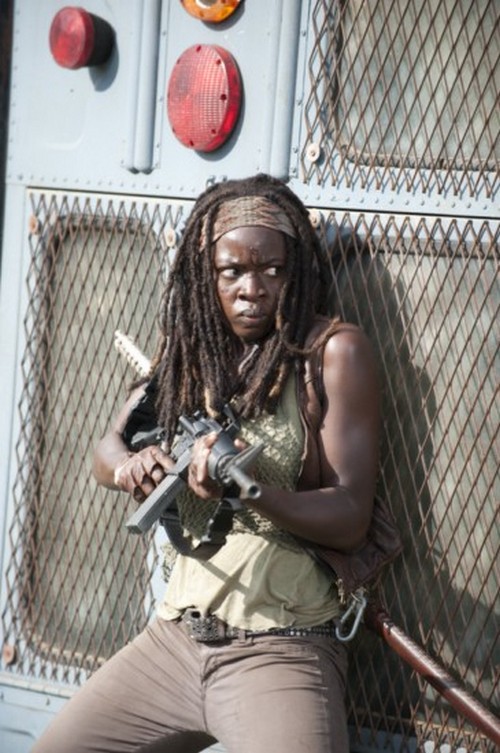 In Woodbury, Andrea sits quietly in her apartment when the governor calls the door. He says that her speech to the people is what they needed to hear. She asks about the prison and he says that as long as they do not disturb in the city, they are not being bothered. Andrea wants to see them. The governor changes the subject and says that he is not able to lead the people of the city at the moment, but tha tAndrea can. He wants her to lead the city.

RECAP: At the prison, everything seems quiet as Rick surveys the surrounding area with his binoculars. First he sees Michonne, then he sees Lori in a white dress standing near the graves.  When Rick goes over to see Lori, she switches position and she is now near the fence and walking. Rick runs to the gate, opens it and heads outside to see Lori. Rick doesn’t close the gate, but Michonne does. As Rick approaches Lori, she touches his face and he looks like a kid in a candy store that got the biggest piece all for himself. Meanwhile, Michonne watches on and can’t believe what she is seeing.

At Woodbury, Andrea has a knock at the door and its her boyfriend, the Governor who praises her for her speech to the people of Woodbury. Andrea wants to know if he is going to retaliate against the people at the prison and he says no, it wouldn’t give them anything. Andrea wants to go see her friends and he tells her that she is fit to leave if she wants to. The Governor claims to need time to get himself together and wants Andrea to fill in for her at Woodbury in the meantime. So, she can leave, but he is guilting her into staying at Woodbury.

In the woods, the Dixon brothers are all by themselves and Daryl seems to be getting restless and wants to go back to the prison because there is food and shelter there. Merle doesn’t want to go to the prison, he doesn’t think he will be made to feel welcome. Merle goes on to tell Daryl that the Governor is going to go after them and bury whats left of them.

Glenn and Carl figure out that there is another breach in the prison because how else could the other group have gotten there. Michonne warns that the Governor is coming and Glenn wants her to help him lead an attack on the Governor first. Hershel reminds Glenn of what happened the last time he ventured out of the prison walls. Glenn gives in, they will protect the prison while Hershel would prefer if they run.

At Woodbury the Governor has vanished and nobody will tell Andrea where he has gone. Milton is not good at lying and tells her that he is on a run for supplies.

Hershel is still talking about running and hiding, while Glenn wants to take Maggie with him to the far end of the prison to find out why security has been breached again. Glenn approaches Maggie, who is lying down and they start to talk – she reveals that she was not raped at Woodbury. Maggie tells him that she had a choice, she take off her shirt, or they were going to take off his hand in the other room. Maggie is furious with Glenn and I am wondering why…what am I missing here?

At the prison Axel is hitting on Carol and she doesn’t seem to mind.

The Dixon brothers are still wondering through the woods and they all of a sudden here screams, one is a baby. It turns out that there are people on a bridge being attacked by walkers and Daryl doesn’t think twice about going to help them, but Merle can’t be bothered.

Daryl is up the bridge and helping out the bet he can, he finds a women in a car with a baby and closes the trunk on a walker who is trying to get in and it is by far the gruesomest scene of the night, awesome!

The walkers are killed on the bridge and Merle shows the survivor his “bad guy” side and even pulls a gun on one of the survivors because he wants to root through the car that the women is inside of. Daryl aims at Merle and tells the people to get in the car and leave. The car leaves and runs over a walkers’ head. Merle can’t believe that Daryl aimed at him, the two get into a screaming match and they get into when Merle was left on the roof. The two continue screaming and Daryl calls Merle “a simpleminded piece of shit”. Daryl is leaving and Merle says he can’t follow him because of what he did to Michonne and the Chinese kid, Daryl corrects him, Glenn is Korean. Don’t you love Daryl?

Glenn is going out of the prison and Hershel offers to go with him, but Glenn tells him that he’s got it. Hershel tells him that his rage is going to get him killed but Glenn has a response for that, with Daryl gone and Rick losing his mind, he is the next in charge.

Inside the prison, Beth asks Maggie to help feed the baby. Back outside, Rick is running around searching for Lori’s ghost when Hershel arrives at the bottom of the fence, he tells Rick that Glenn is on a war path and he is reckless. Hershel goes on to say that they need Rick now more than ever and wants to know what he is doing beyond the gates. Rick says he needs time, he has “stuff” and doesn’t know how much longer he is going to be there. As Hershel is leaving, Rick tells him he saw something, Lori and although he knows that it is not really her, it has to mean something. Hershel asks if it was Lori on the phone too and he says yes. Rick goes on to say that he is waiting, there is an answer and he doesn’t know what it is. Hershel wants him to come back inside, to rest because it is not safe outside but Rick says he can’t and walks away.

Axel and Carol watch on and he tells her about his life in prison, how things were simple. Carol asks if he misses his brother and he tells her no, then all of a sudden Axel is shot dead, the Governor has arrived at the prison. Next, they take aim at Rick, Carl, Beth, Michonne and Hershel.

Maggie comes out of the prison with more guns, then all of a sudden everyone hears an oncoming vehicle, it’s a mail truck and it runs right through the prison gates. The back doors to the truck open and a truck load of walkers run out. Thanks to Maggie’s aim, the guy who was in the prison tower is shot dead. Rick has run out of ammo and is on his own, while Glenn has just returned to complete chaos. Rick has two walkers trying to take a bite out of him when Daryl and Merle come to the rescue.

It’s all over, the only casualty was Axel but Rick is behind the prison walls with Daryl and Merle with walkers keeping them away from the prison.