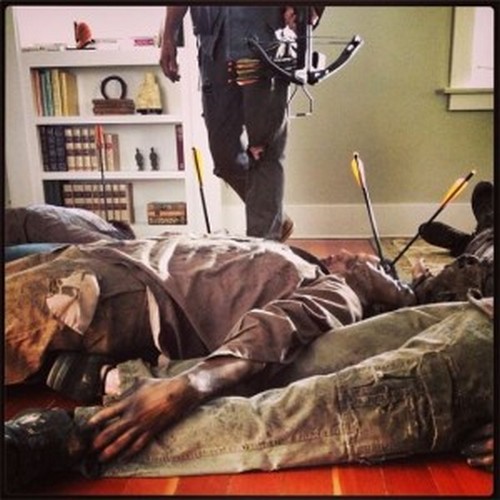 THE WALKING DEAD keeps getting better and better week after week. We are now in the second half of the season and episode 12 is said to be the most special and influential episode of the season. As usual, we will be providing you with the juiciest, previews and teasers out there.

On tonight’s show Andrea grew uneasy with the governor.  Andrea told the Governor that she is going to see her friends and the Governor tells her if she goes, she stays there.  Andrea does not listen to the Governor and she went to Milton for help to get out so she could go back to the prison.  Unbeknownst to Andrea Milton went behind her back and told the Governor who told Milton to let her out.  Andrea get to the prison and tries to convince Rick and the gang to go to Woodbury.  She warns them Philip is going to come after them and he has a town behind him.

Carol was very happy that Daryl was back and she let him know.  She was just concerned that Merle  might influence Daryl and change him back to what he was.  We also got to see the Governor without his eye patch and it was gruesome.  Did you watch tonight’s episode? We did and we recapped it here for you.

Spoiler alert: If you’re one of those people who doesn’t like spoilers, stop reading now! We have some juicy spoilers for you about the season 3 episode 12 of AMC’s “The Walking Dead.”

AMC Official Synopsis: “Rick has found his lost friend and is forced to make a decision that could change his life. Andrea grows suspicious of the Governor’s plans.”

On next week’s show Rick meets up with an old friend of his Morgan. Michonne, Rick and Carl go for a drive and come to the town where Rick use to be sheriff.  Carl is not pleased that Michonne is with them and complains.

They went to the town to find guns but find the gun cabinet in the sheriff office is empty. As they walk through the town they see signs and get attacked by a masked man. After much gun shooting, Carl shoots the man. They find out he is wearing body armor, he is only knocked out. When they remove the mast Rick finds out it is his old friend Morgan.

What they find where Morgan is living, Rick realize that Morgan has been living alone for some time and has lost his mind.  Rick tries to jog his memory and make him remember things.  Rick asks Michonne if she thinks Morgan is crazy and she replies, “I think he is dangerous!”

Meanwhile Michonne and Carl go to find a crib but Michonne soon realizes that Carl is looking for someone else.  Carl gets into a sticky situation and Michonne helps him find what he was looking for.  The result is Carl and Michonne bonds and Carl does not dislike her anymore.

The Walking Dead Season 3, Episode 12 “Clear” airs on AMC on March 3rd, 2013. Check out the preview videos from episode 12 below and let us know in the comments below what you think!