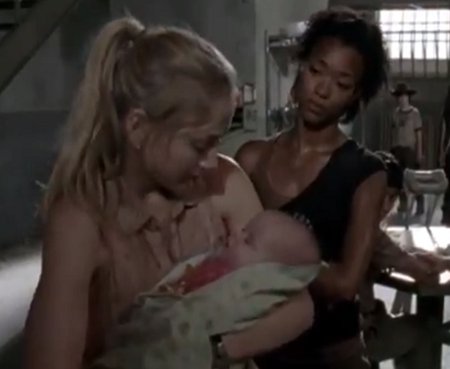 AMC has made all you zombie lovers wait a hecka long time for the return of The Walking Dead. We know you’re totally ready and eager to get back into the zombie apocalypse mayhem and drama, but until the show’s return, well, we’re not going to stop tossing previews and spoilers your way. If mild spoilers or sneak peeks that don’t really give too much away disturb you, then you may want to look away now.

The Walking Dead season 3 episode 9 “The Suicide King” will return February 10th. AMC recently released a fairly long sneak peek that we figured all you zombie hunters would greatly enjoy. In the sneaky-peek, we see everybody holed up in the prison. Eventually, in comes L’s baby, who is only a week old. It’s amazing the lil’ baby nugget is still kicking and breathing strong, and we just hope nothing horrible happens to this little bundle of hope.

“To be honest, we never thought we’d see another baby,” says the newcomer. “Beautiful,” she continues, admiring this gift of new life.

The scene is quite touching. Honestly, it doesn’t really give a whole lot away in terms of the plot or episode’s arc, so we’re interested to see where the scene heads after the part we’re given. Never quite know where the dead will take us.

On this episode, Andrea is in the arena and she recognizes Daryl. When she pleads with the Governor to save his life because he is her friend, he tells her that it is not up to him anymore. The arena — and the brutal, grotesque bloodsport involving zombies — will be the deciding factor.

Woodbury town folk will not be as quiet as they used to be in the second half of season three and Andrea will want to go and see her old friends. The Governor will question Andrea’s loyalty and we do see him doing what we all knew was going to happen sooner or later: he attacks the prison. As we’ve mentioned numerous times here on CDL, war is looming on the horizon. There’s no question about it. The only question now? Who’s going to make it out alive?