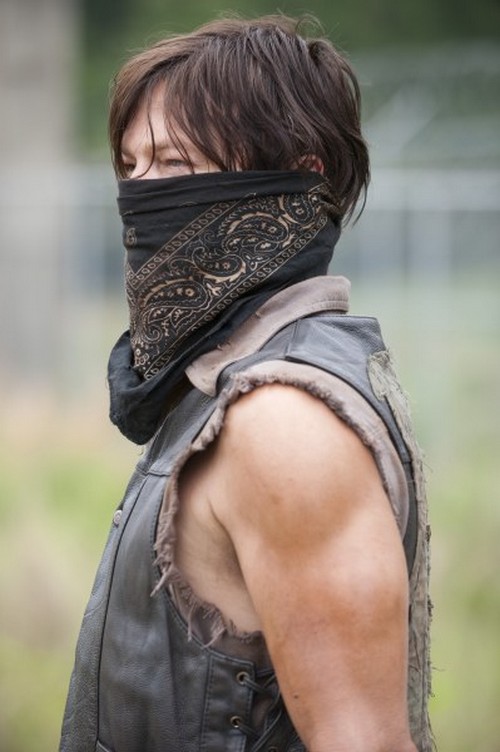 On last night’s season 4 episode 2 of THE WALKING DEAD someone puts a rat down by the prison fence (I’m going to take a leap and say it’s the Governor) which lures zombies all the more closer to breaking in on Rick and company.

Meanwhile Tyreese is safe and sound inside with Karen. He discusses the loss of Zach and how it has changed how looks at life and the time we have in it. Tyreese then starts singing her a song as he walks her to cellblock D. Tyreese tells Karen Good Night and leaves her safe and sound. (I know I know safe is relative on this show.)

Karen heads for the sink and as she is washing off she thinks she hears a noise and looks. She sees nothing and heads off to her cell. We see a few seconds later Karen did in fact hear something it’s Patrick as zombified as ever. He also heads into Karens cell but lucky for her the guy next to her makes a noise. Patrick shambles on in there and silences the guy for good. By which I mean he chews out his throat.

Morning arrives. Rick shuts off his alarm clock and wakes up Carl. Patrick is eating another person in another cell and the guy who’s throat he munched is with him and also very much a walker.

Glen and Maggie are so adorable, so adorable in fact that Glen agrees with me and decides to take a picture of her sleeping before he wakes her up for her shift, sadly the click of the camera wakes her up from her slumber.

Michonne is on her horse and heading out on her daily hunt for the Governor (psssssst he is closer than you think) and also to get supplies.

Carl wants Rick to give his gun back. Rick declines. Before this conversation can get to far out of hand the sound of gunshots ring out in the prison. In just a few minutes it is full on chaos. Rick takes out a knife to start stabbing the walkers in the head. Darryl is using his bow and rescues Glen when he almost gets it. Carl lets Michonne back in but she isn’t quick enough and gets bit by a walker.

Carol is getting ready to amputate some poor guys arm when she realizes that isn’t going to do any good because he also has a bite on his neck. The guy also realizes the unfortunate predicament he is in and ask Carol if she will take care of his two daughters for him (Lizzie and Mika.) when the time comes Carol is going to kill him but the oldest daughter ask her if she can do it instead. Carol gives her the knife, she walks over to her father and raises the knife but is unable to finish through, Carol takes the knife and does it. The two girls hold each other and cry. Carol tries and comforts them the best way she can.

Hershel thinks it’s the flu that caused Patrick to turn and warns them that they all could become sick. While they decide what to do. Rick wants Carl, Maggie and Michonne to stay away since they have yet to have come in contact with the illness. Carol thinks they should quarantine everyone who is sick and she is very concerned that all the children were around Patrick (this could be bad for little ass kicker, aka Judith). Karen and Tyreese happen upon this discussion and since Karen is coughing they feel it is best that she relocate to cellblock A for the time being. Karen is on board with that plan.

Darryl is outside digging graves for the ones they killed. Rick is concerned that he is making nothing but bad decisions and does not feel he can be in charge anymore. Darryl explains that he feels rick has done enough and is ok with him wanting to be left out of making decisions for the group. Before much more can be said Maggie begins to scream. It seems the rats have done the trick and the walkers are beginning to bust down the fence. They run over to the fence and help Maggie they start killing as many as they can as fast as they can. Rick hesitates but only for a second. Sasha realizes somebody fed the walkers rats. Darryl knows they can’t hold them off for long there are to many of them. Rick has a idea.

Carol ask Carl to help train the children to protect themselves and not tell his father. Carl tells her he won’t lie to his father.

Carol is talking with Lizzie and tells her she shouldn’t feel bad for the walkers. Lizzie agrees and then Carol puts a flower in her hair. Lizzie takes the knife in order to protect herself from any future attacks.

Back at his makeshift farm Rick is pouring gasoline all over the pig pen. Carl comes up and tells him about Carol and the weapon training. Rick thanks Carl for telling him about it but he is also going to let it continue. Rick then takes a match, lights it and sets the pig pen ablaze. Rick takes off his blood soaked shirt and throws it in as well. Rick goes and gets Carl his gun. Rick also takes his own back out.

Tyreese is taking flowers to Karen over in cell block A. When he arrives he notices a trail of blood that leads outside. Tyreese follows it and when he gets outside he sees Karen as well as another body burned.

If you cannot wait till next week, we have a spoiler for next week’s episode 3 “Isolation”  [CLICK HERE]