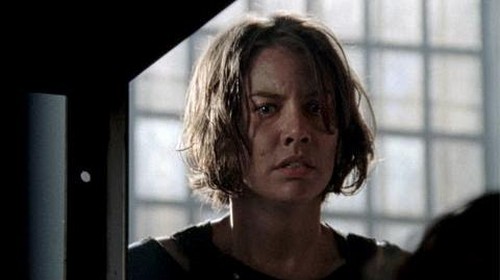 THE WALKING DEAD returned tonight and the residents of the prison not only have to deal with the threat of walkers, but disease running through the prison.  As usual, we will be providing you with the juiciest, previews and teasers out there.  We have not one but two sneak peek video and some insight for you below on what is going on next week episode, “Indifference.”

On tonight’s show the members of the group are becoming infected by the flu.  It’s a fast acting flu that moves fast.  Everyone knew tonight they would have to get it under control and fast.  Glenn started feeling sick and they all knew they need antibiotics – they agree to go on a mission to find them.  While Daryl, Michonne, Bob – and Tyreese went on the mission, Rick, Carol, and Maggie tried to keep things under control at the prison.  The shock of the evening is we found out that it was Carol who killed Karen and David.  WOWSER.  Did you watch tonight’s episode?  We did and we have a full and detailed recap, right here for you!

Spoiler alert: If you’re one of those people who doesn’t like spoilers, stop reading now! We have some juicy spoilers for you about the season 4 episode 4 of AMC’s “The Walking Dead.”

AMC Official Synopsis: “Obstacles are encountered by the group members on a mission to find supplies. Meanwhile, conditions at the prison get worse. “

On next week’s show group members, Tyreese, Bob, Michonne, and Daryl  head out to find supplies and they run into some walkers.  Sickness continues to spread through the prison with no cure in sight. Rumor has it at one point the only survivor left not suck is Maggie.

Two more survivors are suppose to be found this episode: Jack and Erin, to replace the characters that have died.  Perhaps they find them on the supply mission.  Erin is suppose to be a 20 something character that looks at life through, “rose colored glasses.”

The Walking Dead Season 4, Episode 4 “Indifference” airs on AMC on November 3rd, 2013. Check out the preview videos from episode 2 below and let us know in the comments below what you think!