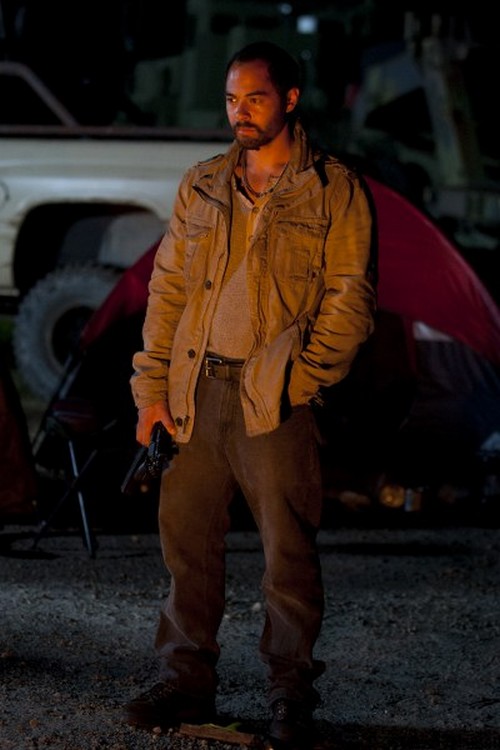 On last night’s season 4 episode 6 of THE WALKING DEAD, the shows starts with a flashback of right after the Governor was told to get the hell out of Woodbury. Martinez and Shumpert are with him. The Governor as we already know had gone above and beyond the call of crazy by this point. Martinez and Shumpert come to the realization that he is a few clowns short of a circus and take off while the taking off is good.

Back to the present and the Governor is siting in front of a fire watching a zombie aimlessly shamble closer and closer she falls in the fire and it then and only then that he shoots it. Better late than never I suppose. The following day he gets in his truck and drives. He then sets a house on fire because he apparently is also a pyro. The governor starts to aimlessly shamble down a road for lack of something else to set on fire. He notices some woman looking at him through the window of her apartment and decides he will head on over there with his flashlight and inspect it. The woman opens her door holding a baseball bat. Her name is Lily. Terra is her sister and she has got ammo for days enough to kill him for ten years, so I hear. The Governor hands over his gun and tells Terra to chill out already.

The two explain they have been in the apartment every since the world became one big Walker land. They ask if he plans on staying there, at first he avoids the question but when they act like two high school girls he tells them he is staying just for the night. Terra threatens to kill him if he dares to try anything. I’m sure the Governor by this point is thinking bitch don’t you know who I am. His name for all intent and purposes is Brian Harriott.

The Governor is sitting in his room either plotting and scheming or moping, it’s really anyone’s guess at this point. Lily the non hostile one of the two offers him some spaghetti o’s. He tells her he wants them but after she leaves them he tosses them out the window and opts to eat some food of his own.

Next day he decides to do a little recon and gets caught outside their apartment door by Terra. Instead of shooting him full of lead though she offers him some coffee. He sits down in a chair in front of a tv and becomes mesmerized by his own reflection. They are talking to him but he isn’t hearing them. He finally snaps out of it when Lily ask him to carry her father to his room. The man ask him of he has children of his own, he tells old man that his child is what made him a man. The old man ask him of he would go next door and retrieve his neighbors backgammon game.
The Governor is looking around another apartment with a flashlight and finds the game for the old man. He starts to head out but stops when he hears something. He goes in the bathroom and sees a wheelchair, he them notices a trail of blood and when pull the curtain back he finds what’s left of the guys neighbor in perfect walker form. The Governor being a nice guy and all that decides to stab the man in the head. He take a the guys pistol as a souvenir.

He returns with the game and the old man is grateful and they shake hands. Lily thanks him and he tells her she is welcome.

The Governor is back in his room now and is looking at picture of him his wife and daughter. He folds the picture so he doesn’t have to look at himself. I never would have pegged him as the self loathing type.

The next morning Lily just lets herself in to his room. She may be quick but he is quicker and he manages to hide the picture before she sees it. She offers him some supplies for the road. He tells her he is just fine. She throws him a bag full of stuff anyway and his gun. The governor tells her to do him a favor and not throw a gun at him and two can keep the damn thing because he has another one. He is even nice enough to show it to her. He then tells her in order to take out the walkers they have to be shot in the head.

Lily tells him how her father has lung cancer and is about to run out of oxygen. She tells him about a nursing home near by that has some oxygen tanks and that one would be enough. The Governor goes to the nursing home to get the oxygen and takes his new gun with because we all know what excellent target practice a Walker makes. Again he whips out his flashlight. He comes to a Walker strapped on a bed and ignores it. I myself would kill it. There is also one in a wheelchair but since it can’t stand up it isn’t any danger and he passes it by. There is one coming at him but he solves that problem by slamming a door in its face. He hits pay dirt and finds several tanks. He only manages to make it out with one however because the Walker he slammed the door on got pissed and got some friends.

The Governor heads over the oxygen tank and the heads back to his own room. Lily comes in and offers to be his personal nurse for the day. It’s not as naughty as it sounds. She is just fixing the little boo boo he got on his head while running with the oxygen tank. Lily tells,him that her little girl Megan thought he was her father. Apparently. The little girls dad left three years ago and never came back. Megan walks in and her mom tells her to watch him until she gets back.

Megan wants to know what happened to his eye. He tells her that something bad happened and now it’s gone. Megan realizes it was probably bad for her to ask him about it. The Governor tells her not to worry and then says he will tell her. Megan pinky swears she won’t say anything. He looks unsure of what a pinky swear is.

The Governor finally decided to shave. He is playing Chess and Megan tells him it looks hard. He tells her it is. Then she does something absolutely adorable she picks up the king and puts a eye patch on it. He takes it and ask her if she would like to play a game with him. Lily interrupts and takes Meagan to see her grandfather who has been dead long enough to turn. The Governor makes them all get out and sure enough he is in full Walker mode. The Governor bashes the old mans head in with the oxygen tank. Why? He has a gun. No need for bashing out brains. He goes outside and digs a grave. Lily helps him bury him. When he gets back inside Megan is terrified of him. He heads back to his own room and since he has gone one to many days without setting a fire he sets the picture of his family ablaze.

The Governor has all his stuff and is heading out. Lily wants to go with him. He tells her no. She offers this as her rebuttal. ” I know we’re not the family you lost, but for now, you’re stuck with us.” Which brings us to the title of this episode.. By which I mean they are the “live bait” and he falls for it hook,line, and sinker. Well played Walking Dead.

The Governor is driving and Lily and Terra wonder where they are headed. He says they will just follow the road. Which makes me wonder if all this happened before we saw him standing outside the prison or if he is headed back there.

It’s night time and they are all sleeping in the truck. Well Terra and Megan are, he and Lily are busy getting busy.

They are all walking down the street when the Governor hears something. It is the Walking mother load. He tells them to drop their stuff and run. Megan wasn’t paying attention and the Governor has to pick her up and run with her. They all run into the woods. The Governor falls into a hole full of Walkers with Megan and demolishes them in order to protect her. Megan is terrified and he picks her up and holds her. She ask if he is going to keep her safe. He looks up and sees Martinez. He tells Megan he crosses his heart.