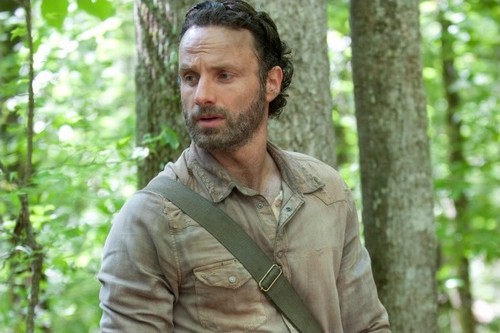 THE WALKING DEAD returned tonight and the old Governor is back, any drop of humanity we saw last week is gone.  I cannot wait to see what happens in the mid-season finale next week.  Good news, we have have managed to get our hands on a sneak peek video and some insight for you below on what is going on next week episode, “Too Far Gone” .”

On tonight’s show the Governor is now hooked up with Martinez, his old henchman.  They have a camp outside the prison.  The Governor and Martinez’s men go on a mission and they find the person they are looking for decapitated with a message, looks like someone is mad.  Meanwhile the Governor goes playing golf with Martinez and that is the end of Martinez, he becomes zombie food thanks to the Governor.  Seems the Governor was a tad jealous because Lily felt safe with Martinez. Did you watch tonight’s episode?  We did and we recapped it right here for you.

Spoiler alert: If you’re one of those people who doesn’t like spoilers, stop reading now! We have some juicy spoilers for you about the season 4 episode 8 mid-season finale of AMC’s “The Walking Dead.”

AMC Official Synopsis: “After things begin to calm at the prison, Rick and the group face imminent danger.”

On next week’s show which is the mid-season finale not that the flu has gone and everything has more or less calmed down at the prison, the prison gets brutally attacked by the Governor.

The old Governor is back and when he is outside the prison he sees Hershel and Michonne – remember the Governor hates Michonne and he decides he wants to attack the prison.  He tells his new group there is nothing between them and the people in the prison but a fence, if they are willing to take the prison they can.  The Governor and his people have a tank and they come up to the fence of the prison and Rick tells him they are not leaving.  Everyone will fight and as it flashes across the screen, “Some will Fall.” So we may lose a favorite next week.  Once thing for sure there is a lot of fighting and a lot of blood.

Three of the shows front runners Steven Yeun, Andrew Lincoln and Norman Reemus have leaked some tidbits about the finale saying:  Steven, who plays Glenn on the show has said this about the finale, “The finale is huge. It’s the story we’ve wanted to tell for the longest time. Everybody is going to be watching with their jaws dropped.  You should never regard anyone as safe from any danger on this show.”

Andrew who plays Rick said, “The mid-season finale is the biggest thing we’ve attempted, I think, so far in our show. I think the crew, and Ernest Dickerson, who directed it, everybody busted their guts to do that episode. Darrell Pritchett, who does the special effects — he’s the man with the dynamite, was the busiest man I’ve ever seen. It was thrilling. Just thrilling. It just felt like an incredibly exciting episode. And then in the [final eight of the season], it’s like we’re spinning out into orbit, and it’s a completely new show. It’s really, really exciting.”

Norman who plays Daryl said about the finale, “I will say that we just wrapped the mid-season finale last night of The Walking Dead, mind-blowing. Minds are going to blow up, it’s so crazy, it’s so good. We thought last season was real good. This season’s crazy good. It’s nuts, you’ll love it.”

The Walking Dead Season 4, Episode 8 Mid-Season finale “Too Far Gone” airs on AMC on December 1st, 2013. Check out the preview videos from episode 8 below and let us know in the comments below what you think!