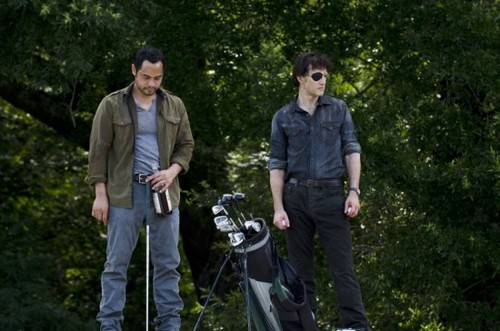 Tonight on AMC THE WALKING DEAD continues with all its gory goodness. Tonight’s episode is called, “Dead Weight” and on tonight’s show the addition of new members may threaten peace.  If you happened to miss the last episode, don’t worry. We’ve got you covered. Click here for a full recap of the last episode to find out what you missed!

On last week’s show we got to find out what the Governor had been up to and the whole episode was about him.  It seems he was stumbling around for a while a broken man until he came to an apartment building and met some new survivors: Tara; Melody and Megan.  He taught the survivors he found how to fight walkers and he almost seemed to have a bit of his humanity back.  It seemed Philip (the Governor) was back.  Finally, as the Governor and his new family were in the woods the Governor looked up and it was Martinez.  Looks like his old life was about to collide with his new life.

On tonight’s show the Governor will be featured as we race towards the mid-season finale December 1st, 2013.  The Governor is now hooked up with Martinez, his old henchman.  They have a camp outside the prison.  The Governor and Martinez’s men go on a mission and they find the person they are looking for decapitated with a message, looks like someone is mad.

Tonight’s The Walking Dead Season 4 episode 7 is going to be exciting, and you won’t want to miss it. So be sure to tune in for our live coverage of the new episode of The Walking Dead — tonight at 9PM EST! While you wait for our recap, hit the comments and let us know how know how excited your are for the new season of TWD and what are you hoping will happen this season. Check out a sneak peek of The Walking Dead “Isolation” below! Don’t forget to come back at 9PM.

The Governor mentions to Lily that he is going out on a supply run; she says she will set up a nurses tent for the people of this camp. The Governor is walking outside with the group of people and is already getting made fun of for his one eye by one of the guys. They are walking through a forest and are looking around; The Governor takes out his gun and they question what he is doing. The Governor walks up to a corpse died up to a tree that’s missing its head with a paper nailed to him saying “LIAR”. Lily is back at the camp taking care of the peoples wounds; she meets a girl named Alisha who is part of the marines. The Governor and the group are moving up to a shed; Martinez notices another corpse with a note nailed to him saying “RAPIST”; the groups moves on. They find another corpse at the front of the shed that says “MURDERER”, the guy still has a piece of his head left unlike the others. They knock on the front door and Martinez hears someone inside; The Governor pulls out his gun leading the way. They are looking through all the rooms in the building; one of the guys gets jumped by a walker and The governor beats her head in with a flashlight. The Governor finds another one and bashes the walkers head in with his flashlight again.

Martinez sits down with The Governor and tells him he looks like he has changed; The Governor says that he has changed. One of the other guys come in with beers and canned food; he starts passing out beers to all the guys. The guy says he can never tell whether The Governor is winking or blinking with his one eye; Martinez says he has always been a very cold guy. One o the guys mentions he was an ice cream truck driver and then became a tank driver for the USA army; when the breakout happened he took his tank with him. They ask The Governor what he did when it all went bad and simply says he survived. The Governor and Martinez are eating with his new found family; they are talking about their old camp and The Governor kind of walks off looking very uncomfortable and says to leave the past in the past. Tessa and Alisha both leave to go do their own thing; The Governor is asked by Meghan to fix a leak on the roof of their trailer. The Governor gets some duct tape and Martinez offers to golf with him on the top of one of the trucks; Martinez misses his first swing and talks about how the other guy who use to be with him died of being way too reckless and died by a walker; The Governor says that they are living pretty well now. Martinez says the family The Governor has found saved him; The Governor believes he can keep them completely safe. The Governor hits Martinez in the head with a golf club and kicks him off the top of the truck; he then pulls Martinez away and throws him into a pit full of walkers.

The Governor is shaking in the trailer and the girls come home; he says he had a bad dream is all. Lily asks him what it was and The Governor says he can’t remember; the guys found what was left of Martinez in a pit and that he must have got drunk and fell in. The guy decides to take leadership of the camp but the people want a vote; one guy calls Tessa bitch and that she should shut up. The guy goes up to The Governor after and says they are going on a hunt; he asks The Governor to help him lead. One of the men find another camp of people; at least 10 or less with a lot of supplies. The guy thinks they should take them in; but the other declines the offer and says they should take what they need. The guy refuses to steal from the people and to find their own supplies; The Governor sits there looking at the camp. They find a couple of squirrels and some condensed milk; The Governor starts walking off from the two guys. The Governor finds a camp full of corpses; The Governor mentions how people must have been killed by a bunch of other people. The guy goes over and stabs one of the remaining severely injured people in the head; fearing he’d turn. The Governor gets back to the truck and tells the girls to back their things; Lilly asks why and The Governor says it isn’t safe anymore. The Governor tells her that things are going to go wrong very soon and says that they have to leave no matter what; they are now driving away from the camp. The Governor then stops in their tracks and tells everyone to stay in the car. The Governor gets out and finds a massive number of zombies stuck in some deep mud.

The Governor is making a complete barricade around the camp and are burning the walkers inside of the pits; The Governor says that they saw what people can do out there and that if they find people that they should avoid them then tells them about what they saw. The Governor says they might be able to find a better place if they are wiling to fight for it; Lily says this is their home and that they don’t need another place. The Governor is cleaning his missing eye; Lily comes in and tells him he doesn’t have to do anything. Meghan gets grabbed by a walker that found its way into the camp; Terra walks over and tries to pull him off; Meghan is screaming and then The Governor shoots the walker in the head. The Governor drives out into the forest and we see him staring at the prison; he pulls out his gun while watching both Rick and Carl farm. The Governor then walks in the forest and hears people talking; he sees Michonne and then takes aim at her.