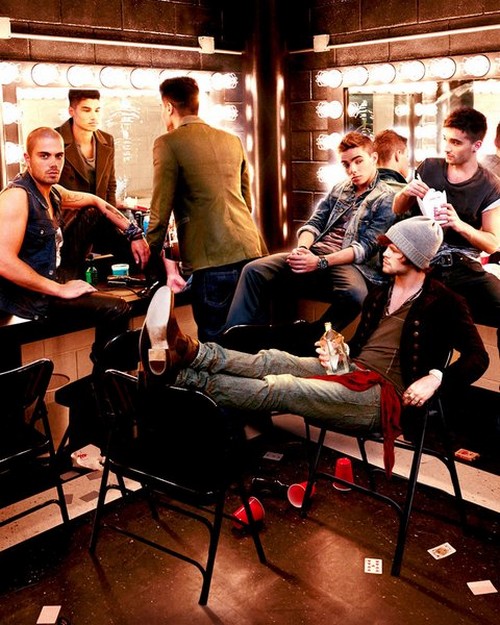 Tonight on E! their new musical reality show THE WANTED LIFE continues with an all new episode called, “Crazy Like A Pop Star.”  On tonight’s show the band shoots their video for their new single, but not all of them are happy with the final results.  Did you watch last week’s forth episode, it was lots of fun?  If you missed it we have a full and detailed recap for you, right here!

On last week’s forth episode the boys were at Scooter Braun’s office when they received the news that they’ve been booked to perform for the President and his family. Of course, they went into hysterics and started screaming and jumping, before admitting that they already knew.  They also revealed their desire to meet the family’s dog, which took Scooter by surprise. However, a fight started to form when Nano suggested that Jay see a vocal coach. Of course, this hurt Jay’s self-esteem, and you there was a lot of underlying tension throughout the episode thanks to Nano’s comment.

On tonight’s show Max’s unexpected late night guests causes everyone in the house to question their safety. The band shoots their video for their new single, but not all of them are happy with the final results.

Tonight’s episode 5 of The Wanted Life airs tonight at 10PM on E!  We will be covering the show and bring you all the details of the shenanigans of Max, Siva, Jay, Tom and Nathan, so don’t forget to tune in.  While you wait for the recap, hit the comments and let us know how excited you are about getting a birds eye view of The Wanted!

side of the guys from The Wanted. On tonight’s episode Max’s partying is absolutely clashing with Siva’s girlfriends’ nocturnal schedule. Things come to a boil when Max brings two strays home as Nareesha tries to be creative. She is a shoe designer and swears that nighttime is the best time to work but she can’t focus with his shenanigans. Siva talks to Max and it does zero good because Max suggests maybe Nareesha should leave.

Kelsey is also struggling on this episode. The press ran unflattering photos of her legs that showed cellulite. She issued to being surrounded by the guys and she believes that they think she is tougher than she really is.

On one particular morning Nareesha and Kelsey are on the war path because they woke up with random chicks on their beds asleep. Maz realizes that the girls have felt unsafe and he needs to be much more careful. Meanwhile Tom takes Kelsey to diner and gives her a charm bracelet as a special token of his appreciation of all the good that she brings to his life.

The boys have decided to channel the Backstreet Boys in their video for Walks Like Rihanna. They had a hard time not laughing while running through choreography in their ms matched white outfits. Siva decides to treat Nareesha to a great dinner for their 5th anniversary. It’s on a candlelit table in the backyard with Max and Jay serving as the waiters.

The episode closes with more of the finished video and Siva is not happy because he wasn’t featured enough. Tune in next week for more of The Wanted.