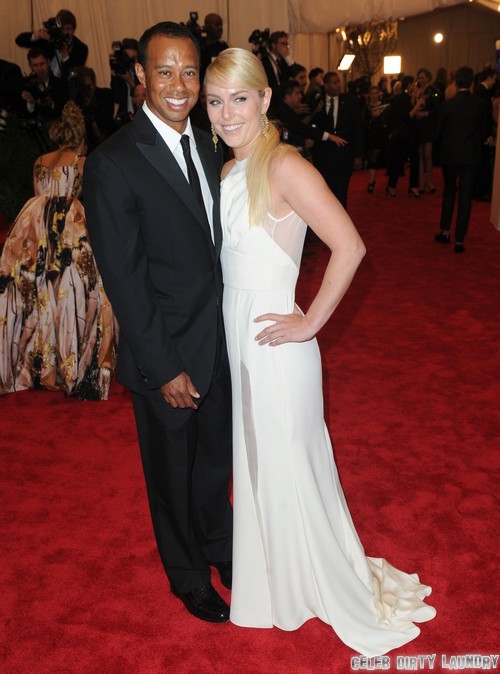 I have to wonder if when Lindsey Vonn first hooked up with Tiger Woods she believed somewhere in her head or hurt that she would be the one to change him. I wonder if she thought that she could save Tiger from his narcissistic, self-absorbed self and turn him into a respectable man. If so, it’s certainly not working. Aside from Tiger’s obvious character flaws, like being a block of ice and having zero sense of humor, it seems his wandering eye is starting to show, even when he’s with Lindsey.

Not only is Tiger looking, but he’s touching too. According to the May 27th print edition of Star, Tiger recently spent an entire afternoon with one of his famous former gal pals – on the down low of course! While Lindsey doesn’t yet know about Tiger’s hookup, she has been flipping out over his wandering eye. She has noticed that when they go out he spends a lot of time eye-balling other women and this little habit is starting to cause real problems for the couple.

Tiger and Lindsey hit the red carpet for the Met Ball but that was an appearance that almost didn’t happen. Tiger’s creepy behavior is beginning to embarrass Lindsey and she’d rather not be around him at all than to have to suffer through it. Here’s the thing though. She is staying put for now because she’s trying to launch her own perfume and make up line. Being attached to Tiger brings her a bigger type of celebrity, the recognition that she believes is necessary to be a successful business woman.

How long do you think that Lindsey will hang in there with Tiger? It'[s obvious that this guy is unable to be loyal, don’t you think? Tell us your thoughts in the comments below!